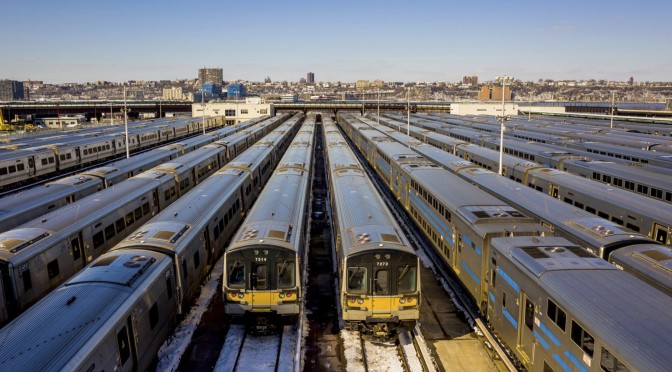 In 2015, MTA Long Island Rail Road‘s (LIRR) rail cars traveled an average of 208,383 miles before experiencing a break down that caused a delay, marking the railroad’s best record for mechanical reliability since 1981.

The number surpasses the previous year’s record by more than 2,000 miles and was 18 percent above the railroad’s goal of 176,000 miles, LIRR officials said in a press release.

The railroad’s current mean distance between failures has risen from 50,000 miles in 2005 and from 150,000 in 2010. LIRR credited its “reliability centered maintenance” strategy for the improvements. The strategy was put into place in 2009.

Under this approach, all rail cars are slated for specific types of inspections and maintenance based on the time since each car’s last maintenance procedures. The strategy uses manufacturer data and real-world observations to govern schedules for replacement of rail-car components. This ensures that components are replaced before they fail, LIRR officials said.

Meanwhile, MTA Metro-North Railroad‘s rail cars averaged a distance of 199,838 before breaking down. The figure represents the commuter railroad’s best mechanical performance in its history.

The MTA and the Connecticut Department of Transportation (CDOT) have brought a new fleet of rail-cars known as M8s to the New Haven Line, which is Metro-North’s busiest line. They replaced nearly all of the older M2, M4, and M6 cars, which date back to the 1970s and 1980s.

A total of 405 new M8 units were put into service.

“The M8 cars have proved to be one of the best and most important investments we’ve made in recent years and I am not surprised at how well they’ve been performing,” said CTDOT Commissioner James Redeker.