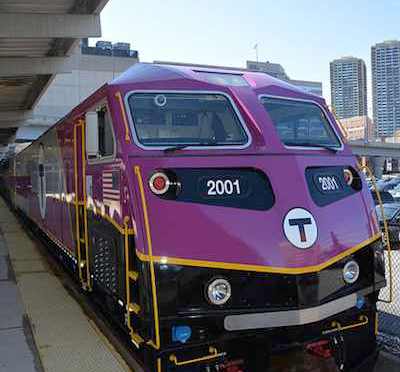 Crews will replace as many as 30,000 ties, Keolis officials said in a press release.

The company will perform and oversee much of the work.

The track on the Framingham-Worcester Line was built and maintained by previous railroads using different design and maintenance standards than the MBTA. When the agency took control of the line in 2012, there were insufficient records available about the original installation of the rail, according to Keolis.

Such records help engineers verify that the rail will respond to heat variations between winter and summer seasons, Keolis officials said.

To compensate for the unknowns, the MBTA has either replaced rail or de-stressed sections of rail to ensure the line’s safety. That work is continuing this spring between Worcester and Framingham, Mass., and between Newtonville and Wellesley Farms, Mass.

“Commuter rail’s performance on the Framingham-Worcester Line has improved dramatically thanks to the work we and the MBTA have already completed,” said Keolis General Manager Gerald Francis. “This next round of track work will help move trains more efficiently and finally end the speed restrictions riders have dealt with for many years.” 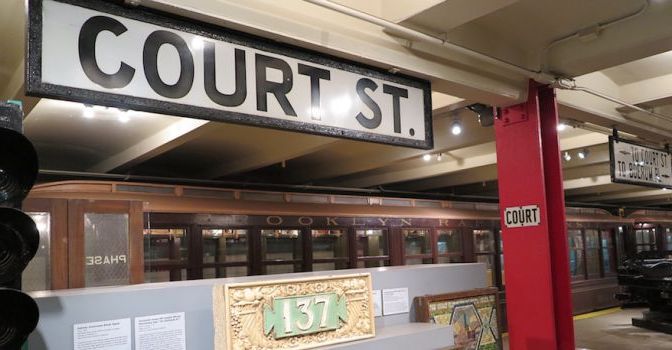 New York’s Transit Museum is in the former Court Street station on the corner of Boerum Place and Schermerhorn Street in Downtown Brooklyn.

The station opened in 1936, but closed 10 years later because it wasn’t used enough, explained Regina Asborno, director of the museum. There were plans at the time to eventually connect the station to the Second Avenue line in Manhattan, but that never happened.

Since the museum is inside a former station, the entrance is just like any other entrance to a below-ground subway station. There is also a handicap-accessible entrance, but this is the main entrance.

There was a shuttle train that operated at Court Street, but it only brought passengers to one other station about three blocks away, so it wasn’t necessary to keep. It was turned into a museum in the summer of 1976.

The first exhibit in the museum is called “Steel, Stone, and Backbone: Building New York’s Subways, 1900-1925.” It takes visitors through the stages of building the subways. Asborno said many of the pictures they have of the construction were taken for insurance purposes at the time. Since the construction was quite dangerous and could potentially affect the buildings above ground, photographers were hired to take pictures along the routes of the first tunnels, she explained.

On the original platform and tracks of the station, the museum features vintage trains that were used starting in 1904. The train doors are open so people can go inside.

Asborno said there are also vintage buses, but they are too large to be shown at the museum. They are kept in various MTA bus depots and brought out for special occasions, such as the annual Bus Festival in September.

Take a step back to 1904 by walking through the oldest trains at the museum. The trains were used on the elevated tracks at the time, Asborno said. They are made of wood, which makes them lighter and more functional on elevated tracks but not practical for underground tracks.

These trains only had doors at either end of the cars, and at each stop, the gates had to be manually opened by an operator on each car. The operators communicated with the conductor using bells on each car to let him know he could start the train again.

The term straphangers, used to describe commuters, comes from the straps that hung from the top of these original cars. 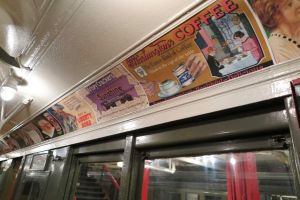 Advertisements have always been a part of the subway system. While the ads on each of the cars are replicas of originals, they give visitors an idea of the time period. Asborno said trains have a 40- to 60-year life span, so the ads would have changed many times in each of the cars.

A 10-car trial train was built in 1949 in anticipation of the Second Avenue subway line. Each car cost $100,000 to build, which is how it got its name, The Million Dollar Train. At the time, “The New York Times” deemed it the “car of tomorrow” because of its modern look, including new fluorescent lighting. But the train was never in full operation, as the Second Avenue line has yet to be built, and the cars were redesigned to operate with existing trains.

The newest car in the exhibit is just like many that run today. Asborno said this car is a favorite for kids because they usually aren’t allowed to explore the cars when they ride the subway. It’s also used for programs to help people with social or intellectual disabilities learn social skills to help them ride the subways, Asborno said. 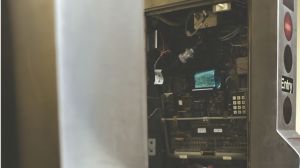 Remember when the subway fare was only 15 cents? Neither do we, but you can see what the turnstiles looked like when it was that cheap. The earliest turnstile from 1904 didn’t even have a spot for coins, tokens or cards. Commuters would buy their tickets, hand them to an operator and the operator would allow them through the turnstile by pressing a pedal.

The “Bringing Back the City: Mass Transit Responds to Crisis” exhibit gives visitors a behind-the-scenes look at how the MTA operates. There are first-hand experiences from MTA employees about the attacks on 9/11, the 2003 Northeast Blackout, the Blizzard of 2010, Hurricane Irene and superstorm Sandy. Asborno said people often don’t realize how many different jobs there are in the MTA, which employs over 60,000 people.

The Transit Museum is open Tuesday through Sunday. Admission is $7 for adults and $5 for children and senior citizens.

Investment in private inventories contributes to the expansion of real GDP, American Trucking Associations Chief Economist Bob Costello said in comments after a presentation to the conference. Cutting those business inventories pushes GDP down.

In 2014, inventory investment added 0.05 percentage points to annual GDP growth of 2.4 percent, Federal Reserve Bank data show. In 2015, that figure leaped to 0.17 points out of 2.4 percent growth. U.S. GDP growth would have been closer to 2.2 percent without the buildup.

GDP growth seems to have evaporated in the first quarter, after the economy expanded only 1.4 percent in the fourth quarter. The Federal Reserve Bank of Atlanta’s latest “GDPNow” estimate of first-quarter economic performance puts GDP growth at 0.6 percent in early 2016.

Fourth-quarter growth was actually 0.4 percentage points greater than the U.S. Bureau of Economic Analysis anticipated in its preliminary estimate, in part because the expected draw-down in private inventories wasn’t as great as economists thought it would be.

“Inventories remain bloated, well above historical average,” Lee Klaskow, senior analyst for transportation and logistics at Bloomberg Intelligence, told NASSTRAC shippers. The national average business inventory-to-sales ratio in February was 1.41, up from 1.37 a year ago.

The “optimal” range for the general business inventory ratio may be 1.30 to 1.35, Costello said.

“People would like to see the ratio come down 20 to 30 percent, but it will take time because the demand is not there,” Klaskow told NASSTRAC. “High inventories should be an issue that will be with us for the remainder of the year, if not into 2017, unless we all go shopping real soon.”

Inventories have been rising since the recession, but the inventory-to-sales ratios spiked following 2014, driven higher by stronger consumer demand that year and the West Coast ports labor dispute, which led many shippers to import earlier in the season and build up inventory.

“At the end of 2014, many shippers were telling me we can’t have that happen again,” Costello said. “They said we need to carry a little more inventory, have a little more of a cushion. Now you have too much inventory on hand and everybody says it needs to come down.”

In late 2014, inventory-to-sales ratios that had reached a plateau in the “soft patch” suddenly shot upward, and they’ve been climbing since. Shippers haven’t forgotten how to manage inventory, Costello said; they’re simply keeping more, and having difficulty forecasting demand.

Unusually warm weather last December, for example, cut deeply into demand for winter clothing at a time when stockpiles of coats, hats, gloves and other seasonal items had peaked. Retailers that had “invested” in inventory to avoid out-of-stock moments in stores had too much stock.

The rapid increase in the growth of online shopping also complicates inventory management as it reconfigures not only sales models, but how retailers source, store and ship goods.

Shippers at NASSTRAC and in other interviews have told JOC.com reducing inventories is a priority in 2016, but de-stocking is much harder than stocking. Everything depends on the consumer. Weak consumer demand means stockpiles of goods are likely to be reduced slowly.

If low unemployment and rising wages spur U.S. consumers to open their wallets wider this summer, inventory may fall more rapidly, though that could also reduce the support private inventory investment lends to GDP, cutting into GDP growth. Imports also subtract from GDP.

Greater personal consumption expenditures and fixed residential investment — more consumer spending and more housing starts — could help fill the gap, however, along with government infrastructure spending and, more unlikely, an increase in exports, all of which contribute to GDP.

Costello expects U.S. GDP to increase about 2 percent in 2016, compared with 2.4 percent the past two years. “That’s not good, but it’s not contraction either,” he said. “This is a very mature economy. If you’re sitting around waiting for 3.5 percent growth, don’t hold your breath.”

THOMASTON, CT –  Volunteers from the Railroad Museum Of New England (RMNE), the Naugatuck River Revival Group (NRRG), O&G Industries, and the Boy Scouts completely exceeded all expectations on Saturday by removing enough tires to fill two 30 yard dumpsters from an area less than 3 miles long between the Naugatuck River and CT Route 8 in Thomaston and Watertown. More than 20 people devoted their Saturday to clean up the environment and pull tires both big and small.
Volunteers rode the train to Jericho Bridge. There they pulled the tires from the riverbank and brush and rolled them next to the Naugatuck Railroad mainline. From there a tie crane lifted them into a dump car. The train dumped the tires at Thomaston Station where a bucket loader lifted them into dumpsters. For the trial run, two teams started at Jericho Bridge, one on each side of the mainline and worked their way south and one team started at Frost Bridge Road and worked their way north. After lunch, volunteers returned to work south of Frost Bridge Road and pulled out more tires.