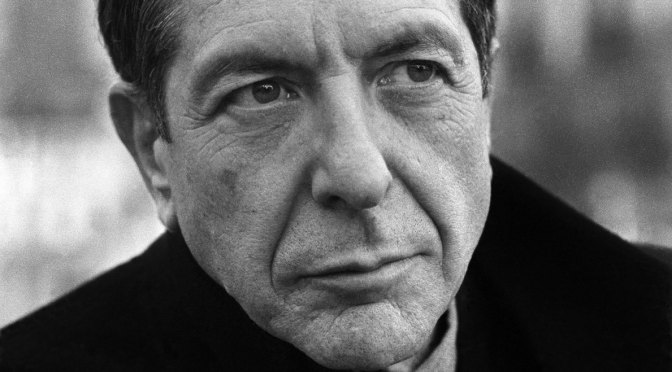 Leonard Cohen, the baritone-voiced Canadian singer-songwriter who seamlessly blended spirituality and sexuality in songs like Hallelujah, Suzanne and Bird on a Wire, has died at age 82.

“My father passed away peacefully at his home in Los Angeles with the knowledge that he had completed what he felt was one of his greatest records. He was writing up until his last moments with his unique brand of humour,” his son Adam told Rolling Stone.

Cohen, also renowned as a poet, novelist and aspiring Zen monk, blended folk music with a darker, sexual edge that won him fans around the world and among fellow musicians like Bob Dylan and R.E.M.

Canadian Prime Minister Justin Trudeau led tributes to the singer. “It is with deep sorrow that I learned today of the death of the legendary Leonard Cohen,” Mr Trudeau said.

Cohen was born in the Westmount section of Montréal. 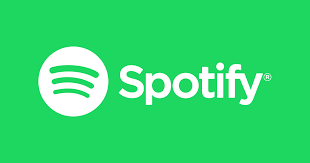 Spotify surprised industry observers by becoming one of the most high-profile cloud customers for Google, which is trying to shake the image that it can’t compete with Amazon and Microsoft.

Google scored a coup with its latest big-name cloud customer — and for a company that often touts pricing as a key benefit, it was higher-level services that made the difference this time.

Spotify, the popular music streaming service, plans to migrate nearly all of its privately hosted back-end workloads to Google Cloud Platform. The firm grew to where it had to consider building its own data centers but opted against such a move due to the cost and required expertise, instead choosing Google to help expand its big data capabilities.

“Google is also the world champion at pushing little streams of constantly changing data to individual users, so Spotify is picking the perfect infrastructure,” said Carl Brooks, an analyst at 451 Research in New York.

Spotify has tens of thousands of machines across four data centers worldwide. It started working with Google about 18 months ago, and the goal is to have a “huge chunk of infrastructure” migrated to Google Cloud Platform over the next 18 months, said Wouter de Bie, big data architect at Spotify. The company serves a small group of users from the platform already.

“The main [reason] why we chose Google was their tooling for data processing and data scientists,” de Bie said. “Google is pretty much ahead of the curve when it comes to technology dealing with vast amounts of data.”

Read more of this story 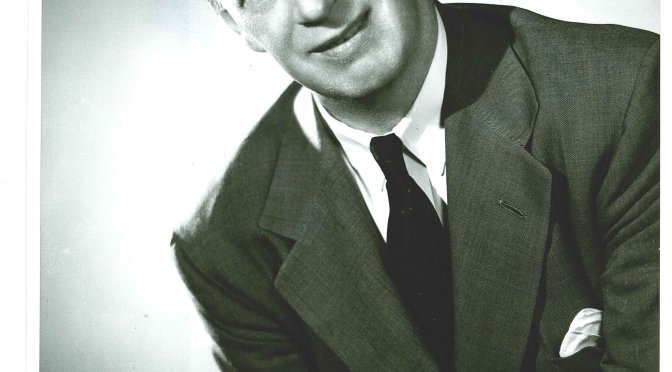 “I’ll Be Home for Christmas” remains one of the most beloved Christmas songs of all times, and it gives more to St. Lawrence University than just a special holiday feeling.

Written by J. Kimball “Kim” Gannon, a 1924 graduate of St. Lawrence, along with Walter Kent and Buck Ram, the song was popularized by Bing Crosby in 1943 and became a top-10 hit. Recorded by Decca Records, the song touched a tender place in the hearts of Americans while it was embroiled in World War II, and it earned Crosby his fifth gold record. Because of its personal yet widely appealing lyrics, “I’ll Be Home for Christmas” has lasted well beyond the tumultuous period of war and separation.

Born in Brooklyn in 1900, Gannon went on to write a number of popular songs during the swing era. He also penned St. Lawrence’s alma mater, “Alma Mater.” Campus lore has it that he wrote in the fall of his senior year on his landlady’s piano.

Gannon went on to a successful career as a lyricist, with some 200 popular songs to his name and three Academy Award nominations. Some of his more popular tunes include big-band standards “Moonlight Cocktail,” recorded in 1942 by Glenn Miller; “A Dreamer’s Holiday,” recorded in 1949 by Perry Como; and “I Understand,” recorded at different times by Nat King Cole, Dave Brubeck and Jimmy Dorsey. 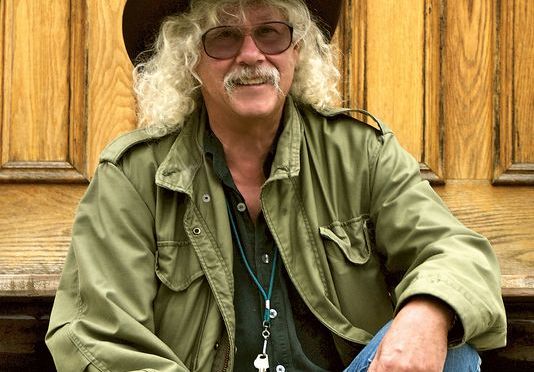 In his long and colorful songwriting and recording career, Arlo Guthrie has never had a chance to not think about Alice.

That’s because his die-hard fans, and even the casual ones, who come to an occasional show request the folk anthem Alice’s Restaurant Massacree any time he performs.

But as gracious a performer as he can be, Arlo does not always comply. After all, the iconic tune — which is 50 years old and was inspired by a youthful encounter with the law after a 1965 littering incident, as well as the Vietnam War draft — is 18 minutes long. Arlo mostly tours with other musicians, including various members of his extended family, with rich collaborations and lively sing-alongs.

Each year at Thanksgiving radio stations around the country spin the tune, no one more fervently than WMMR 93.3 FM’s Pierre Robert, who plays multiple versions of the song multiple times during the holiday.

Thank you Sean for the great picture at the top.

See a story on Alice’s Restaurant 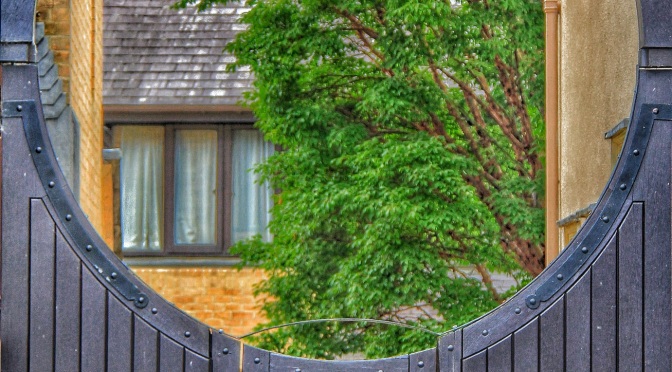 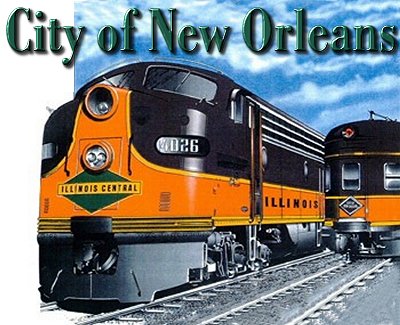 “Twilight of American Rail Travel” means different things to different people. To me, it meant the period in the 1960’s until Amtrak when passenger service went downhill. More specifically, it was the “Empire Corridor” running along the Mohawk and Hudson Rivers to New York City. Before the “twilight”, well maintained, well patronized New York Central trains ran this route. When Amtrak began in 1971, service was sloppy, not as well patronized, and equipment was very “worn”.

My favorite song is “City of New Orleans” written by Steve Goodman and sung by Arlo Guthrie. It talks about the same period, but on the Illinois Central Railroad. Lots of similarities!

Found a Johnny Cash video of the song we thought you might enjoy.

Yes, rode on train like that too. Although lot of those cars were “head end equipment”.

Loss of that mail was what really did in rail passenger service. Always heard stories of how President Lyndon Johnson pulled the mail off trains to pay off his airline buddies for political favors. Imagine! Entrusting our mail to people who seem incapable of moving our luggage between two cities and not losing it!

“All along the southbound odyssey. The train pulls out at Kankakee. Rolls along past houses, farms and fields. Passin’ trains that have no names, Freight yards full of old black men And the graveyards of the rusted automobiles.”

Yes, the Hudson Valley was in the process of change. Industry was gone and the “yuppies” had not yet built their country homes. Lot of abandoned factories, rusted rail sidings.

“Good morning America how are you? Don’t you know me I’m your native son, I’m the train they call The City of New Orleans, I’ll be gone five hundred miles when the day is done.”

Yes, the New York Central, was New York State’s Native Son. It was one of the biggest factors in making New York great. 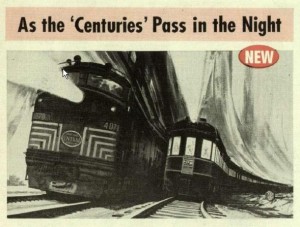 “Dealin’ card games with the old men in the club car. Penny a point ain’t no one keepin’ score. Pass the paper bag that holds the bottle. Feel the wheels rumblin’ ‘neath the floor. And the sons of pullman porters And the sons of engineers Ride their father’s magic carpets made of steel. Mothers with their babes asleep, Are rockin’ to the gentle beat And the rhythm of the rails is all they feel.”

Never any offense to the train crews. Railroad problems came instead from “greed run rampant” at railroad headquarters in Philadelphia. Passengers were only the ones who hadn’t or couldn’t get enamoured with America’s “Car Culture”.

“Nighttime on The City of New Orleans, Changing cars in Memphis, Tennessee. Half way home, we’ll be there by morning.”

How about changing engines at Harmon?

“Through the Mississippi darkness Rolling down to the sea. And all the towns and people seem To fade into a bad dream And the steel rails still ain’t heard the news. The conductor sings his song again, The passengers will please refrain This train’s got the disappearing railroad blues.”

Even the huge Chevrolet plant in North Tarrytown would be gone by the end of the 20th Century and turned into condos!

“Good night, America, how are you? Don’t you know me I’m your native son, I’m the train they call The City of New Orleans, I’ll be gone five hundred miles when the day is done.”

One final note, if you are a fan of Arlo, you will appreciate a WebPage about Alice”s Restaurant

Find out about Achievement and Fair Promise