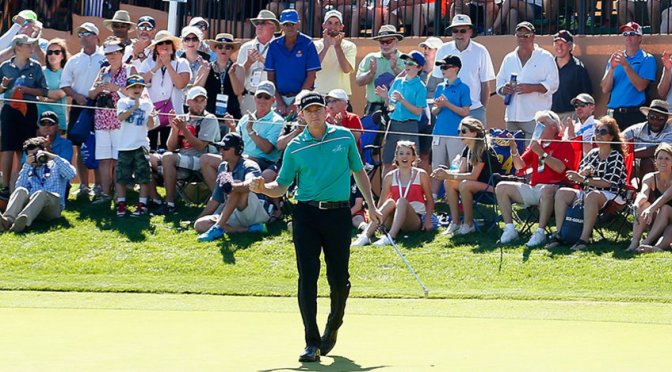 SAN ANTONIO — Jimmy Walker spent the entire week battling the elements at TPC San Antonio. So when he arrived at the 18th hole with a four-shot lead, he finally allowed himself the chance to soak up the moment.

For a kid who grew up coming to the Valero Texas Open, the walk up the last was a surreal experience that almost left the local resident, who lives 35 minutes from the course in nearby Boerne, at a loss for words.

For most of the final round, it was Walker who played the part of the “cool” customer. When Jordan Spieth birdied the opening hole to cut the lead to three, Walker didn’t waver, matching the two-time PGA TOUR winner shot-for-shot for most of the afternoon.

When he found the trees off the tee on No. 4 — a tee shot Walker called his “worst driver of the week” — Walker managed to get up-and-down for bogey to keep a big number off the card.

“I just tried to stay composed and not get ahead of myself,” Walker said. “Out here, no lead is safe and on this golf course a big number is right around the corner if you’re not careful.”

For Walker, the putter and his play on the par 5’s proved to be the difference at TPC San Antonio. He led the field in strokes gained: putting (10.338) and strokes: gained total (20.315) and was a cumulative 12 under on the par 5s.

“I drove it well on the par 5s all week and that helps,” Walker said. “If I set myself up good off the tee, the short game is pretty sharp, so that really helps.”

With the win, Walker became the first player to record multiple victories on TOUR this season, and the fourth area resident to win the Valero Texas Open since David Ogrin (Garden Ridge) in 1996. He also extended his FedExCup lead to nearly 500 points over new No. 2 Jordan Spieth.

Walker came into the week having not played since the World Golf Championships-Cadillac Championship and said the extra time off allowed him to prepare for an important stretch in the season.

“I’ve been working hard,” Walker said. “Being home the last two weeks has helped. I needed a little recharge after playing a pretty busy West Coast schedule. I just needed the rest.”

The rest has certainly paid off. Walker plans to celebrate his win tonight with family and friends before hopping on a plane and heading to Augusta on Monday to play a practice round with Rickie Fowler.

“I’m looking forward to it,” Walker said. “You definitely wouldn’t want to go there not playing well. I’ll get a look at the course and just get ready for an amazing week.”