In the 1920’s, one of the biggest projects of the NY Central of this era was the Castleton Cutoff which would replace the grades and drawbridge at Albany with a high-level river crossing several miles south of Albany. The Castleton Cutoff was not only a bridge (later named the A.H. Smith Memorial Bridge) but included the new yard at Selkirk which eventually replaced West Albany in importance. In 1924, A.H. Smith, the president of the New York Central, predicted a greater Albany. He expected Albany to grow to the Castleton Bridge. The bridge cost $25,000,000 and is 135 feet above the river. It consists of a 600 foot span and a 400 foot span. The bridge contains 23,000 tons of steel and 52,000 yards of concrete. The bridge, and 28 miles of track owned by affiliate Hudson River Connecting Railroad, connected the Boston & Albany, Hudson Division and West Shore (River Division) with the Mohawk Division. The new yard at Selkirk had 250 miles of track connected by 430 switches and served by 2 roundhouses. The opening ceremonies were attended by a large crowd including the Van Sweringen brothers who owned the Nickel Plate, W.H. Truesdale of the Lackawanna. William K. and Harold Vanderbilt, Mayor Hackett of Albany and New York Lt. Governor Lunn. Two bridges then served Albany. One bridge to the passenger station (now a bank computer center) lasted until the late 1960’s. The northern of the two bridges is the present Conrail bridge used mostly by Amtrak. At that time it was considered the “freight” bridge but also was used by those few passenger trains that didn’t stop at Albany (some sections of the 20th Century Limited and a couple of limiteds to the midwest).

Other articles we have  about the Castleton Cutoff

We have other interesting articles about the Hudson River Connecting Railroad , the White Elephant Line , and Railway Express Agency .

We have maps of the Castleton Bridge area and Selkirk Yard . You can fly around the Albany area on Google Earth.

Starting with our Selkirk Photo Gallery , we have lots of interesting pictures. There is a collection of New York Central Railroad pictures , tunnels and bridges on the New York Central , the Hudson Line south of Beacon and a link to Albany County Historical Pictures .

There is a special section on The Hudson River , another on the Port of Albany , one on the Capital District .

, and a story on Transportation in Albany .

Other sections you shouldn’t miss are rumors about Selkirk , railroads East of the Hudson key to Castleton Cutoff , some questions answered , and our reference section . 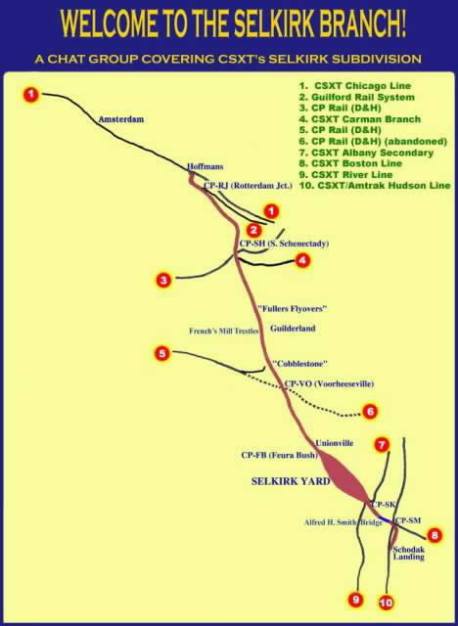