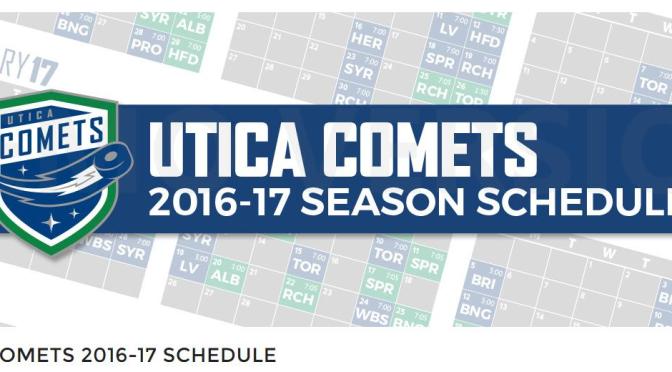 The Utica Comets and the American Hockey League have announced their 2016-17 regular season schedule. The fourth season of Comets hockey will begin with a Saturday-Sunday weekend series in Toronto when they face the Marlies on Oct. 15 at 1p.m., and Oct. 16 at 5p.m.

Printable Schedule| Online Schedule
Opening weekend in Utica will kick-off with a intradivision rivalry showdown when the Binghamton Senators visit The AUD on Wednesday, Oct. 26. It will continue with a Friday night contest against the Providence Bruins on Oct. 28.

The Comets 2016-17 season will see the team play two games in NHL arenas. On Saturday, Nov. 26, the Comets and Marlies will play at the Air Canada Centre, home of the Toronto Maple Leafs. Puck drop is scheduled for 1:30p.m. On Wednesday, Feb. 22, the Amerks and the Comets will square off at the First Niagara Center in Buffalo, NY. Puck drop at the home of the Buffalo Sabres is scheduled for 7:05p.m.

This season the Comets will once again host theme nights such as Pink the Rink, Military Night, and Clinton Comets Appreciation Night. Dates and details for these nights will be announced at a future date.

Utica will once again have a fan-friendly schedule with 26 of their 38 home games occurring on a Friday, Saturday or Sunday. This year’s schedule provides Comets fans with the opportunity to see the other 13 teams in the Eastern Conference play against the Comets this season including the AHL’s newest team, the Springfield Thunderbirds (Florida Panthers), who will make their first visit to The AUD on Friday, Nov. 18. A new rule for this season will provide Comets fans the opportunity to see all three of the Comets sweaters at The AUD. After the league-mandated Christmas break (Dec. 22-25), teams will don their dark sweaters in their home arenas. Prior to the break, teams will wear their traditional white jerseys at home.

The growing rivalry with the Syracuse Crunch will reach a new level this season with 12 meetings between the two clubs. The first game in the Galaxy Cup rivalry will take place in Syracuse on Oct. 22, at 7p.m. The Crunch are scheduled to make their first visit to Utica on Wednesday, Nov. 23. All-time the Comets possess an 11-6-2-1 record against their closest rival, and have captured The Galaxy Cup in all three years.

Struggling with e-mail? Overwhelmed with too many meetings? Late with reports?

We have combed the Internet and found some tools and ideas to help you.

Some of these blogs are eye-openers, like the one about keeping your email box at zero. Plenty of well-worn time-management advice tells us how we should plan our day. Do the most important thing first. Never check email in the morning. Make a to-do list the night before. Don’t schedule meetings right after lunch when everyone will be half-asleep.

Note: sometimes these ideas conflict, so use your own judgement and experiment until you find things that work.

But what if we organized tasks by when research shows it’s actually most optimal to get them done? That’s a question we started asking after coming across a recent study that shows the ideal time of day to make moral or ethical decisions is in the morning. And so, we pored over additional research (some academic, some perhaps less so) on tasks and timing. Below, a research-based weekday planner for what to do — and, perhaps more important, what not to do — at various hours of the day.

6 – 8 a.m. Send email. Many books may have been written advising us never to check email in the mornings. Time management experts say not to get mired in our inboxes first thing, or we won’t get the critical things done. But of course, people do anyway, grabbing their phone off their bedside table, tapping away responses on their morning train, or giving themselves a breather once they sit down at their desks and drink their coffee.

Which is why sending email first thing might actually be the best time to do it. Research by a marketing software company shows that the highest click-through rate from marketing emails is on those sent around 6 a.m. or potentially a bit later.

8 a.m. Make decisions about ethical dilemmas. While the time here is somewhat arbitrary, recent research from professors at Harvard University and the University of Utah found what they called the “morning morality effect” in four experiments of undergraduates and working adults. In computer-based tests, participants were given the opportunity to cheat or lie in order to earn more money — and the experiments found that people were more likely to do both in the afternoon.

9 a.m. Avoid scheduling meetings. The hardest part about scheduling meetings isn’t really finding the time when everyone involved will be bright-eyed rather than half-asleep. It’s finding a time when everyone can actually attend. Keith Harris, chief technology officer of WhenIsGood.net, a bare-bones Web app for picking meeting times without sending a flurry of emails back and forth, dug into his software’s data and examined 2 million responses to some 530,000 scheduled events. He found that first thing in the workday is when the fewest people say they’re available. “Any time before ten, forget it,” Harris wrote in an e-mail. “Your co-workers are still deep in their coffee and inbox.”

1 – 2 p.m. Don’t make cold calls (especially on Friday). One might think lunchtime would be a good opening for a new business lead, when you catch someone at their desk eating a sandwich and checking Facebook or ESPN.com. But research by James Oldroyd, a business school professor in Korea whom CBS Marketwatch called “the mad scientist of cold calling,” finds that the worst time of day to make an unsolicited call is between 1 and 2 p.m. Far better is late afternoon (between 4 and 5 p.m.) or first thing in the morning (8 to 9 a.m.). That morning hour had 164 percent better results than the lunch hour in Oldroyd’s analysis of more than a million cold calls. His findings also reportedly show that Thursday is the best day of the week, while Friday is the worst.

2:30 or 3 p.m. Schedule meetings (if it’s Tuesday!). In addition to helping us find the worst time of day to try to get people around a table, WhenIsGood.net’s Harris also scanned the data to find the best. The winner: Tuesday, at 2:30 p.m., is the day and time of the week when most people accept meeting requests. Harris ran the search for us earlier this week, and it confirmed similar results to when he first ran the numbers for a white paper five years ago and Tuesday at 3 p.m was the best. He speculates Tuesday afternoon stands out “because that is the furthest you can get from the deadlines at the end of the week, without bumping into the missed deadlines from the week before.”

4 p.m. Do tasks that don’t involve sending e-mail. If early morning is the best time to get people to act on an e-mail, late afternoon is the worst. Analysis of millions of messages shows that 4 p.m. has the lowest click-through rate of any time of day, as people hurry to get out of the office and check things off before heading out the door.

4 – 6 p.m. Avoid sitting for an interview. If you catch wind the hiring manager has scheduled to interview several candidates over a single day or two — try not to be the last of the pack. Try and ask for a morning appointment if you can.

6 p.m. – late Do creative work, if you’re a morning person. If it sounds counterintuitive, it is. Yet research actually shows that people do their best creative thinking when they’re tired.

They found that those who identified as feeling fresh and sharp in the morning did better solving problems late at night that required original thinking. For night owls, it was the inverse. Morning proved a better time for them to have bright ideas. Their explanation: Creative thinking requires us to approach problems from a different perspective, which is actually harder to do when we’re clear-headed and can only see the obvious answer. If we need to concentrate, it’s good for our brains to be “on.” But if we need to think differently, it’s easier when our brains are a little distracted

Urban Dictionary defines as: When you have no messages in your email inbox. Such a goal is often elusive, because the more email you clear out and reply to, the more new messages come in. I reached my goal of inbox zero by Friday afternoon, but Monday morning I had 42 new messages.

TechTarget defines as: Inbox Zero is a rigorous approach to email management aimed at keeping the inbox empty — or almost empty — at all times.

Inbox Zero was developed by productivity expert Merlin Mann. According to Mann, the zero is not a reference to the number of messages in an inbox; it is “the amount of time an employee’s brain is in his inbox.” Mann’s point is that time and attention are finite and when an inbox is confused with a “to do” list, productivity suffers.

Mann identifies five possible actions to take for each message: delete, delegate, respond, defer and do.

Here are some of Mann’s tips for effective email management: