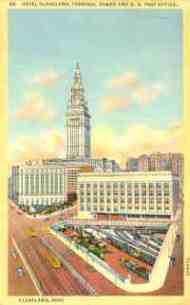 Pictured above is the Cleveland Union Terminal

Early in the 20th Century, two brothers from rural Ohio built a railroad empire when railroads were more critical to American transportation. Their achievements were first real estate, secondly in skyscraper construction, and finally in railroad consolidations. Oris P. and Mantis J. Van Sweringen were bachelors who had no hobby but work.

In 1916, the New York Central sold them the New York, Chicago & St. Louis (commonly known as the Nickel Plate). This road did not do well with passenger traffic but had a rich freight business. They hired John J. Bernet as the president to run it. By 1922 they had absorbed the Lake Erie & Western and the Toledo, St. Louis & Western (Clover Leaf Route).

Next, they gained control of the Chesapeake & Ohio and Hocking Valley (the Hocking Valley gave C&O a long haul route from the Ohio Valley to the Great Lakes). These fed coal tonnage to Nickel Plate which served industrial centers such as Lackawanna, Cleveland, Lorain, Toledo, Gary and Chicago. By 1927, the Van Sweringens had 26% of the Erie, 33% of Pere Marquette and 17% of Wheeling & Lake Erie.

In 1926 the Interstate Commerce Commission did not allow the brothers to merge their holdings. They then shifted their consolidation scheme to C&O to satisfy minority shareowners. This didn’t work either.

The coming of the Great Depression in 1929 nullified whatever unification plans the “Vans” had. They died in 1936 and 1937 after their empire collapsed.
Central to the Van Sweringen empire was the Nickel Plate Railroad. Find out why the Nickel Plate was built.
See a great Nickel Plate map and discover the role of the Nickel Plate in various “Alphabet Routes”. An important Nickel Plate connection was the Buffalo Creek Railroad

Cleveland was important to the Vans. We have some Cleveland railroad maps a story of what’s left of Cleveland Union Terminal. You can also see the New York Central Cleveland Division in 1925 . We talk about Cleveland’s current regional transit system too.

Read about Ohio in 1998 and about Ohio railroad stations. Find out about the Maumee River Bridge and Interstate trails.
Between 1926 and 1930, the system saw development of new high-horsepower locomotives. The most famous of these was the 2-8-4 Berkshire. These were used by Erie and Nickel Plate. Later, T-1 2-10-4’s were developed on the C&O based on the 2-8-4’s.