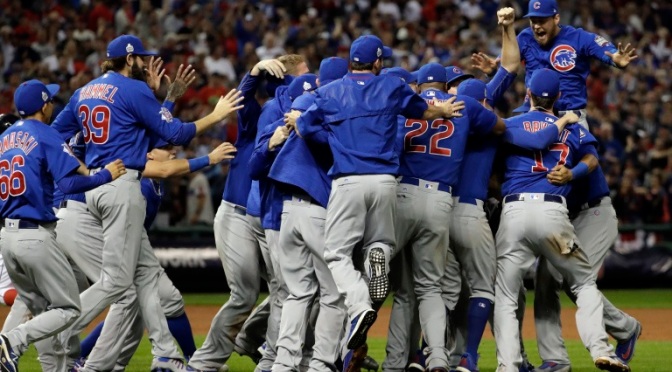 The Chicago Cubs celebrate after Game 7 of the Major League Baseball World Series against the Cleveland Indians Thursday, Nov. 3, 2016, in Cleveland. The Cubs won 8-7 in 10 innings to win the series 4-3.

For a legion of fans who waited a lifetime, fly that W: Your Chicago Cubs are World Series champions.

Ending more than a century of flops, futility and frustration, the Cubs won their first title since 1908, outlasting the Cleveland Indians 8-7 in 10 innings of a Game 7 thriller early Thursday.

They even had to endure an extra-inning rain delay to end the drought.

Cleveland was trying to win its first crown since 1948, but manager Terry Francona’s club lost the last two games at home.

After defeating San Francisco and the Los Angeles Dodgers in the playoffs, Chicago became the first team to earn a title by winning Games 6 and 7 on the road since the 1979 Pittsburgh Pirates.