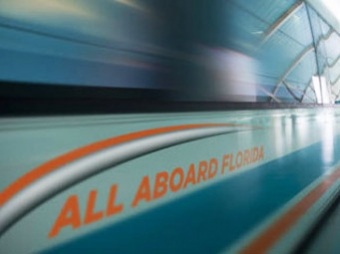 If you follow us, you know we have the most complete news on Florida.

On to California. Their biggest problem has been finding. But now private investors are warming to California high-speed rail. Does this means maybe a 50-mile segment called “The Pepsi Trail”; or maybe naming rights for stations: “next station stop is Goldman Sachs”? The Sacramento Business Journal sees many possibilities. Nine companies, mostly large construction, engineering and infrastructure firms that have worked on high-speed rail elsewhere, have written letters saying they are interested in financing part of what would be the state’s largest-ever infrastructure project. “We would be very interested in participating in the competition for the construction and financing of California high-speed rail projects,” reads part of a letter from AECOM, a major engineering firm. Other companies writing to bullet train planners include Grupo ACS, Sener, Vinci Concessions, Siemens, Railgrup, Sacyr, Acciona Concesiones and Astaldi SpA. 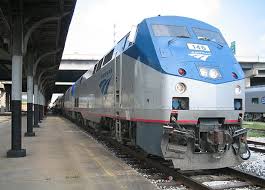 The New York Times has presented a report on the almost $11 billion spent on High Speed Rail by the Obama Administration.

High-speed rail was supposed to be President Obama’s signature transportation project, but despite the administration spending nearly $11 billion since 2009 to develop faster passenger trains, the projects have gone mostly nowhere and the United States still lags far behind Europe and China.

While Republican opposition and community protests have slowed the projects here, transportation policy experts and members of both parties also place blame for the failures on missteps by the Obama administration — which in July asked Congress for nearly $10 billion more for high-speed initiatives.

Instead of putting the $11 billion directly into those projects, critics say, the administration made the mistake of parceling out the money to upgrade existing Amtrak service, which will allow trains to go no faster than 110 miles per hour. None of the money originally went to service in the Northeast Corridor, the most likely place for high-speed rail.

On a 30-mile stretch of railroad between Westerly and Cranston, R.I., Amtrak’s 150-m.p.h. Acela hits its top speed — for five or 10 minutes. On the crowded New York to Washington corridor, the Acela averages only 80 m.p.h., and a plan to bring it up to the speed of Japanese bullet-trains, which can top 220 m.p.h., will take $150 billion and 26 years, if it ever happens.

The federal government is spending hundreds of millions of dollars to bring high speed rail to the Northeast.

Amtrak’s Northeast Corridor, running from Washington, D.C. to Boston, is the crown jewel of the nation’s railroad system.

Trains traveling 160 mph could soon fly across the rails, and New Jersey’s tracks are the key to the whole plan.