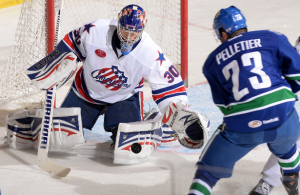 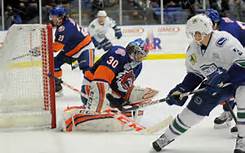 Cal O’Reilly might return to the Utica Comets for the 2014-15 American Hockey League season, but fellow center Pascal Pelletier, the team’s leading scorer, will not.

Pelletier, an AHL veteran who scored 22 goals and had 40 assists in 69 games, has signed to play with Medvascek Zagreb of the Kontinental Hockey League. He was an assistant captain and a mainstay on the Comets’ power play and penalty kill.

O’Reilly, 27, who has played for three different National Hockey League teams, joined the Comets in mid-November after playing in the KHL. He scored seven goals and added 38 assists in 52 games, and was a key member of the power play and penalty kill.

Jeffrey, 26, who has spent time in the NHL with the Pittsburgh Penguins and Dallas Stars, scored four goals and six assists in 21 games with the Stars, playing for new Canucks coach Willie Desjardins, then added seven goals and five assists in 19 playoff games.

Sanguinetti, 26, played 15 games in the KHL last season, scoring two goals and adding five assists. He has played 45 games in the NHL with the New York Rangers, who drafted him 21st overall in 2006, and Carolina Hurricanes.

The Canucks did not announce it, but it is believed defenseman Alex Biega, who scored three goals and had 19 assists in 73 games for the Comets last season, also has signed with the NHL club.

Now for some late-breaking news

The Vancouver Canucks have re-signed goaltender Joe Cannata, who spent last season with the Utica Comets.

Cannata, a 24-year-old native of Wakefield, Massachusetts, was 11-12-1 in 28 games with the Comets. He had a 2.83 goals against average and a .907 save percentage in his third American Hockey League season.

“Zack is a skilled, young player and an important member of this team,” Canucks general manager Jim Benning said in a statement. “He has the ability to impact a game both with his talent and size. We look forward to seeing him continue to develop as a Canuck.”

Weber, who split last season between Vancouver and the Utica Comets of the AHL, had 10 points in 49 games for Vancouver.

The Vancouver Canucks have re-signed defenseman Peter Andersson, who spent last season with the Utica Comets in the American Hockey League.

The 6-foot-3, 194-pound Andersson, 23, scored two goals and had 11 assists in 58 games for the Comets in his second season in the AHL. He had a goal and seven assists in 42 games during the 2012-13 season with the Chicago Wolves, the Canucks’ previous AHL affiliate.

The Canucks previously signed goalie Joe Cannata, defenseman Alex Biega, and center Cal O’Reilly, all of whom played for the Comets last season, along with center Dustin Jeffrey and defenseman Bobby Sanguinetti.

Travis Green could have been working in the National Hockey League next season. Instead, he expects to return to as head coach of the American Hockey League’s Utica Comets.

Green was offered a job as an assistant to Mike Johnston, the new coach of the Pittsburgh Penguins, but turned it down. Green was Johnston’s assistant for five seasons with the Portland Winterhawks of the Western Hockey League. He took over the team for the second half of the 2012-13 season, when Johnston was suspended.

“Mike Johnston is a phenomenal career coach,” Green said, adding that he had learned a great deal from him. “I have goals and aspirations, and they are to be a head coach in the NHL. I felt it was important for me to continue down the path I laid, and I feel I need to be a head coach a longer period of time.”

The former long-time NHL player coached the Comets to a 35-32-5-4 record in their inaugural season in 2013-14. The team just missed the Calder Cup playoffs after a disastrous 0-8-2 start.

Green said being a head coach in the AHL is the best way for him to get to the NHL, at least at the moment.

“It’s not any different than a player,” he said. “You move up and move up and when you’re ready, you’re ready. … I feel the AHL is a great breeding ground for coaches and players. I want to build a program and be part of a program that is going to produce NHL players and produce a championship. I’m looking forward to building on what we started last year.”

Green said he likes what he sees in a revamped Canucks organization led by the new team of President Trevor Linden, General Manager Jim Benning and new head coach Willie Desjardins, who led the Texas Stars to the Calder Cup this past season.

“I’ve been impressed with the commitment they have to developing players and developing winning players,” he said.

“It was kind of expected,” he said. “I understood his decision. Your veterans are so important. But we’re going to have some good veterans again, and your younger veterans have to take the next step and be better than they were a year ago.”

Find out about Project and Fairpromise

Pascal Pelletier scored a power play goal with assists from Henrik Tommernes and Cal O’Reilly just 24 seconds into overtime, and the Comets defeated the Lake Erie Monsters 3-2 Thursday in Cleveland.

The Comets have 73 points with five games to play in a desperate six-team battle for the last American Hockey League Western Conference playoff spot, currently held by the Charlotte Checkers with 77 points.

It was sixth 3-2 decision in seven games between the teams, with the Comets winning four times. Utica has a 4-3 edge overall in the series, with concludes with another game at 7:30 p.m. tonight at Quicken Loans Arena in Cleveland.

Pelletier, Utica’s scoring leader (19-40 – 59), connected from his favorite spot in the right faceoff circle as the Comets skated 4-on-3. They got the extra man when Lake Erie’s David van der Gulik was called for tripping as the final horn sounded in regulation. The Monsters had tied the game on Michael Schumacher’s goal at 15:42 of the third.

Brett Clark scored early in the second period to give Lake Erie the first lead, Brandon DeFazio tied it with his 17th goal at 14:17 with help from O’Reilly and Patrick Kennedy, and the Comets took the lead on Jeremy Welsh’s goal at 13:38 of the third. Kellan Lain and Alex Friesen assisted on that one.

Schumacher scored on the power play shortly after that, and then the teams headed to the overtime.

Joacim Eriksson made 19 saves for the Comets. Sami Aittokallio made 29 stops for Lake Erie.

After tonight’s (Friday’s) game, the Comets get a night off before traveling to play the Phantoms in Glens Falls at 5 p.m. Sunday, then return to the Utica Memorial Auditorium for games with Rochester Wednesday, Toronto Friday and Wilkes-Barre/Scranton Saturday to finish the regular season.

Read more about the Comets victory.

They played against each other in their National Hockey League days, although the Utica Comets president and former goalie can’t recall if Linden, who collected 375 goals in a 22-year career, ever put the puck past him.

Esche also is sure Linden’s appointment as president of the Vancouver Canucks Wednesday morning is a good thing for the Comets, Vancouver’s American Hockey League affiliate. Linden, among British Columbia’s most popular athletes, past or present, was named to the position a day after the Canucks fired general manager Mike Gillis. Vancouver, coached by John Tortorella – briefly a member of the Mohawk Valley Stars during training camp in 1983 – bowed out of playoff contention earlier in the week.

“It’s an exciting time to be in the Vancouver organization,” Esche said. “It’s been terrific working with them all season long.”

Centers Pascal Pelletier and Cal O’Reilly scored Sunday’s goals for the Comets, who were trying to rebound from Saturday’s devastating, 6-5 overtime loss in Syracuse. Utica lost a 5-2 lead in the final 1:39 of regulation – the Crunch scored three goals with their goalie pulled in a span of 46 seconds.

On Sunday, the Comets fell behind when Toronto’s Sam Carrick scored on a rebound just 3:06 into the game and moments later, teammate Kenny Ryan converted a Utica turnover into a 2-0 lead for the Marlies.

Pelletier scored his 18th goal – his team-leading eighth power-play score – and cut Toronto’s lead in half with 3:01 left in the second period. Brandon DeFazio had one of the assists, raising the winger’s season total to a career-high 15.

But early in the third period, a double-minor on Utica’s Alexandre Grenier led to a power-play goal by Carrick and a 3-1 Marlies lead.

The Comets failed to score on back-to-back power plays of their own before pulling goalie Joe Cannata in the final minute and getting a goal from O’Reilly with 43.5 seconds remaining.

Utica slipped to 31-30-5-4 and remains on the outside looking in in the Calder Cup playoff race. The Comets have six regular-season games remaining. They travel to Cleveland to play two games against the Lake Erie Monsters on Thursday and Friday night.

Read more about the Comets. 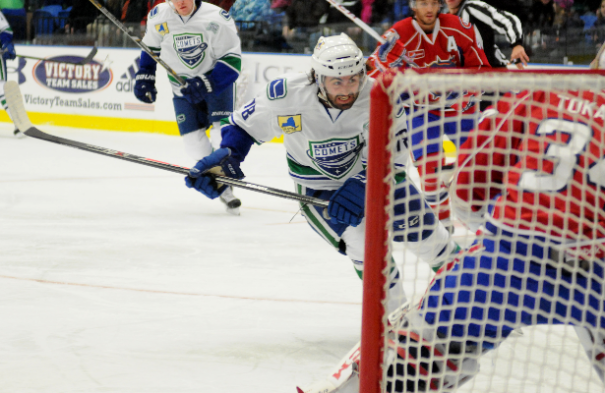 Benn Ferriero scored a power play goal early in the third period, Cal O’Reilly had two assists, and Joacim Eriksson made 29 saves to lead the Utica Comets to a 2-1 American Hockey League victory over the Bridgeport Sound Tigers on Sunday in Connecticut.