Always a lot of controversary about NY Central and Pennsysvania joining up as Penn Central. What if there had been no Penn Central?
Yes, my NYC bias shows in what I write. Here is a different opinion.
Interesting would be if the PRR had made the decision to stick with their own system verses merging with the NYC. The PRR had a strategic system prior to the merger that if properly managed would have been able to make it to deregulation using dividends from its stock in the N&W and Buckeye Pipeline. James Symes should have gone to the N&W and recruited John Fishwick to run the PRR instead of Stuart Saunders to lead the PRR. Fishwick would have avoided building Buckeye Yard in Columbus, instead focusing finances to modernize the three major segments of system with track improvements and CTC: NYC to Pittsburgh; Pittsburgh to St. Louis; Pittsburgh to Chicago, and to purchase the Reading Railroad for a direct connection from its own system in Harrisburg to the Lehigh Valley. The Reading purchase would have allowed the PRR to sell all of the electrified segments of the system to include the Northeast Corridor from Washington to New York and the Philadelphia to Harrisburg line to the U.S. Government, ridding the PRR of the large expense of running expensive passenger trains on those lines, retaining freight rights, and concentrate on running the freight portion of the railroad. For traffic bound for Potomac Yard and points south, sister railroad N&W could have worked out a haulage agreement with the PRR to move their cars via the Hagerstown gateway and Front Royal for access to both the Southern Railway and the RF&P and New England bound freight could have been interchanged with the N&W subsidiary Delaware & Hudson. By 1980 the PRR and the N&W could have worked on a merger of their own similar to the merger that the C&O and the B&O put together saving the northeastern rail system from the bankruptcy of the Penn Central.
That is true. Could Pearl man have rolled the dice with saying that he could make better returns by staying independent? The MTA took the LIRR out of Penney’s hands by then. Could he have cried for a similar remedy for the Harlem, and southern Hudson Div.?

The fact still remains that there were so many choices in the NYC-Buffalo corridor, and a cutting was necessary. What if he did something like what was done by C&NW, and buy a parallel line, then kill it? Northwestern was no money machine either. The Chicago-Omaha, Chi-Twin, St. Louis, and KC corridors were just as over saturated.

I’m just looking at possible ways that Pearlman could have held things together long enough, and make enough improvements to become an attractive bride. 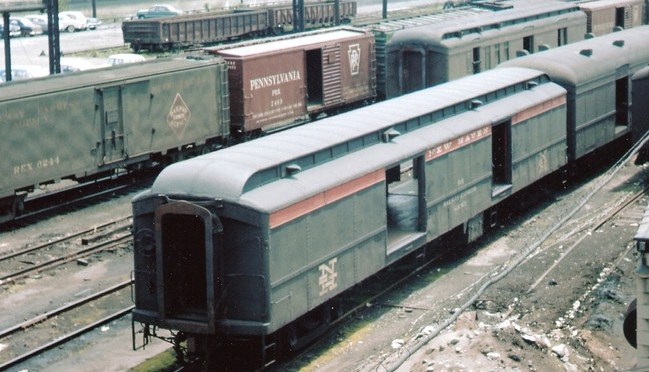 Our picture at the top which we bought from noted photographer Charlie Gunn, shows head end cars at New Haven, Connecticut. Now we have some cool notes from The New Haven Railroad Forum.

Like the REA express contracts the USPS had its own rules regarding the transportation of Sealed Cars of bulk mail. On a regular daily basis NH cars ranged far and wide to Dallas Tx. St. Louis Mo. and all points in between. What was available was used. The cars were designated as sealed Pouch cars.

To elaborate a little more, if the USPO in Boston or Providence or New Haven had enough bagged mail for Las Cruces, New Mexico and a New Haven car was available, then that’s what took the trip to the Land of Enchantment.  Specific routing?  That, if it existed, was determined by the USPO, not the railroad.

As for transferring en route, I suppose a sealed car to Omaha, Nebraska partially offloaded there could have its load then transferred to another partially-full car.  Again, that was a USPO determination.  Sealed cars stayed sealed to their destination.  Partially-loaded cars might continue onward until emptied or filled along the way.  As confusing as the mail and express moved over the nation’s railroad, before the age of computerized routing, it worked.

One of the major factors in the wholesale train-off petitions of the ‘60s was the Post Office’s cancellation of all rail contracts for the movement of mail in favor of air and trucks. With the lose of that head end revenue, formerly profitable, or at least break even runs became back breakers for the railroads. There were several proposals to save the national passenger system after that including returning mail to the rails. Amtrak was the worst of the lot, so of course that was the one Nixon chose.