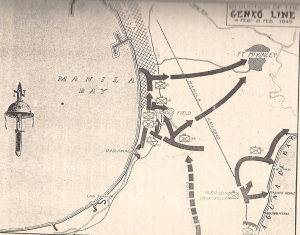 By the beginning of February, 1945, the US Navy reported: since 19 June 1944, the Japanese have been losing 50 shipping vessels per week. The US B-29’s, after bombing Singapore harbour, demolished the enemy shipping vessels there. The US Air Force had begun to bomb Japan’s homeland as well. Japan felt that if they beef-up their forces in the Philippines and were to drive the Allies off the islands, the United States would be forced to ease up on their bombardments. Enemy replacements and war materiel began to pour onto Luzon.

3 February, 1945 is considered the starting date for the battlefor Manila. The Japanese are actually trapped in the city between the 11th Airborne Division moving up from the south and XIV Corps from the north. This battle will go on all through the month with some of the most ferocious fighting of the war.