TARRYTOWN, N.Y. (CBSNewYork) — Traffic is starting to move again after a chain reaction crash on the Gov. Mario M. Cuomo Bridge closed the span in both directions, leaving drivers stranded for hours.

Two northbound lanes and two southbound lanes on the bridge are now open, but drivers should still expect delays and are being urged to seek alternate routes.

What are alternate routes?????

Lets consider the HYPERLOOP between Stewart International Airport (and beyond)

Perhaps we should also be considering extending the proposed HYPERLOOP from NY City to Stewart Airport to Bradley (and maybe Albany, Capital of New York State and even more)

The snow has canceled or delayed some flights at Bradley International Airport Wednesday morning.

The airport says that while they are open, some airlines have already started to adjust their schedules. As of Wednesday morning, 30% of arriving and departing flights have been cancelled. There are also a number of delays.

Perhaps we should also be considering extending the proposed HYPERLOOP from NY City to Stewart Airport to Bradley (and maybe Albany, Capital of New York State and even more)

Hey, Sheiks and Shebas!  It’s pos-i-lutelydarb to see you at Jazz Age Wednesdays.  I have something to share.  When handsome, humorous, honorable, most huggable Hugh Roberts, of Hugh’s Views & News, asked me to participate in his new feature series, all I could say was, “And how!”

Here’s Hugh’s description of this feature: In this feature, I will be sharing snippets from my diary of 1988. We’ll also take a trip in Hugh’s Music Time machine to hear some songs from the 1980s which have been chosen by some specially invited guests. (Click here for that post.)

Writing a story is not as easy as you might think.  Plus, I never can make things simple for myself… For Hugh’s feature and my favorite 80s song I wanted to pick something to which I could relate a new story from the…

YES! With that attitude, he is great. 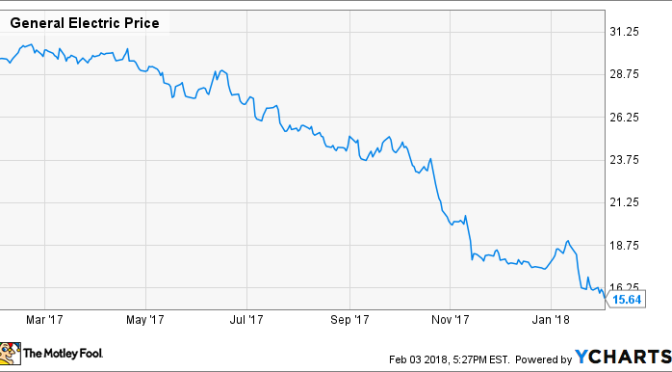 Storied U.S. industrial giant General Electric (NYSE: GE) has had a rough time over the past year. Earnings expectations have plunged, driven primarily by a big downturn in the company’s power business. Last month, GE announced a massive charge related to its legacy insurance operations. This sparked fears about what other problems may still be lurking beneath the surface.

In response, its new management team plans to simplify the company, but many investors are worried that it won’t be enough. As a result, GE stock has lost about half of its value over the past year.

GE’s moribund stock performance could cause the company to lose its place in the Dow Jones Industrial Average. Tim Mullaney of MarketWatch recently suggested that Amazon.com (NASDAQ: AMZN) should replace it. Amazon is extremely unlikely to join the Dow, though. Among today’s fast-rising companies, Facebook (NASDAQ: FB) is the most likely Dow candidate.

The stock price is the problem
General Electric is the only one of the 12 original Dow components that is still part of the index. Thus, dropping GE from the Dow would be a momentous decision. However, the index committee may not have much choice anymore.

The problem is not that General Electric has suddenly become irrelevant. Analysts expect it to produce more than $120 billion of revenue this year. Even if the company slims down by selling or spinning off its interests in oil and gas, transportation, and lighting, it will still have about $100 billion of annual revenue. That puts it in the upper echelon, even within the Dow index. Among General Electric’s main business segments, only GE Power is shrinking.

Instead, GE is likely to get booted from the Dow because of its low stock price. The Dow Jones Industrial Average is a price-weighted index, which means that low-priced stocks like GE — which ended last week at $15.64 — have a very low weight in the index. (By contrast, Boeing is the highest-priced Dow component, with a stock price of $348.91 as of Friday’s close.)

GE is likely to be replaced in the Dow by a higher-flying stock. Image source: Boeing.

Right now, General Electric stock makes up just 0.4% of the Dow index, compared to 9.4% for Boeing. In short, it has become virtually irrelevant to the index’s performance — as seen from the fact that the Dow has soared over the past year despite GE’s woes. In the past, this has been sufficient cause for removing stocks from the Dow index.

Amazon.com stock is too pricey for the Dow
In terms of fundamentals, adding Amazon to the Dow would make a lot of sense. As Mullaney notes, it’s a massive, fast-growing company that is quickly diversifying beyond its retail roots.

However, its sky-high stock price means that it won’t be considered for inclusion in the Dow. Based on its Friday closing price of $1429.95, Amazon stock would make up nearly 28% of the index, completely dominating its performance.

Mullaney does recognize this obstacle, and suggests that Amazon could split its stock to put the stock price back in range for Dow inclusion. However, Amazon’s last stock split was in 1999. It seems like management has made a philosophical decision to avoid the financial engineering of stock splits and let the stock price go where it will.

Facebook could be the best alternative
CVS Health was Mullaney’s “backup” choice for inclusion in the Dow. It’s already No. 7 on the Fortune 500 list of the largest companies by revenue, and will move up further if its proposed acquisition of Aetna is approved. As one of the leading healthcare companies in the U.S., it is likely to join the Dow index sooner or later.

However, if the selection committee wants to add one of the most prominent high-growth companies to the index, Facebook is the obvious choice.

St. Louis, MO (STL.News) Missouri may soon be one of eleven U.S. states to see the installation of the Hyperloop One, the newest high-tech and high-speed transportation system.

The transportation system, first proposed by Tesla founder, Elon Musk, is the first of it’s kind. Now, founder of the Virgin empire, Richard Branson, is proposing the Hyperloop One. According to the official website, Hyperloops One’s mission is to “reinvent transportation to eliminate the barriers of time and distance and unlock vast economic opportunities [and]… to have operational systems by 2021 that validate our ability to design, finance and build a safe, revolutionary transportation technology that scales”.

Hyperloop One is a modern mode of transportation that will move individuals quickly and safely from their origin to their destination. Hyperloop One states, “ Passengers or cargo are loaded into the Hyperloop vehicle and accelerate gradually via electric propulsion through a low-pressure tube. The vehicle floats above the track using magnetic levitation and glides at airline speeds for long distances due to ultra-low aerodynamic drag. Hyperloop One systems will be built on columns or tunneled below ground to avoid dangerous grade crossings and wildlife. It’s fully autonomous and enclosed, eliminating pilot error and weather hazards. It’s safe and clean, with no direct carbon emissions”. It is estimated that the top speed of the Hyperloop can reach up to 700 mph.

What does this mean for Missouri? The proposed Hyperloop will serve roughly 5 million people and connect the states three major cities, St. Louis, Columbia, and Kansas City. The transportation system would follow I-70 and cut down travel time drastically. For reference, it takes approximately four hours to get from St. Louis to Kansas City. With the Hyperloop, individuals could travel 3-4 times faster between the three cities, in just under a half an hour.

Although Missouri’s terrain is not perfectly flat, the land still serves as a great landscape for the transportation system, as there are no high-speed competing systems.

Despite the Hyperloop One being in just the beginning stages of discussion, the agreement to look into the potential cost and societal impact is the first step to a faster future for transportation in Missouri.

I hope Musk and Branson are soon announcing a Hyperloop connecting Stewart International Airport with downtown New York City. Only 66 miles! But when the three other NY Airports close like might happen today with snow storm, passengers must take a THREE HOUR bus ride to City. Any questions on Stewart Hyperloop, Contact Ken KinlockKen Kinlock