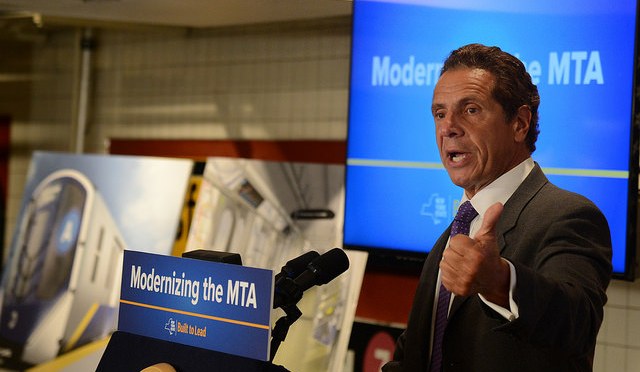 In June, as New Yorkers became increasingly frustrated with subway performance and braced themselves for the expected “summer of hell,” Governor Andrew Cuomo was the focus of intense criticism, responding with a series of measures he said were needed in order to fix the ailing Metropolitan Transit Authority (MTA).

Among them, Cuomo introduced last-minute legislation that would allow the governor to appoint a majority of MTA board members, a gesture some saw as an attempt to bolster his sometimes claim that he does not actually control the MTA and its beleaguered subway system. Currently the governor appoints a plurality of board members as well as the chair and CEO of the MTA, giving the state’s chief executive de facto control of the board.

Cuomo’s bill, announced June 20, the final day of the session — giving it minimal chance to be passed through the Legislature this year — adds two state seats to the MTA board appointed by the governor and an additional vote for the chair. The proposal drew swift criticism from board members not appointed by the governor, who believe the body’s independence is hampered enough, and transit experts, who see it as a cynical ploy.

The measure was not included in the final legislative deal of the session and the governor has been silent on the subject since, though his nomination of Joe Lhota to once again lead the MTA was accepted and the governor appeared to retake responsibility for the future of the subway system.

Cuomo’s board reform proposal came amid a debate between the governor and New York City Mayor Bill de Blasio, both Democrats, over control of the state authority. The governor, while appointing the leadership and six members, has argued that the board’s organizational structure — which allows city and downstate suburban appointees to total a slight majority of votes over budgetary and contracting decisions — is flawed and has historically led to finger-pointing and dysfunction.

“Who’s in charge? Who knows! Maybe the county executive, maybe the president, maybe the governor, maybe the mayor,” the governor said, during a press appearance where he defended the bill.

When asked whether the governor still stood by the proposal and whether he would promote it as part of his 2018 agenda — his State of the State speech and policy platform release will occur January 3 — a spokesperson for Cuomo’s office said that the governor’s view on the issue had not changed but that the governor’s agenda was not yet finalized.

“The MTA’s board structure was purposefully created to avoid accountability, which is why in June Governor Cuomo advanced legislation to update it. Unfortunately, the Legislature failed to adopt the bill,” said spokesman Peter Ajemian.“That design flaw still exists today with the city’s refusal to pay for the system without recourse, and the MTA’s inability to implement its full Subway Action Plan.”

Ajemian emphasized that Cuomo’s administration has appointed a new leadership team is still making significant gains with the half of the plan that is funded by the state.

While the MTA board approves the budget and the chair and CEO run the authority, there is no credible argument that the governor does not effectively control the subway. Critics, including de Blasio, quickly pointed to the governor’s attention to and oversight of the completion of phase one of the Second Avenue subway extension as evidence of Cuomo’s control of the MTA.

“The governor controls the MTA. That’s a hard, accepted fact in the eyes of New Yorkers, said mayoral spokesperson Austin Finan, in a statement to Gotham Gazette. “What’s needed now is a new, dedicated revenue stream to modernize the subways and buses that city riders depend on.”

The current board structure dates back to 1965, though in 1983 Cuomo’s father, former Governor Mario Cuomo, similarly attempted to add members to the board to gain a majority, The New York Times has pointed out. The elder Cuomo gave up due to opposition from then-New York City Mayor Ed Koch and suburban officials.

After the board convened and objected to the legislation, Cuomo appointed Joe Lhota, who briefly ran the authority before leaving for a 2013 mayoral run, as its chair — a move that was hailed by transit experts as a step in the right direction in terms of taking responsibility for the transportation system and its ongoing woes.

hRegardless of whether the governor decides to move forward with controversial MTA board restructuring, he and his chair seized a collective unilateral control over much of the authority’s actions.

Days after appointing Lhota, Cuomo declared a state of emergency at the MTA, ordering Lhota to assess the transit authority’s needs within 60 days. The administration has extended the order every 30 days, granting Lhota the authority to execute many contracts without a board vote.

“State of Emergency declarations must be renewed every 30 days, and as such, the Governor has renewed MTA’s order every 30 days so the MTA can continue to work swiftly and without constraint,” said Ajemian in statement, when asked when the order would be allowed to expire.

While MTA board members interviewed by Gotham Gazette declined to comment on the record about Cuomo’s restructuring bill, those from New York City have made clear that the governor already calls the shots at the agency. At least one gubernatorial appointee, Scott Rechler, sided with Cuomo on the legislation, when speaking to the New York Times in June.

“Let him put 100 percent of his political capital, his expertise, his energy, his relationships into fixing something that is immensely broken,” he told the outlet.

The general consensus is that the governor already has more than enough power over the MTA.

To restructure the MTA board, Cuomo would need the support of Legislature, which is led by an Assembly member from New York City and a Senator from Long Island.

A spokesperson for Assembly Speaker Carl Heastie said no legislation had been proposed in the Assembly, so the speaker could not comment. A bill was hastily introduced and sent to the Senate’s rules committee on the last day of this year’s legislative session, and a spokesperson for Senate Majority Leader John Flanagan did not return a request for comment.

One thought on “Ahead of 2018 Session, Cuomo Mum on Pursuing MTA Board Overhaul”