By now has bitten the dust…

It would make it up most hills–just!

Its original line to Springfield

Gave up the ghost years ago…

The company only got bigger

Dropping off a car on a spur…

Real nice to have favored memories

Through photos peering through history’s blur! 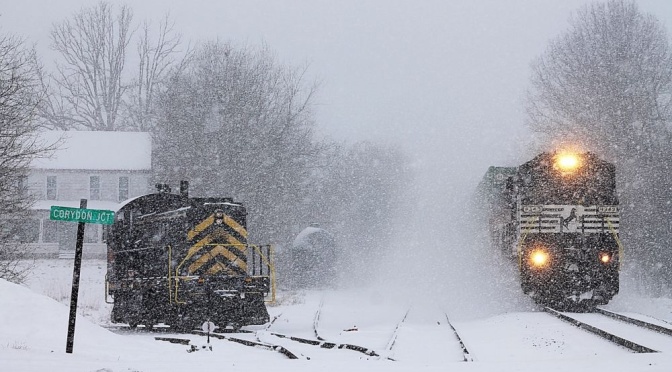 A big railroad and a small,

For the bigger road’s freights,

Ready to run with it all!

Google is about to launch a small but useful update to Google Maps that will give you live guidance and interactive real-time notifications during your journey.

The idea here is to give you real-time updates while you are on your transit journey. These updates will appear in the Google Maps app and, maybe most importantly, on your Android lock screen.

To get started, you search for your transit directions in Google Maps as usual. So far, so good. What’s new here is that you’ll soon be able to tap a “start” button at the bottom the screen with the details about your transit journey and then get live updates as you walk or ride on your local buses and trains.

Fire officials in Union Township, southwest of Newark, said the roughly 140-car train operated by CSX Transportation derailed about 1:30 p.m. on its way to Selkirk, New York, a suburb of Albany.

Fire Chief Michael Scanio said the tracks suffered “severe damage” but that the train cars were empty according to the engineer’s manifest, and there were no injuries.

Overhead images showed at least a dozen rail cars off the tracks or lying on their sides.

People were evacuated from nearby homes and businesses, Scanio said, but were being allowed to return to their homes by late afternoon after hazmat teams cleared the accident scene.

The tracks affected by the derailment are owned by Conrail and are also used by commuter railroad New Jersey Transit, which suspended service on its Raritan Valley Line in both directions in the area of the derailment.

There was no immediate indication about what caused the derailment or how long it would take to restore rail service in the area.

Eureka! I’ve finally discovered the secret to blogging success! The good news is that I can’t wait to share the magic potion with all of you! Whoot!

What is ‘blogging success’ at the outset? Is it something achievable? Is it quantifiable? For me, a successful blog is one that is loved by all. A blog that is pampered in its niche attracts thousands of visitors, garners hundreds of likes and is home to a never-ending string of comments. A successful blog stands out from the rest because, well, it is amazeballs. But what does it take for an amateur to get there? Did it cross your mind at some point in time that those established bloggers were starters, like you? Yeah? Good!

Passion is the key to unlock the door to blogging success. When you blog, you have to do it out of love…