The Maybrook Line was a line of the New York, New Haven and Hartford Railroad which connected with its Waterbury Branch in Derby, Connecticut, and its Maybrook Yard in Maybrook, New York, where it interchanged with other carriers. It was the main east-west freight route of the New Haven until its merger with the Penn Central in 1969.

After the New York and New England Railroad succeeded merging with the Newburgh, Dutchess and Connecticut Railroad at Hopewell Junction en route to the Fishkill Ferry station, they sought to expand traffic onto the newly built Poughkeepsie Railroad Bridge in order to move goods to the other side of the Hudson River, and the Central New England Railway was perfectly willing to provide a connection. The CNE line was originally chartered as the Dutchess County Railroad in 1889 and ran southeast from the bridge to Hopewell Junction, and was operational on May 8, 1892. The line was absorbed by the CNE in 1907, and eventually merged into the New Haven Railroad in 1927. Passenger service was phased out beginning in the 1930s, the same decade the New Haven Railroad faced crippling bankruptcy. Later financial troubles in the 1950s and 1960s led to its eventual acquisition by Penn Central Railroad in 1969.

Upon taking ownership, the Penn Central began discouraging connecting traffic on the line that paralleled Penn Central routes for the rest of its journey to prevent it from being short-hauled. After 1971 only one train in each direction (for the Erie Lackawanna) traversed the full line.

Through service over the line ended abruptly in 1974 when the Poughkeepsie Bridge burned and was not repaired.

Maybrook Yard was where freight cars were interchanged between railroads from the west and the New Haven, whose Maybrook Line headed east over the Poughkeepsie Bridge to the railroad’s main freight yard, Cedar Hill Yard in New Haven, Connecticut.

To handle the traffic the yard was dramatically expanded in 1912 to three miles in length with six separate yards including two hump yards. A new 10-stall roundhouse with a 95-foot turntable replaced the original and was later expanded to 27 stalls. Also added was a large icing plant for refrigerator cars. At its height, the yard had 177 tracks totaling over 71 track-miles.

For much of its existence six class I railroads interchanged traffic at the yard with the New Haven Railroad. In 1956 the yard saw 19 arrivals and 18 departures of which 14 were operated by the New Haven, eight by the Lehigh and Hudson River Railway, seven by the Erie Railroad, four by the New York, Ontario and Western Railway, two by the Lehigh and New England Railroad and two by the New York Central Railroad. Rail service is still provided to customers in Maybrook by the Middletown and New Jersey Railroad on tracks owned by Norfolk Southern.

In 1993, Conrail pulled out of the Danbury area, selling all the track to Maybrook Properties. Freight traffic was rerouted on the Albany-Boston Line, turning south at Springfield, Mass., to New Haven, ending significant freight traffic on the Beacon-to-Danbury Line.

All evidence of Maybrook yard is now gone but for a single track coming from Campbell Hall.

The trains would uncouple their cars in the receiving yard, be classified by destination and recoupled into trains heading into New England. 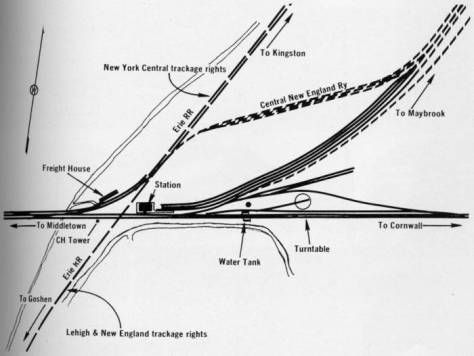