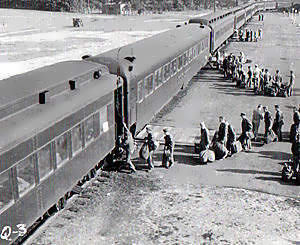 In Weymouth along the Greenbush there was the Naval Ammunition Depot, its annex in Hingham, and the Bethlehem Steel shipyard in Hingham. The Bethlehem Steel shipyard in Quincy. In Hull there was Ft. Revere and supposedly some 16″ guns brought into Hull via rail during WW2. In South Weymouth the Plymouth line’s tracks pass right by the rear gate of NAS South Weymouth. Of course Camp Edwards on the Cape interacted with the NH. I’m curious about all aspects of the NH’s interaction with all military sites in its service area, small installations or large: NAS Cherry Point, RI, Westover AFB in Springfield, National Guard units, Groton, Submarine base, CT, Boston Navy Yard?

The New Haven had a switching yard (totalling about ten miles of track) at Camp Myles Standish. The New Haven was responsible for troop train movements and freight/supply for the camp. None of the yard remains as of today, although the ROW from Taunton to Mansfield can still be explored (one cannot get across Rte 495, however). Camp Miles Standish was a major staging area for the Boston Port of Embarkation in Boston Harbor. Camp Miles Standish was just one of many Army bases located in the Boston area. A Port of Embarkation was a place where troops were actually put on board troop ships and sent off to the war zones. On the New Haven side, the actual Port of Embarkation was the Boston Army Base on the South Boston waterfront. This was served by “Government Yard” which was adjacent to Commonwealth Pier and the Boston Fish Pier. Boston Navy Yard (Charlestown) was on the B&M side of the river. The NH did serve the Military RR in the Quonset point Fleet docks,and the Davisville RI. complex where the Groundpounders were.

There is substantially more to see, from a railroad perspective, at the old Hingham Ammunition Depot annex in Hingham, MA. Known as Wampatuck State Park today, the tracks leading into the Hingham Ammunition Depot annex were refurbished sometime during the 1960s in anticipation of processing rail shipment during the Vietnam War, which apparently never happened. The tracks leading into this facility cross Route 3A near the Hingham/Scituate line and if you walk about a mile into the woods along the tracks you’ll find plenty of tracks and plenty of structures from WW2.

Most of this discussion so far has involved WW II.There are two other aspects — first the NH sponsorship of two military railway reserve outfits, the 729th Railway Operating Battalion and the 749th Railway Operating Battalion in WW II. The 729th served in Europe. The 749th served in the Philippines. The 729th was reorganized, again with NH sponsorship postwar, and served in the Korean War. The 729th was the predecessor unit of the present 1205th railway unit of the Army Reserve.

From: The New Haven and the Military

One thought on “The New Haven and the Military”