GE’s corporate jet fleet includes the Bombardier Challenger 605. Above, that model is displayed at an airshow in 2014. Photo: Krasilnikov Stanislav/Zuma Press

General Electric Co. GE +0.57% executives will have to find new ways to fly around the globe.

The conglomerate is grounding its corporate fleet of jets and preparing to sell them, as new GE chief John Flannery continues to look to slash costs at the industrial giant.

Mr. Flannery is cutting spending in GE corporate operations, including unwinding the internal airline for corporate executives, effective Wednesday, according to a person familiar with the situation. GE will still operate some helicopters and other aircraft, while using charter services as needed.

GE owns several business jets, federal records show, including at least two Bombardier Challenger aircraft. Its pilots for decades have shuttled executives to business meetings and operations around the globe, racking up hundreds of hours a year.

The company has required its chief executive to use private aircraft for all travel, including personal travel, for safety and security purposes, but the board recently changed that policy to allow for charter and commercial flights. With profits under pressure and sales pinched by weakness in parts of the company, Mr. Flannery is looking for ways to save.

”As we have said, we are executing on a plan to take out $2 billion in cost by the end of 2018,” a GE spokeswoman said. “As part of that effort, starting today, we are reducing the Corporate Air Transport services and will use charter companies as needed.”

GE disclosed that it spent $258,000 on personal jet travel for former CEO Jeff Immelt in 2016, counting only the “incremental” costs of the flights such as fuel and crew travel expenses. The company spent another $75,000 on personal travel for other top executives, it said.

The move marks a change from recent plans. When it relocated from Fairfield, Conn., to Boston, the company negotiated with city and state officials to secure parking at Logan International Airport for one executive jet and one helicopter, according to the agreement. The company also requested hangar space at nearby Hanscom Field that could fit six business jets, the documents show.

Mr. Flannery is trimming staff at the corporate level and recently delayed part of the construction of GE’s new headquarters complex in Boston, a relocation initiated by Mr. Immelt.

Mr. Immelt, who stepped aside on Aug. 1, pledged to boost cost-cutting earlier this year after talks with activist investor Trian Fund Management LP, which has been frustrated by missed profit goals at GE.

GE doesn’t just own business jets; it also supplies engines and other parts used on some business jets. The company also makes jet engines for commercial planes, and its GE Capital division has a large business of leasing aircraft, though it sold the unit that rents corporate jets in 2015.

In July, GE told investors they would have to wait until November to hear the new boss’s strategy for boosting results, but investors haven’t been waiting in selling their shares. The stock is down 23% this year amid a surging broader market and has lost 15% in the last three months alone.

Mr. Flannery, who formerly ran GE’s health-care unit, is meeting with small groups of investors and visiting the business units of the roughly 300,000-person company. He has said he would look at every aspect of the company and its strategy, although he won’t consider reducing its dividend.

Most of Amtrak’s passenger cars are over 30 years old. The original
Amfleet cars were built and in service 42 years ago by the mid 1970’s.
The original Superliner equipment was ordered at about the same time
as the Amfleet cars, but because of production delays wasn’t generally
in service until 1980. There were additional Amfleet cars built in the
early 1980’s and Horizon cars built in the late 1980’s. The last 184
Superliner cars were built roughly 25 years ago in the early 90’s and
50 Viewliner sleepers were built around 1995. The newest Amtrak
equipment is almost 20 years old now with the Pacific Surfliners
trainsets from 2000. Amtrak is now getting ready to replace its Acela
trainsets which went into service in late 2000 by 2021 with 28 new
high speed rail trainsets

As part of an economic stimulus program in the late…

The World Socialist Web Site is asking the same question I’ve been thinking about: why weren’t trains used to evacuate people from the path of hurricanes Irma and Harvey? The highways were really the only way out of Houston and South Florida, and highways are notoriously inefficient for moving large numbers of people. And that presumes access to a car, which a lot of people don’t have:

For millions, their only way to flee is by car. Gas shortages have spread across the state, and drivers confront extremely heavy traffic that burns through gas with little progress. From southern Florida, there is only Interstate 95 or Interstate 75 to head north, both of which have had extensive delays for days. On Friday, northbound delays covering hundreds of miles were visible on I-75 and I-95 even into Georgia and South Carolina.

This “fend for yourself” method of evacuation presents an enormous…

Sept. 12–Amtrak CEO Tony Coscia on Tuesday described last week’s joint meeting with the Trump administration on the Gateway Program as “very productive,” but warned that costs to build new rail tunnels under the Hudson River would balloon if funding isn’t secured soon…
The $24 billion Gateway Program would dig a new rail tunnel under the Hudson River, expand Penn Station and build new bridges to better connect Newark, New Jersey, and New York City. While replacing debilitated infrastructure, the program would also improve capacity for the growing number of people making the cross-Hudson commute. Those commuters will be on New Jersey Transit, not Amtrak.

For starters, Antony Coscia is not a CEO of Amtrak, he is Chairman of the Amtrak Board of Directors. Before that he was Chairman of the Board of the Port Authority of New York and New Jersey. The Port Authority is responsible for building and maintaining most of the transportation infrastructure in the New York City Metro area. It is also a major player in the Gateway Project.

What else could be built for $24 billion dollars? That’s roughly the cost in California for about 300 miles of High Speed Rail between Bakersfield and San Francisco. So far the Federal Government has given $3.2 billion for California High Speed Rail and there are few expectations it will approve any more. How much money will the Gateway Project cost US Taxpayer? The Port Authority is self funded, it makes money on bridge tolls and as a landlord: it owned the original World Trade Center and now its replacement as well as other commercial buildings. It has the power to raise bonds for construction projects to be serviced from the Authority’s income. However many of its properties such as LaGuadia airport and the Port Authority Bus Terminal among other have been allowed to become rundown. Many people would like to know where the Port Authority’s money is going too. The Port Authority is often called the private piggy bank of the Governors of New York and New Jersey since there is no legislative oversight over its spending. The projected cost of the Gateway Project in 2011 was $13.5 billion. Now it’s $24 billion and we are being warned the price will go up if financing isn’t secured soon? 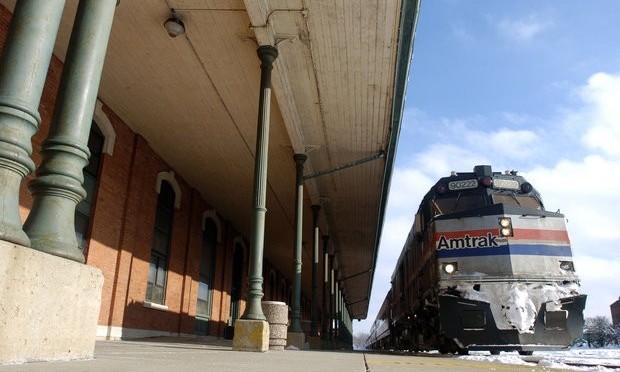 GARDEN CITY, Kan. (KSNW) — Congress is voting on hundreds of amendments to the appropriations bill. Congressman Roger Marshall recently voted for an amendment that could have drastically changed how rural Kansans travel.

“About once a month it seems like we’re using [Amtrak],” said Garden City resident Bob Tempel.

Several southwest Kansas cities are serviced by Amtrak every day. For Tempel, it’s how he regularly sees his daughter away at college.

“My daughter comes back and forth sometimes from Lawrence, and then we’re going out there. From a safety standpoint, we like that as well, so we’re not on the road as many hours.”

Last week the House voted on an amendment that would cut more than $1 billion of Amtrak’s funding.

The amendment did not pass, but Marshall, who represents Kansas’s most rural district, voted for it.

He said in a statement, “As long as we are subsidizing private entities like Amrtak (sic), we must be asking tough questions about how they are improving services, increasing competitiveness, and how they would stem the tide of declining ridership. We cannot just subsidize to maintain the status quo.

“They are critically important to our economy,” said Allen, “and we’re pleased to see that the House voted to continue those programs when they considered the transportation budget.”

Allen says any future cuts to Amtrak would be devastating.

“It would mean the elimination of the Southwest Chief. It’s a long-distance rail that connects, that terminates in both Chicago and Los Angeles and connects rural America across half the continent.”

The Southwest Chief line is one of few travel options left for the region.

There are currently no commercial flights in or out of Dodge City and Liberal for the foreseeable future because of Pen Air’s bankruptcy.

KSN reached out to Garden City’s airport to see if demand has increased since those flights stopped on Sunday, but they have not seen a significant change in ridership yet.