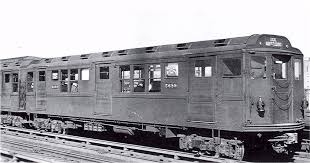 Just like some bloggers have established Thursday as “Door” Day, we are starting Friday as “Subway” day.

We’ve been over the ways modern infrastructure would help ease the crush of record ridership. But there’s no doubt, the subway system needs to expand. “Sure, it’s necessary! We have more people.”

So why does it cost 4 times per mile than in London?

Then it is not like Dubai, NY City has cables that Thomas Edison put in.

We also have high labor costs here because it’s an expensive city but also we have unions that aren’t necessarily the most efficient way to build a new subway.

And we’ve been building stations that are nice and big but more cavernous than they really need to be. On Second Avenue, the stations account for more than half the total budget.
***********
McDonald’s doesn’t have its own TV show. Neither does Burger King. Shake Shack doesn’t have one either. That leaves Wahlburgers as the only hamburger restaurant chain with its own TV show that you could describe as a program-length commercial for the brand. Then they own the new Wahlburgers at 85th and Second. This new location seems reasonably successful so far. Plus, it’s near the new Second Avenue subway on a portion of the avenue that has been fixed up considerably. Well played, Wahlbergs.

Empty stores plague the streets of the Upper East Side like an epidemic. Known affectionately as the ‘Gold Coast’, this area was home to trendy store front like American Apparel, Reebok, BCBG MAXAZRIA and oldies like Filenes Basement, all of whom have since shut. in July there were 82 vacant storefronts along Madison, Lexington, Third and Second avenues between 57th and 96th streets. “That is a lot, and there’s probably 20 percent more that’s on the market,” with space that is occupied but available for lease. It was a LOOOONG Wait for the 2nd Avenue Subway!

Council Membersare scratching their heads on funding. The hearing comes amid an increasingly testy fight between the city and state over the MTA’s recently announced $836 million rescue plan for the crisis affecting the city’s subways. MTA Chair Joe Lhota, recently appointed by Governor Andrew Cuomo, has insisted that the city provide $456 million for the emergency upgrade plan to stabilize the system over the next year. Mayor Bill de Blasio has refused to bear those costs, pointing to an equal amount of city-issued funds that have been diverted since 2011 by the state from their intended use in MTA operations. De Blasio on Monday proposed increasing taxes on the wealthy to fund the MTA, but the proposal was quickly dismissed by state Senate Republicans who would have to approve it. “You guys do not know how to spend a dime, how could you spend a billion dollars?”

The reason isn’t what you think it is.

From almost the time cars were first sold, there has been complaints that there weren’t enough roads. With this came the belief that if only more roads were built and current roads expanded then traffic congestion would go away and everyone would be happy. But this has yet to happen. The fact is as more roads are built, traffic continues to grow and get worse. Called induced demand, the more places people can drive, the more people will drive. But when there is less road capacity, traffic congestion goes down. A good example of this was the expansion of the 405 freeway between Westwood in west Los Angeles to Ventura Blvd in the San Fernando Valley through the Sepulveda Pass. Over the weekend starting on the evening of Friday July 15, 2011, the 405 was closed through the…