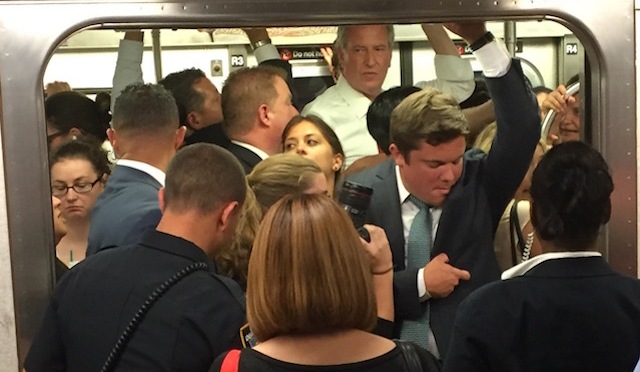 The Mayor is on the 7 Train.

A tipster spotted de Blasio at around 5:45 p.m. today, onboard a “very crowded” Queens-bound train at the Bryant Park platform. This was in the midst of today’s evening commute madness.
De Blasio has been spotted on the train a few times of late, notably on an uptown C train in June. After that appearance, his office told the Times the Mayor rode the subway in April.

On one hand, these subway photo-ops are pandering to a delay-weary constituency. On the other, that constituency is nearly 5.7 million strong. If those people—your voters—are suffering, shouldn’t you try and share their pain?

Which brings us to the elected official who can actually do a great deal to improve subway service: Governor Andrew Cuomo. He and the mayor were both at a rally to defend the Affordable Care Act earlier on Monday afternoon, but it appears they parted ways.
Maybe we’ll get a tip that Cuomo is on the subway right now — but it seems that the governor’s last subway photo op was on the new stretch of the Second Avenue Subway, before it opened to the public. On New Year’s Eve.

We’ve contacted Cuomo’s office to confirm, and will update if and when we hear back.

Gimenez’s $534 million proposal for rapid-bus routes would indefinitely defer the Metrorail expansion promised voters in 2002 during a referendum for a half-percent transportation tax that currently generates about $250 million a year.

It also would leave the mayor’s celebrated SMART Plan to expand rapid transit countywide mostly as a blueprint for faster bus service in the short-term rather than an historic expansion of rail in multiple directions countywide. Gimenez and his aides did say there is enough money in the current 40-year financial forecasts to allow Miami-Dade to help subsidize an expansion of Tri-Rail along existing private-sector tracks that run parallel to Biscayne Boulevard in Northeast Miami-Dade.

Other elected leaders said they would refuse to drop the rail ambitions that have come to surround the SMART Plan. Gimenez unveiled the plan during his reelection campaign last year, then touted it on a television ad under the headline “More Rail Lines.”

By purchasing land for dedicated bus lanes along Northwest 27th Avenue, Miami-Dade would secure real estate needed for a future rail line there if the county could afford one in the future, said Alice Bravo, Gimenez’s transit chief. “What you do now is a down payment for future rail,” she said.

Esteban “Steve” Bovo, chairman of the County Commission, said he had been holding back proposed legislation designed to accelerate rail plans so that it would not conflict with the administration’s pending plans. Bovo said he would introduce legislation inviting private developers to submit transit proposals for the SMART Plan’s six corridors, and that he wants Miami-Dade to pour money into one of them to prove something impressive can get built.

The futuristic transport system Hyperloop has come a long way since entrepreneur Elon Musk proposed a “fifth mode of transport” in 2012. The concept, in which commuters are whisked through a tube at speeds in excess of 700mph, has developed rapidly with inventors and investors giving their backing.

While it may have seemed like fantasy, and there are still lots of reasons to be skeptical about this “future of transport”, plans for Hyperloop and the companies behind it are making progress towards their first operational tunnels.

But what is a Hyperloop? Why does Musk back the idea? Who are the companies pushing the tech? Read on to get beyond the hype and see if you are a Hyperloop believer.

What is Hyperloop and how does it work?

Hyperloop is a proposed system of transport that would see pods or containers travel at high speeds through a tube that has been pumped into a near-vacuum. The train pods would either float using magnetic levitation technology or float using air caster “skis”, similar to how pucks travel across an air hockey table.

With so little friction in the tunnel, the pods would be able to travel at immense speeds with a projected top speeds of 760mph.

The pod would initially launch using an electric motor before levitation takes place and the pod can glide at cruising speed in the low-pressure environment. Tunnels for the Hyperloop would be built either above or below ground, at only around 3m in diameter, taking up a smaller ground footprint than traditional rail and road.

Many of the current designs feature autonomous pods that can be launched on demand as frequently as every 20 seconds. Others suggest eco-friendly designs, powering the pressure pumps with clean energy such as solar.

Plenty of companies jumping into this. The Louisville-Chicago HYPERLOOP is still looking for investors! How much per mile? Answer varies…..means nobody certain yet.