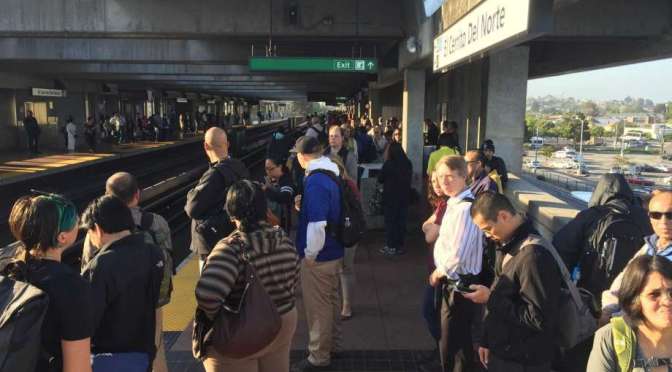 All from California Rail News

First Item: The oldest equipment for the Blue Line dates back to 1990 which is being replaced while major maintenance is also underway for both the Blue and Green Lines. San Diego recently overhauled its oldest Trolley Lines: the Blue and Orange Lines and replaced its original cars from 1982. Meanwhile BART is still using most of its original cars placed in service in 1972 and its original computerize signalling system from the 1970’s which is incompatible with modern computer systems today.

Second Item: You know the feeling: You step into a BART car and are immediately hit with a wave of stagnant, desert-hot air. Trapped in the Transbay Tube, you start counting the minutes until you’re at the next station where, despite the hot temperatures outside, the opening doors will still give you a second to gasp in some fresh air.
Why are some BART cars so darn hot? And what should you do if you’re trapped in a sauna pod?

The reason why cars can reach Saharan temperatures should come as no surprise — the system was not built to be used by the number of commuters who utilize it today. The trains were originally built with vents near the windows to cool seated passengers, which is why when you’re standing elbow-to-elbow, the air feels like it’s never getting to you.
Add in the obvious (packed trains, hot outdoor temperatures, body heat, etc.) and you’re in for an unpleasant ride.
Unfortunately, there’s nothing your train driver can do to fix the problem. Unlike your vehicle, BART cars’ air conditioning is not controlled by the driver. If you’re suffering, the best thing to do is to note the car number (you can find this above the doors or near the intercom) call the driver on the intercom and let them know the problem. They can pass this information along to maintenance so the car can be inspected on its next maintenance cycle.

Only a few hours after BART recovered from major delays caused by an equipment problem that snarled trains on the Richmond line, another equipment malfunction next day began causing 30-minute delays at the Union City station, officials said.
BART first reported an equipment problem in the Union City area about 10:47 a.m., advising that the problem was causing a ten minute delay along the Fremont line in the Warm Springs, Fremont, Richmond and Daly City directions.
At 12:30 p.m., BART was reporting that the problem was causing 20 to 30 minute delays at the Union City station.

BART directors will consider a policy that seeks to protect people from immigration raids while riding the transit system or while trying to get a job with it. But the proposal doesn’t use the word “sanctuary” or advocate ignoring federal law.

The Director had better watch his step. Look at what happened to the NYC MTA Director who delayed trains to help two cats out.