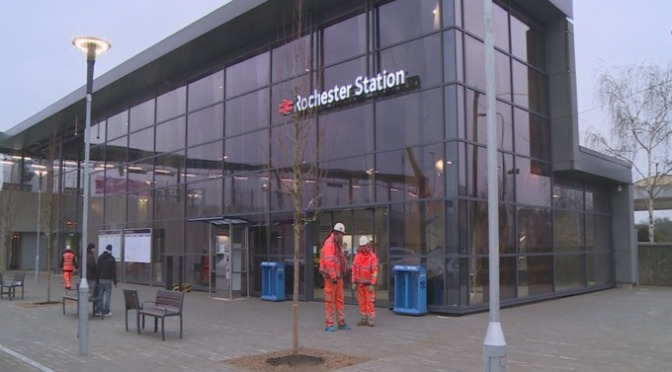 It was only supposed to be a temporary solution. Thirty-seven years after the Rochester train station was built, construction is now near completion for a new hub for Amtrak and CSX and an enhanced traveling experience for passengers.

Together with area business owners, Congresswoman Louise Slaughter, D-Fairport, led a tour of the new train station that’s slated to be completed in a few weeks. She helped secure a $15 million grant from the Federal Railroad Administration to help fund the expansion.

The remodel was much needed to help grow businesses and to serve the entire community, Slaughter said.

“Our community is blessed to be close to so many major cities and this new state-of-the-art, ADA-compliant station will help move goods and people where they need to go and encourage new companies to open their doors right here in Monroe County,” Slaughter said.

The project will be fully compliant with the Americans with Disabilities Act. Once completed, it will feature 12,000 square feet of space, including a passenger concourse, platform and passenger display systems. The station will offer full access to the platform by elevators, escalators, stairs and ramps. Currently, passengers must climb up steps to board the train and passengers with disabilities need to use a lift.

Infrastructure is critical to the success of area businesses and trains are as important as other modes of transportation, Slaughter said. Many passengers prefer to take the train versus flying so they can relax and stretch out on the ride, she said.

Irondequoit resident Marlene Canavan agrees. She was waiting for her daughter, Darla, to arrive from New York City at the train station. Her daughter switches between flying and taking the train and sometimes prefers the train because it is time consuming to go through airport security. Canavan is eager to see the upgrades to the Rochester train station.

Having a good infrastructure for different transportation is important for businesses in the area, said John Hart, CEO of Lumetrics in Henrietta. The infrastructure helps bring customers in, he said.

Trips that do not make as much money like some Harrisburg trains are killed.

Going South, there are no alternatives to switch too like Grand Central.

Amtrak CEO Wick Moorman is stepping down at the end of the year, and will be replaced by former Delta CEO Richard Anderson, according to knowledgeable sources and confirmed Monday by Amtrak.

The two men will serve as co-CEOs until the end of December.

Anderson, a 62-year-old former prosecutor from Texas, rose through the ranks of the airline industry to become CEO of Delta in 2007, just as it was leaving bankruptcy.

By the time Moorman steps down, he will have served roughly a year and a half as Amtrak’s CEO.

Moorman is himself a private sector transportation “icon,” said Amtrak chairman Tony Coscia. Both he and Moorman said it was always their plan for Moorman to be a temporary CEO.

“When I came to Amtrak, I had a clear understanding with my wife about how long I could do it,” Moorman said. “And in fact, I have exceeded that, as she points out to me.”

One of Moorman’s tasks, said Coscia, was “to help us recruit a CEO of the company who will serve as a long-term CEO.”

Moorman called Anderson a “superlative” leader and said they’ll be serving as co-CEOs for a half year because, “The one thing he doesn’t know is the railroad business, which obviously is my background.”

“And then I’ll have some ongoing role after that to assist him,” Moorman said.

The news comes during a tumultuous time for Amtrak. It’s just starting emergency repairs to the tracks beneath Penn Station, in the aftermath of two recent derailments there.