Most of us do not realize that the Lehigh Valley Railroad crossed NY State.

Yes, it was important in New York City. It owned the Starret-Lehigh Building.

But it’s flagship passenger train the Black Diamond; cut right through the state. 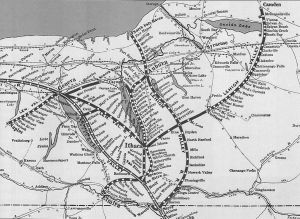 From 1896 until 1959 the flagship passenger train on the Lehigh Valley Railroad was the Black Diamond Express. Before there were commercial air routes, the fastest way to get from New York City to Buffalo was by train.

The Lehigh Valley Railroad was one of several anthracite coal railroads that arose in eastern Pennsylvania, New Jersey and New York in the 1850s. In the next few decades the Lehigh Valley acquired several “short lines.” In 1892, the Lehigh Valley secured its own direct route between the Atlantic seaboard and Buffalo on Lake Erie, giving the railroad direct access to the Great Lakes as an expanding market for its Pennsylvania coal.

Not content with just transporting coal and other products, the Lehigh Valley embarked on making a serious bid to capture much of the lucrative New York City/Buffalo passenger business away from the New York Central Railroad and the Delaware, Lackawanna and Western Railroad. The Lehigh Valley Railroad management decided to initiate a luxury express train that could make the trip from Jersey City (the Lehigh’s New York metropolitan station) to Buffalo in just over nine-and-a-half hours.

In an effort to generate some national pre-inaugural publicity, the Lehigh Valley conducted a naming contest for this passenger train. Receiving approximately 35,000 entries, railroad management chose the name “Black Diamond Express,” suggested by Charles M. Montgomery of Toledo, Ohio. Montgomery said he settled on a name “most befitting the premier train of a railroad whose history and revenues were so closely intertwined with anthracite,” which had been referred to as “black diamonds.” Montgomery received a $25 cash prize.

The Black Diamond Express made its inaugural run on Monday, May 18, 1896. There were actually two trains — the Number 9 was the eastbound train and the Number 10 was the westbound train. Both left their respective stations (Buffalo for No. 9 and Jersey City for No. 10) at noon to travel the 447.6 miles in 10 hours and 20 minutes at an average speed of 44 miles an hour. Each train consisted of one baggage and library car, two day coaches, a dining car and one Pullman parlor car with an observation end. With the engine, the train itself was about 315 feet long.

The railroad advertised the Black Diamond Express as “The Handsomest Train in the World.” The dining car was presided over by chefs, according to railroad advertising, whose culinary artistry featured “preparing and serving substantials and delicacies in a most appetizing fashion.” The locomotive was a Baldwin 4-4-2.

The Black Diamond Express passed through Seneca County on its route between stops at Sayre, Pa., and Geneva, N.Y. Initially the Black Diamond routing was via the Seneca Lake freight bypass, rather than the Main Line between Ithaca and Geneva Junction (so named because at that point the Lehigh Valley and New York Central rails met). This made it possible to avoid the grades up out of Ithaca, thus shaving precious minutes from the train’s running time. On April 21, 1897, the train made the 44-mile stretch between Alpine and Geneva Junction at an average speed of 80 miles per hour.

When the government stepped in with modern “Cosmopolitan” cars (1970’s). At that time, someone sent us an article that had a proposal for bar cars. After 30+ years we seem to have lost the source, but will reprint it below anyway.

And it is growing too!

When the restored Greenbush Line opens at the end of next year, you can add 12 more round trips.

Worcester gets it’s 10 more round trips, as currently being negotiated.