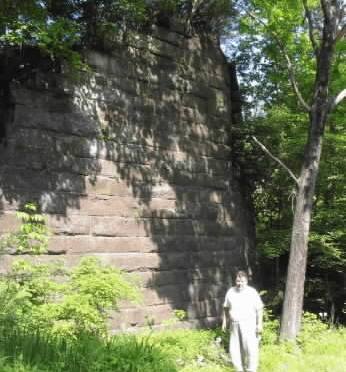 Photo by B L Rudberg
The fellow in the photo is Joe Mato.

Find out more about the P&C Railroad
https://penneyandkc.wordpress.com/one-of-the-railroads-that-made-up-the-cne-railway-was-the-poughkeepsie-connecticut/ 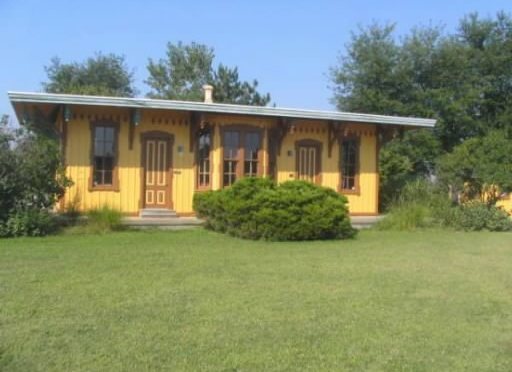 It now has a fresh coat of yellow and brown which is more like authentic railroad colors. The paint job is not completed yet. You can see that the rain gutter and some of the roof braces are still blue. The new colors are a big improvement over the faded and peeling blue.

Find out more about the towns North o Poughkeepsie
https://penneyandkc.wordpress.com/poughkeepsie-eastern-north-from-poughkeepsie/

From the collection of Roger Liller

Find out more about the P&E in Poughkeepsie
https://penneyandkc.wordpress.com/poughkeepsie-eastern-in-the-poughkeepsie-area/ 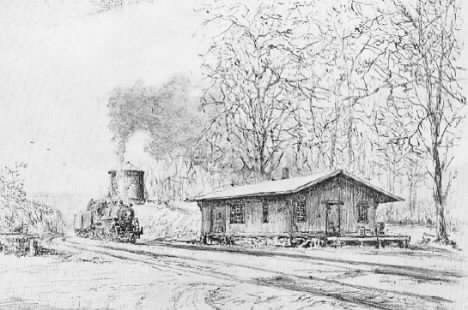 The Central New England Railway (CNE) / Newburgh, Dutchess and Connecticut Railroad between Pine Plains and Millerton over Winchell Mountain. This was the highest climb that the old steamers had to make on the line with deep rock cuts at the top. It was completed in 1871 and filled up with snow in every big winter storm. Some of the photos are from the infamous “Blizzard of 88”. It is easy to see why this line was abandoned in 1925 after the CNE took over. The CNE stopped using this route in favor the longer P&E route that went around the mountain instead of over it. By 1938 all of the lines were gone.

This section has several drawings by Victor Westman.

Victor Westman is an engineer retired from the Harlem line and living in Danbury CT. His drawings were intended for a book which Robert Adams was writing about the CNE and ND&C. Unfortunately Adams passed away before the manuscript was completed and the book was never published. Some of these pictures have been used previously in Christmas card illustrations.

Yes there was an old creamery on the liine too!

Ruins of the Clover Farms creamery at Shekomeko.

ND&C RR at Egglestons crossing between Shekomeko and Winchells on 20 March 1888. This was 8 days after the great blizzard of 1888. It took 6 days of snow clearing to get from Beacon to Pine Plains. Winchells cut was blocked full of snow. The ND&C hired 200 men with shovels to clear the cut. The first train to reach Millerton was on Sunday 25 March, a full 13 days after the storm.

Collection of the Beacon Historical Society

Perhaps the best known weather battle was the great blizzard of March 1888. Volume 25 of the ND&C letterbooks contains the saga of dealing with the infamous “Blizzard of 88“. On 10 March 1888 the conditions were so dry that sparks from the stack of NY&NE engine #98 set a half dozen grass fires which threatened the Van Wyck buildings in Fishkill Village. Two days later the snow reports began coming in.

From here it is downhill into Millerton.

Last freight car on CNE/ND&C spur at Dutchess Avenue in 1958 prior to line being torn up. This car and others were hauled up to the site of the former station by a truck and were returned to the NYC connection by gravity with two or three people working the brakes.

The following is a first person description of moving freight cars through the streets of Millerton. This was written by Jack Shufelt and he recalls the process of rolling cars downhill through Millerton using a truck for motive power to connect with the NYC Harlem line.

The ND&C tracks ran very near the P&C and P&E at McIntyre but did not actually connect. Farther north at Stissing Junction the P&E joined the ND&C. The P&E leased trackage rights on the ND&C from Stissing Junction to Pine Plains. The P&E was perpetually in financial trouble and often failed to pay the monthly rental fee. When the ND&C threatened to lock out the switches they would somehow come up with the money. In the above photo, the box car is on the ND&C tracks. The line at right is the P&E to Salt Point, Pleasant Valley and Poughkeepsie.

Of course in 1932 both of these lines actually belonged to the New Haven RR. Six years later these tracks were torn out and sold for scrap to Japan in 1938.

Near the north end of the tangent near Pine Plains is the ruins of a creamery. The ND&C RR ran on the left side of the building by the smokestack. There was a short siding on a ramp up to a door in the shadows at left.

A lot bigger than the milk shed further down the line.

Take a look at our WebSite to see more on Stissing Junction, the milk industry and many other fascinating subjects.

The dairy business was a big part of ND&C operations. Farmers would put milk in 10 gallon cans and bring the cans to a railroad pickup point. Trains would collect the cans and haul them to a local creamery for bottling and shipping to New York City. This stand was located in Arthursburg along the ND&C tracks. You can see part of route 82 behind the stand.

Check out this page for more photos and stories
https://penneyandkc.wordpress.com/cnendc-hopewell-jct-to-millbrook/