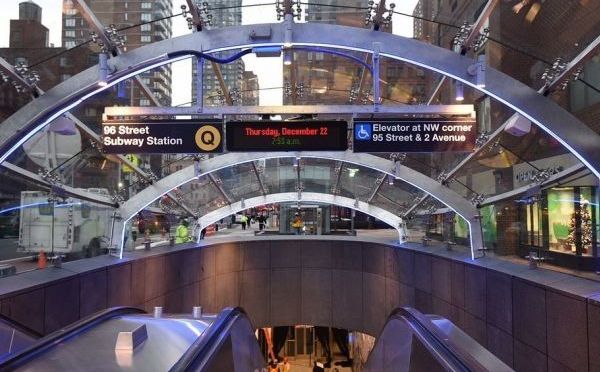 From the Upper East Side Patch

Historically, taxi ridership on the Upper East Side is much higher than the citywide average, especially among commuters.

The arrival of the Second Avenue Subway has been a blessing for Upper East Siders, but a nightmare for cab drivers. A new study from the NYU Rudin Center for Transportation shows taxi pickups and drop-offs have plummeted in the neighborhood since it opened in January.

With the “unique combination of higher median incomes and inadequate subway service,” the neighborhood’s commuters had a high reliance on taxis, Kaufman told Patch. In the eastern part of Lenox Hill, 9 percent of residents said they commuted to work by taxi in a 2015 American Community Survey. The same survey showed that in the eastern part of Yorkville, which used to boast the furthest walking distance from a subway line in Manhattan, 7.3 percent of residents commuted by taxi. Those numbers were much higher than the Manhattan average of 2.9 percent.

Bloomberg News has sounded off on Governor Christie of New Jersey

In Hoboken, a major hub for New York-bound commuters, a “worn and chipped” track switch remained in use more than three months after it was identified, according to documents that New Jersey Transit provided after a public-records request. The faulty part, cited as a possible cause of a minor two-car derailment in 2014, endangered “thousands of commuters” a day, a Federal Railroad Administration inspector wrote.

“This car had two wooden chocks under the first wheel, the only measure taken to prevent this string of 13 cars from rolling,” inspector Sean Fitzpatrick wrote in August 2016.

The reports come to light as Amtrak and New Jersey Transit, which share tracks under the Hudson River to Manhattan, tell riders to expect months of inconvenience due to maintenance and repairs after two Amtrak derailments at New York Pennsylvania Station. At the same time, Christie is withholding millions of dollars in fees due to Amtrak to keep its rails in good shape.

“If that’s the political game — pointing across the river to hide your own mismanagement — that’s unacceptable,” said Assemblyman John McKeon, a Democrat presiding over hearings on New Jersey Transit after a fatal wreck in Hoboken in September.

In all, New Jersey Transit faces 67 citations reported over two years that have yet to be settled, as railroads typically litigate them for years.

Passengers already suffer mounting delays and crowding at the hands of the nation’s second-busiest railroad, plus the long-term threat of a failure in Amtrak’s flood-damaged Hudson tunnel. Christie in 2010 canceled construction of a second tunnel, and President Donald Trump’s budget blueprint includes no funding for another passage, part of Amtrak’s proposed $23 billion Gateway project.

No injuries or fatalities have been linked to New Jersey Transit’s violations. In the 2014 Hoboken incident, “passengers were quickly escorted off the train,” Nancy Snyder, a New Jersey Transit spokeswoman, said in an email. The derailment, she said, “was not caused by NJT equipment nor human error, and the FRA inspector finding remains in dispute.”

“We’ve done a lot of things to our railroad in the past two years,” Santoro said. “I can unequivocally say the railroad’s safe.”

As a whole, the reports detail a broader and more serious scope of troubles beyond those disclosed by the railroad at a legislative hearing in November.

In March 2015, for instance, a technician at a Morris County crossing used unapproved cables to bypass wiring that controls gates, warning lights and bells, then failed to reset the circuit, according to the reports. A crew noticed the defect while their train was in the crossing; the technician was given 10 days off without pay.