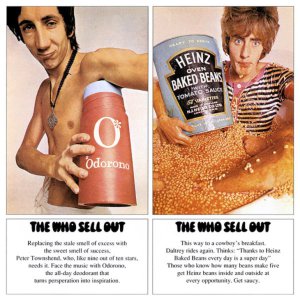 Tired of all those mid-60’s by-the-numbers psychedelic albums? Sick of having to decipher their pseudo-philosophical lyrics only to find out that they mean nothing? Do not despair. With The Who Sell Out you can now have a psych album that’s both funny and rocking!

A band that had been in the business for 3 years by then, The Who previously brought you hits like I Can’t Explain, My Generation and I’m a Boy. But this is the first time an album of theirs feels like a cohesive whole.

But wait, there’s more: their re-creation of radio-inspired commercials and public service announcements makes The Who Sell Out one of the earliest examples of a concept album!

And then there’s the songs themselves. With one weird guitar trick Townshend makes Armenia City in the Sky the band’s most psychedelic song of all-time.

Odorono starts out as a bit of…