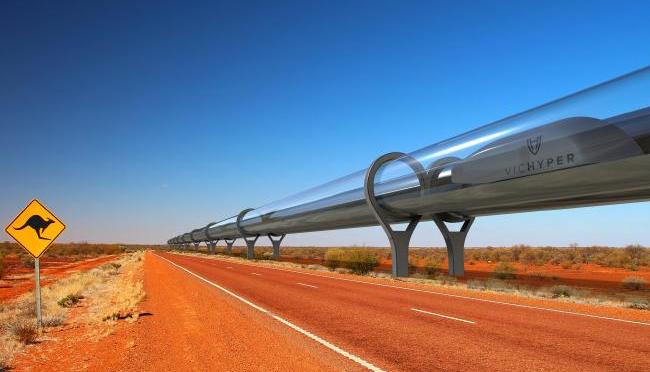 The Hyperloop, is the latest and greatest in ground transportation. Made sort of famous by Elon Musk, it uses vacuum tubes to move containers that hold people and cargo. The United States is sort of behind the rest of the World, so let’s first of all talk of Australia.

The Hyperloop zips around in a tube at 1000+ km/h (620+ mph). These high speeds have the possibility to shorten travel times, making it easier to get from city to city.

Despite skepticism, Hyperloop One hopes to connect Sydney and Melbourne in Australia. Passengers can travel between the two in under an hour.

Now, officials from Hyperloop One are proposing that the Hyperloop could eventually merge the cities of Sydney and Melbourne, creating one huge megacity. The best part? Travel time is around an hour.

“We’ll make Sydney and Melbourne really connected to each other. If you connect two cities with Hyperloop, you get, effectively, a sort of global city punching above its weight in a global economy,”says Hyperloop One VP Alan James.

For those unfamiliar with the technology, Hyperloop is essentially a passenger/cargo carrying capsule that zips around in a tube at 1000+ km/h (620+ mph). Those speeds promise to change the very urban landscape.

But the system does face a lot of skepticism. A real Hyperloop test hasn’t really been done, so we can’t see the effects on humans or cargo that travel on it. Also, there are no estimates on the massive infrastructure costs that could be associated with building Hyperloop tracks.

If it were to work out, though, a ticket from Sydney to melbourne would be booked via an app and cost less than a full-priced, last minute plane ticket.

Now a lot of projects on the drawing boards in U.S. Only today will mention the two that our company is involved in. The bigger one is linking Chicago and Louisville. The smaller one is on an unused railroad in Metropolitan New York City. It will link Beacon Station on the Metro-North Railroad Hudson Division with Southeast Station on the Metro-North Railroad Harlem Division. More and more people live in the area between the two stations and if they work in New York City must choose which station they will drive to. Next week we will be attending a site visit conducted by the Metropolitan Transportation Authority!

We do not compute, we calculate.