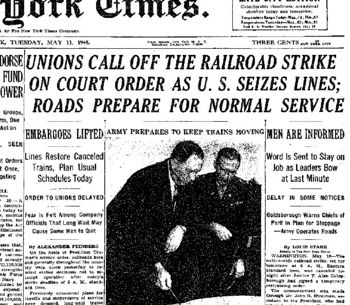 August 27, 1950 As he did in 1946, Pres. Harry Truman seizes the nation’s railroads to prevent a strike, this time citing “national security” in the opening months of the Korean War. 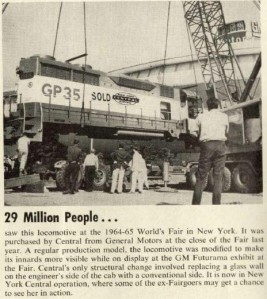 August 24, 1916 Due to several serious accidents caused by broken red lenses, the New York Central discontinues using white lights as an indication to proceed. The new color is green.

August 15, 1909 The New York Central adds a Boston-Chicago car to the 20th Century Limited. The car is scheduled at 20 hours and 30 minutes.

August 14, 1869 The Lake Shore & Michigan Southern acquires the Schoolcraft & Three Rivers and the Kalamazoo & Schoolcraft railroads. It joins the companies and changes the name to the Kalamazoo & White Pigeon. The K&WP will remain an extant company in the New York Central System and in Penn Central. It will be dissolved with the formation of Conrail in 1976.

August 14, 1924 The New York Central tests a GE Diesel-electric locomotive. The locomotive succeeds in starting a train of 93 cars [empties? loads? a mix?] on level track.

August 10, 1844 The Central Railroad of Michigan reaches Marshall from the east.

August 10, 1858 Amasa Stone of Cleveland, a pro-New York Central figure, is elected President of the Cleveland, Painesville & Ashtabula Railroad. He is credited with bringing the Lake Shore line into the NYC camp and blocking the western expansion of the Erie.

August 9, 1831 The “DeWitt Clinton” makes its first regular run on the Mohawk & Hudson (later NYC) between Albany and Schenectady, opening the first railroad in New York State. The locomotive eventually proves to be too light, and teams of horses will pull most M&H trains. 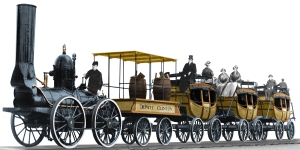 I’ve wanted to do one of these since I discovered Tom Gauld’s cultural cartoons for The Guardian. Of course, mine pales in the comparison, but still. check your robo-architectural skills!

“I Feel Love” is the newest Brooklyn warehouse party, except it’s 70s themed…but it also has a bunch of famous DJs, and it’s also a hotel…but it’s also not.

OK I DON’T HAVE ANY IDEA WHAT IT IS, BUT I’M DOING IT.

Look at these insane tickets my roommate and I got in the mail:

WTF DO THEY EVEN MEAN? WHAT IS THIS “IT” THAT I AM SUPPOSED TO FEEL?

It’s an immersive experience, I get that. Maybe like Sleep No More? Either way, it sounds awesome. The website says some weird shit, but nothing quite telling enough. I mean, look at this:

“Throughout the experience you may be offered alcoholic beverages, if you do not wish to partake feel free to decline. Also note, this experience may include nudity.”

That was all in one bullet point about the event. How do those things even RELATE?

I live by the Baltic sea and to watch the water is exciting.

At Askö Laboratory Day this year, we learned how to discover little fishes homes in the water. If you watch them for a while you will find out were they building their homes. We also learned that the ninespine stickleback fishguys get blue and red when they search for fishwomen.

We could also watch broadnosed pipefishes and many other little creatures in the sea.

I really like that open house day at Askö lab. There is so much to learn about marine nature.

You can read Tångbloggen or Baltic sea weed if you want to read more about what’s happening in our waters.

I watched the water at my place the other day and I found the red/blue little fishes and a broadnosed pipefish. I felt so lucky to get the chance of watching the amazing…

Snippets 78. In the first snippet of this year we looked at a quote from Jonathan and his Continent, by Max O’Rell, one of my favourite ‘forgotten’ authors. Published in 1889, his book looks at American life and customs at the time. The following quote concerns the rather alarming eating habits of an American lady on board a ship.

I shall never forget a young American girl who sat at the same table as myself on board the steamer. The dear child, who was about seventeen, performed prodigies. I could scarcely believe my eyes, and watched her with never-flagging interest. What appetite! What a little table d’hote ogress! I trembled for our supplies, and wondered whether the Company had foreseen the danger.

First of all, at seven in the morning, tea and bread-and-butter was taken to the hungry one in her cabin. At half-past eight, she…