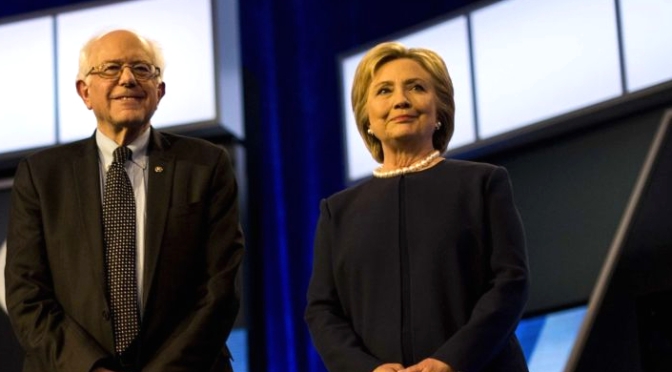 Donald Trump would be a disaster and an embarrassment for our country if he were elected president. His campaign is not based on anything of substance — improving the economy, our education system, healthcare or the environment. It is based on bigotry. He is attempting to win this election by fomenting hatred against Mexicans and Muslims. He has crudely insulted women. And as a leader of the “birther movement,” he tried to undermine the legitimacy of our first African American president. That is not just my point of view. That’s the perspective of a number of conservative Republicans.

On virtually every major issue facing this country and the needs of working families, Clinton’s positions are far superior to Trump’s. Our campaigns worked together to produce the most progressive platform in the history of American politics. Trump’s campaign wrote one of the most reactionary documents.

Clinton understands that Citizens United has undermined our democracy. She will nominate justices who are prepared to overturn that Supreme Court decision, which made it possible for billionaires to buy elections. Her court appointees also would protect a woman’s right to choose, workers’ rights, the rights of the LGBT community, the needs of minorities and immigrants and the government’s ability to protect the environment.

Trump, on the other hand, has made it clear that his Supreme Court appointees would preserve the court’s right-wing majority.

Clinton understands that in a competitive global economy we need the best-educated workforce in the world. She and I worked together on a proposal that will revolutionize higher education in America. It will guarantee that the children of any family in this country with an annual income of $125,000 a year or less – 83% of our population – will be able to go to a public college or university tuition free. This proposal also substantially reduces student debt.

Trump, on the other hand, has barely said a word about higher education.

Clinton understands that at a time of massive income and wealth inequality, it is absurd to provide huge tax breaks to the very rich.

Trump, on the other hand, wants billionaire families like his to enjoy hundreds of billions of dollars in new tax breaks.

Clinton understands that climate change is real, is caused by human activity and is one of the great environmental crises facing our planet. She knows that we must transform our energy system away from fossil fuels and move aggressively to energy efficiency and sustainable energy.

Trump, on the other hand, like most Republicans, rejects science and the conclusions of almost all major researchers in the field. He believes that climate change is a “hoax,” and that there’s no need to address it.

Clinton understands that this country must move toward universal healthcare. She wants to see that all Americans have the right to choose a public option in their healthcare exchange, that anyone 55 or older should be able to opt in to Medicare, and that we must greatly improve primary healthcare through a major expansion of community health centers. She also wants to lower the outrageously high cost of prescription drugs.

And what is Donald Trump’s position on healthcare? He wants to abolish the Affordable Care Act, throw 20 million people off the health insurance they currently have and cut Medicaid for lower-income Americans.

During the primaries, my supporters and I began a political revolution to transform America. That revolution continues as Hillary Clinton seeks the White House. It will continue after the election. It will continue until we create a government which represents all of us and not just the 1 percent – a government based on the principle of economic, social, racial and environmental justice.

I understand that many of my supporters are disappointed by the final results of the nominating process, but being despondent and inactive is not going to improve anything. Going forward and continuing the struggle is what matters. And, in that struggle, the most immediate task we face is to defeat Donald Trump.

One thought on “I Support Hillary Clinton. So Should Everyone Who Voted for Me”