From my manager: “I got into HYPERLOOP because I was currently developing a rail link from Chicago to Louisville. Why would I build a 70 mph system when a 700 mph system is available?I hope you will accept my invitation to be technical consultant for our project. We need to build from Gary, Indiana through Indiana in Interstate 65 median, to Jeffersonville, then cross Ohio River to downtown Louisville. We already go from Chicago to Gary on South Shore Railroad. Let’s talk!”

Thunderf00t has released another video on the Hyperloop.

In it he takes the fans of Elon Musk to task and references the Hyperloop Alpha Document.  I took a look at it and from a professional’s standpoint, it’s a very interesting diagram, but not in a good way.

As I pointed out, the essential ideas around vactrains have been around for a long time.

In that post is discussed the maglev, vacuum and operational concerns of the system, but didn’t actually look into the alpha document itself, because quite frankly the Hyperloop had all those other issues that looking a the paper itself was unnecessary and I didn’t even think to look for it.  Well now I have and there are a lot of things that just don’t make sense to me. Here it is.

"I'm fortunate that I'm making a living at it now because I'm not equipped to do anything else."
– Sonny Rollins pic.twitter.com/43K8q3Cg8a

Below is a feature we have done in the past. We take « This Date In NY Central History » which is published by Mark Tomlonson ; then add links and pictures that we find. Yes, you can add comments to our blog !

July 22, 1920 William K. Vanderbilt dies. His son, Harold S. Vanderbilt inherits half of his father’s fortune and takes the family seat on the New York Central Board. He was Chairman of the Board until he was ousted by Robert Young in a stock proxy battle.

July 22, 1942 The United States begins compulsory civilian gasoline rationing due to World War II. The rationing will cause rail ridership, which has been in a steady decline since 1916, to markedly increase. This increase will cause many railroads to invest heavily in new passenger equipment after the war.

July 23, 1966 In a combination publicity stunt and test of how track functions under high speeds, a New York Central jet powered Rail Diesel Car hits 183.85 mph near Stryker, OH. Some of the data obtained from the test will be used in the design of the Metroliners. Read more about Rail Diesel Cars

July 21, 1958 The New York Central begins carrying mail between Chicago and Detroit in special “Flexi-Van” containers. The vans designated for mail are equipped with side doors. “Flexi-Van” service is expended to Boston and St. Louis. 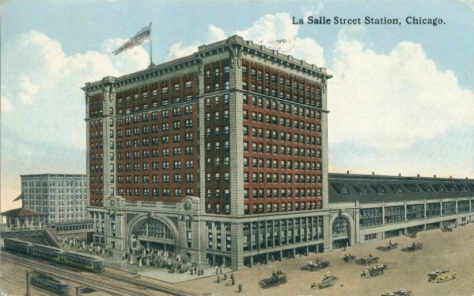 July 7, 1853 The ten railroads linking Albany and Buffalo file papers with the Secretary of State of New York forming the New York Central. It becomes the largest railroad in the U.S. in terms of mileage, capitalization and net worth. (Some sources say May 17)
Early New York Central history

July 5, 1915 The New York Central sells the Nickel Plate to the van Swearingen brothers. NYC fears that because much of NKP’s track parallels NYC’s, NYC could be liable for prosecution under anti-trust laws. See their history

July 30, 1877 The strike ends on the New York Central & Hudson River Railroad as workers at the West Albany shops return to their jobs.