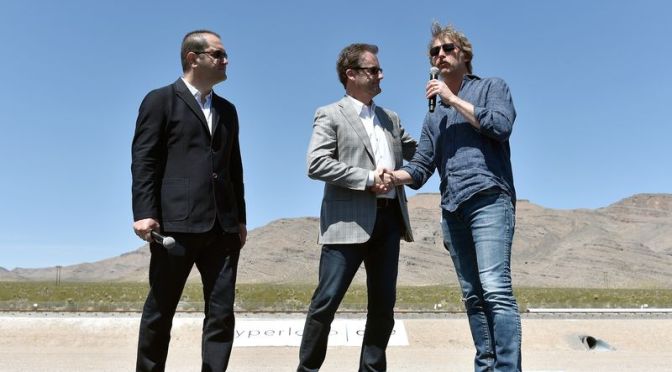 Brogan BamBrogan, the co-founder and chief technology officer at Hyperloop One, has stepped back from his role at the company. The former Senior Vice President of Engineering Josh Giegel will be assuming BamBrogan’s role and has been promoted to co-founder and president of engineering and has joined the board, Recode has confirmed.

Hyperloop One is one of two companies competing to make Elon Musk’s dream of a high-speed mass transit system a reality. Sources say there has been internal tension brewing at the company among the executives and that it was the cause of many of the abruptly made executive changes. This comes at a time when the company is gaining momentum: On June 21, the company signed a deal with a Russian firm Summa group as well as the Russian government to construct a Hyperloop in Moscow. Just one month prior, Hyperloop One performed the first successful public test of its open-air propulsion system in Las Vegas.

The company made the title changes late this week just a few days after Afshin Pishevar, the chief legal officer and brother of chairman Shervin Pishevar, had been removed from his post. Afshin had been with the company since its inception. A source says Pishevar, along with his assistant general counsel David Pendergast, were out at the company as early as last week.

“Hyperloop One is pleased to announce that Josh Giegel has been promoted to President of Engineering and appointed to the Board of Directors. Josh has been a valued engineering leader as co-founder and SVP of Engineering since the company’s inception,” the company said in a statement. “Co-founder and CTO Brogan BamBrogan has decided to take a step back from Hyperloop One. We appreciate everything that he has done to put us on the path to creating the world’s first Hyperloop.”

This wouldn’t be the first instance of executive shuffling in the company’s short history. As the story goes, Hyperloop One — formerly Hyperloop Technologies — came out of a conversation Shervin Pishevar had with Musk. Pishevar, who recounted this story during an onstage interview with Jason Calacanis, said Musk mentioned the idea but said he was too busy with SpaceX. So in 2014, Pishevar took on the challenge of creating this new technology but specifically has his eye on transporting cargo. BamBrogan, an early member of SpaceX, later joined Pishevar and served as the interim CEO at the company until 2015 when Hyperloop One brought on ex-Cisco president Rob Lloyd to fill that role on a permanent basis.

But this apparent shake-up is much more sudden and far-reaching. Archived images of the company’s site show that as of June 16, Afshin Pishevar was still the chief legal counsel and Pendergast was also still in his role. Pendergast’s LinkedIn profile had also been updated as of early this week to include he was no longer at the company.

Today, the site had been changed to not only include Giegel’s promotion and former CTO BamBrogan departure — both of whom formerly worked at SpaceX — but also a promotion for Marvin Ammori. Ammori was hired by Afshin Pishevar as the assistant general counsel on June 8. Ammori is now listed as the general counsel.

In an article reporting Ammori’s hiring at Hyperloop, Afshin said the company was still looking to hire more attorneys and that Ammori would be in charge of collaborating with federal and local governments to help come up with regulations for this new type of transportation.

You can contact this reporter with more information at johana@recode.net or on Confide or Telegram at (516) 233-8877.