Is the guard changing? Is that the plan? Is this a dream? Is there a guard? 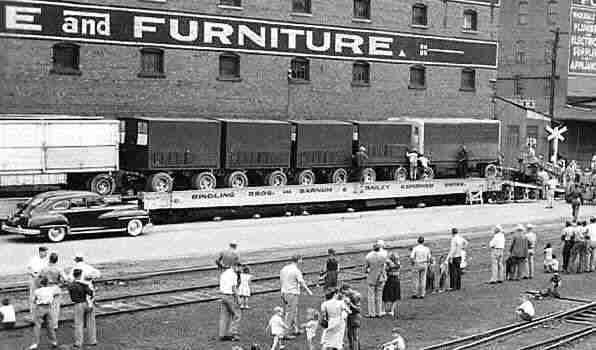 June 25 – July 1 BLUE UNIT Train-Run from Ellenton, Florida to Fresno, California (7 days). THIS WILL BE THE LONGEST SINGLE MOVE OF ANY CIRCUS IN HISTORY. Time-frame calls for the load-out to begin early on Friday, June 24. The flats are to move from Ellenton to join the coaches between Ellenton and Tampa, then they are to move out as a “Unit Train” (Circus Train) upon putting those two sections together. Since posting this thread on Thursday, June 23, the “chosen” route has been confirmed by someone with the internet moniker “rrw” and also from a host of BNSF personnel who were scratching their collective heads over yesterday’s conundrum over the possible route choices west of New Orleans (UP or BNSF): After going west out of Florida on CSXT to New Orleans, BNSF will take over from there, and all the way to destination: through Houston-Temple-Sweetwater-Clovis-Belen-Winslow-Needles-Barstow-Bakersfield-Fresno, with a run over TEHACHAPI LOOP on the final day of the run.

And while construction of the “Hyperloop” itself is still in the startup phase, both current and former students at UCLA’s IDEAS campus have already envisioned what the Hyperloop travel experience would be like.

“We were just looking at the data of Elon’s white paper and expanding it, taking it to the next level,” explained former UCLA graduate student Matt Whitham. “How big would a Hyperloop station have to be? What would the interior of the capsule look like? How to design it? Would you be able to stand up inside of the capsule while going 760 miles an hour?”

The idea is that passengers would ride inside capsules, at tremendously high speeds, in pneumatic tubes. A cross-continent trip that today takes days could be completed in mere hours.

And, as Full Frame Contributor Sandra Hughes found out, reinventing the way we all travel is no small challenge. 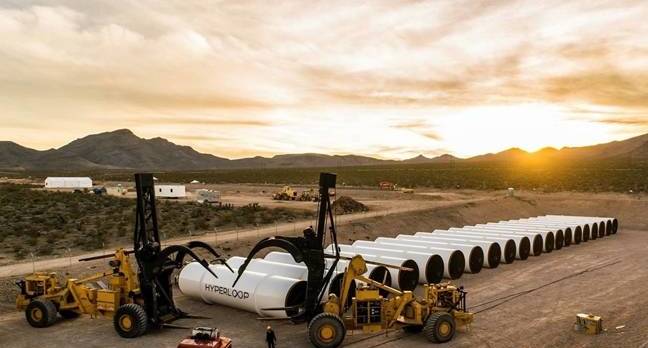 Russia has confidently tapped into hyperloop train technology for moving both freight and passengers at speeds of up to 1,200 kph. Russian Railways and Hyperloop One are exploring together the possibility of using the futuristic technology. General Electric and SNCF could join Russia’s Hyperloop pilot project as investors, declared the CEO of the Russian Direct Investment Fund (RDIF), Kirill Dmitriev (TASS).

“We’re now discussing with Russian Railways first pilot projects and therefore will hopefully be testing them in the nearest future in Russia as well, and such major investors as General Electric and SCNF, the leading industrial companies, are putting their faith in the project and obviously we hope it will be successful in Russia as well,” he said.

Hyperloop One, the Russian group of companies Summa (owner of Fesco, one of the largest Russian shipowners and operators of port infrastructure with integrated rail and logistics operations), and Moscow Government have signed an agreement to explore building Hyperloop One systems in Russia’s capital region. The deal was signed at the St. Petersburg Economic Forum by Moscow mayor Sergey Sobyanin, Summa Group chairman Ziyavudin Magomedov and Hyperloop One chairman and co-founder Shervin Pishevar. According to Hyperloop One, discussions with Russia’s federal government are underway for a second feasibility study, with an agreement expected later this year.

“Our longer term vision is to work with Russia to implement a transformative new Silk Road: a cargo Hyperloop that whisks freight containers from China to Europe in a day,” Pishevar stated.

Russian Transport Minister Maksim Sokolov said that the Russian government proposed Primorye-2 transportation corridor as the pilot stage for hyperloop. The 70 km long corridor connects the ports in the southwest of Primorye – Posiet, Zarubino and Slavyanka – with China’s northeastern provinces. According to him, China has also expressed interest to co-fund the project. “We have a fund to support the Silk Road projects. I believe that this project may count on 100% co-financing from this fund,” he said.

RDIF also announced yesterday that it made investments in Hyperloop One. RDIF committed funds to the company during the Series B financing round, which closed in April 2016. A number of leading international investors participated in this round alongside RDIF. Among them are: Sherpa Ventures, Formation 8, ZhenFund, Caspian Venture Partners, 137 Ventures, Khosla Ventures, Fast Digital, Western Technology Investment (WTI), GE Ventures, as well as SNCF.

“RDIF pays great attention to the development of transport infrastructure, including the technological advances that will shape the future of the transport industry. Our investment in Hyperloop One project will facilitate the arrival of cutting-edge technologies in Russia. RDIF and its international partners will provide support to the project not only in Russia but also in the Middle Eastern and Asian markets.”