We often are caught in between in our lives, whether it is from one friend to another or an over caring relative asking when are you going to get married for the ample time or your mother asking you how is work. Unless you are going to dump all the work troubles like how your boss bullies you, your tea mates are shunning you because you are dating someone from the rival team and you just accidentally deleted an important file from your company’s data server, hoping no one will find out… All on your mother’s lap.

No? Then you probably going to lie to your mother when you say “Everything’s fine at work, Ma. Oh, nothing beat your meatloaf! Can I have some to bring home?” This is a white lie. You do it because you don’t want your mother to worry about you and also you don’t want…

PortMiami has welcomed the start of the Lone Star Express with the arrival of the 5,000 teu container vessel Maersk Danang.

The Lone Star Express is part of a recently launched service between Asia and US Gulf and East Coast, which includes a weekly rotation at PortMiami. The service is part of the 2M Alliance, comprising Maersk Line and MSC.

PortMiami has been steadily capturing new trade and in fiscal year 2015 it posted its strongest container traffic in over a decade with a total of 1,007,800 teu. Additionally, Miami has been ranked among the fastest-growing seaports in the nation by trade industry experts.

“We welcome the Maersk Danang to PortMiami, and thank the 2M Alliance for their confidence in the port team,” said port director and CEO Juan Kuryla. “The new Lone Star Express service is a major enhancement to the port’s cargo offerings between Asia and US Gulf and East Coast.”

PortMiami officials attribute the continued growth to more than US$1 billion of completed capital infrastructure projects. Miami has the deepest shipping channel in the Southeast US at -50/-52 ft (-15.24/-15.85 m) and is the only seaport south of Virginia capable of handling neo-Panamax vessels.

In addition, officials stated that Miami offers its users a fast access tunnel connecting the port directly to the US Interstate Highway System as well as the Florida East Coast Railway on-dock intermodal rail service, which provides rapid turnaround time for the movement of both import and export goods while delivering a seamless network reaching 70% of the US market within four days.

Today is a first for me! Normally my major “product lines” do not clash with each other. But today we have NY Metropolitan Transportation Authority clashing with some of the folks involved with HYPERLOOP.

Who wants to climb into this bowel bobbing in the river? With the likely L train shutdown looming in 2019—affecting 250,000 people who commute between Manhattan and Brooklyn daily—it’s time to look at possible solutions. One solution is turning parts of 14th Street into a bus, bicycle, and pedestrian only zone. And then, there’s this:

“Imagine a giant condom,” says Gonzalez Cruz from AECOM, LA’s infrastructure design mega-firm which does work for NASA and has partnered with Elon Musk for the Hyperloop project. Last weekend, among variedly reasonable ideas for the pending L train shutdown proposed at the Van Alen Institute in Manhattan, AECOM came up with the “L Transporter.” It’s basically a 2,400-foot fiberglass-fabric tunnel “immersed” in the East River that would let people walk and bike over, under, over and under the water.

Parts of the tunnel would bob above the surface while other segments could be anchored to the river floor, allowing for boat traffic to pass above it, they said. They also envisioned projecting images onto the tunnel’s interior walls in order, “to provide a cross between art and technology for New Yorkers,” Cruz said.

Finally! Someone providing a cross between art and technology for New Yorkers. Surely, “projecting images” would make the experience of crowds shuffling through a constipated wobbly underwater intestine less of a nightmare.

The project, being financially unrealistic, did not win the $1,000 contest prize or get an honorable mention.

What’s longer than a football field, made by General Motors but rarer than a Bugatti, and lives an unloved life in middle America? The GM Aerotrain. While we only get fleeting glimpses at concept cars from the American auto giant before most of them are whisked away to the Heritage Collection warehouse, two concept trains from the 1950s are substantially more accessible.

The streamlined Art Deco fantasy on rails could almost be accused of luring customers back to trains with sex appeal. This seems particularly odd because the Aerotrain was a product of General Motors, the company that actively pushed trolley traffic out of cities so people would buy their cars.

In the mid-1950s, GM’s Electro-Motive Division was responsible for producing train engines, and the locomotive business was shrinking thanks to the effectiveness of automotive travel. This was an era when GM’s industrial might seemed like it could solve any problem, and so they decided to save train travel by utilizing existing manufacturing.

The rail cars were an evolution of the company’s aluminum bus bodies; the motor was an established 1,200 horsepower 12-cylinder diesel powerplant; and all of this would be wrapped around a style coming from the mind of Chuck Jordan. Yes, the same man who had a hand in the outrageous tailfins of the 50s Cadillacs and the Lumina MPV of the 80s (this Aerotrain kinda looks like their love child, eh?)

This all seemed like a good idea. GM’s economies of scale would keep production and operating costs down in many new ways. The lightweight cars combined with the streamlined locomotive would provide was advertised with, “sustained speeds of 100 miles an hour.” Plus, the futuristic design would be too attractive to resist getting on board.

But the project seemed to come off the rails almost immediately.

Two of these LW12 locomotives (later given the Aerotrain name to increase exposure) went into service in 1956. The locomotive was excelling at high-speed service, but it didn’t have enough grunt to get up big hills. Passengers were not happy because the bus-inspired air ride suspension on the lightweight train cars bounced them around for a rough ride. Both were returned to General Motors within a year. After trying out different routes with no success, both Aerotrains were quietly put into service as low-speed commuter rail in Chicago. The project that was supposed to be the savior of passenger rail service turned into a last gasp for railroad innovation.

While the Aerotrain can be considered a failure that left the track a half-century ago, they have a lasting allure. Both are still on public display today. One is in Green Bay, Wisconsin, and the one seen here is the first LW12 that entered service. It’s forever parked at the Museum of Transportation in St. Louis.

The Aerotrain seems to have a fitting home here because the multi-building facility celebrates both trains and automobiles. But GM’s Aerotrain has a lonely spot next to a maintenance barn. In a bit of irony the train that had trouble with the hills is now sitting at the bottom of one. It’s out of sight from a large collection of its larger siblings who sit at the top as both a metaphorical and actual symbol of their greater success.

It might feel like a sad story, but it really isn’t. This is spring time and the weather is perfect to walk through the new green grass that is growing around this shiny steel relic. It’s under-appreciated history, so there’s no rope to keep you from getting close or crowd to block your view. So if you’re driving through the Midwest, skip the World’s Largest Ball of Twine and see the World’s Longest Tailfin instead.

3 January – Greg “Pappy” Boyington commanded 46 fighters, flying from Ondonga, to Rabaul.  Several needed to abort due to mechanical failure.  From 20-24,000′ they dove to intercept 27 Zeros of the 253 Kokutai, while they were already confronted with 27 Zeros of the 204 Kokutai.  Boyington’s F4U 17915 and his wingman F4U 02723 were shot down and both men were listed as missing.

4 January – the ‘Snooper Squadron’ of the 13th Air Force flew their first mission. Fifteen B-24’s, escorted by 70 or more P-38’s and US Navy F6F’s bombed Lakunai Airfield, near Rabaul, on New Britain.  The enemy sent 80-90 fighters to intercept.  The US claimed 20 enemy aircraft downed and lost one B-24 and 2 damaged.  Twelve other aircraft supported ground troops on Bougainville.

An exuberant, optimistic look at the future, that’s how Downbeat Magazine introduced a  fantastic list of musicians for the future in its JULY issue.

Sullivan Fortner was a total stranger to me, not anymore – listening to his playing was enough to be alert in the future! 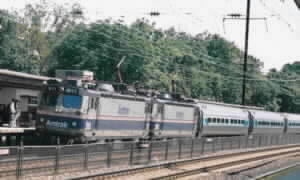 Amtrak will retire its fleet of 54 AEM-7 electric locomotives that run along the Northeast Corridor.

The units have been in operation for 37 years and have traveled more than 220 million miles, Amtrak official said in a press release. The locomotives will be replaced by the next generation ACS-64 locomotives.

“Together with the Acela Express, AEM-7s have built on the legacies of the Pennsylvania and New York, New Haven and Hartford railroads as the Northeast Corridor has expanded into the 21st century,” Amtrak officials said.

On June 18, Amtrak will mark the locomotives’ retirement with an “excursion trip” available to the public.