The testing allowed STM to validate and adjust the performance of several systems with passengers on board, such as ventilation in automatic mode or the volume of audio messages. The first AZUR train traveled more than 14,000 miles with customers aboard since it debuted on the Orange Line in February.

Another train will continue to be operated without transit users. That train will perform necessary qualification tests on the system’s other lines.

By 2018, a total of 52 nine-car trains will be operational in STM’s subway system, agency officials said in a press release.

“This is very good news for Montrealers, as AZUR will help improve the transit experience for customers who choose public transportation,” said STM Chairman Philippe Schnobb.

So, my spice took me to New York last week to see Jessica Lange performing with an ensemble cast to die for [or drool over, depending on your bent] in Eugene O’Neill’s Long Day’s Journey Into Night. A magnificent four-hour free-fall  into the unpalatable bowels of addiction, depression and blame. It was wonderful! You can check out the theater and the rest of the available performances here.

Here are some things this native Texian learned while on her first official trip to  New York.

Throughout the next months jazz festivals pop out by the dozen. Let’s check some of them one by one!

Via Rail will ask the federal government by year’s end to climb aboard a plan to run new “high-frequency,” electric-hybrid trains in the busy Windsor-Quebec City corridor, says the head of the Crown corporation.

With any luck, the $4-billion project will be “shovel ready” a year from now, with the first of the new fleet carrying passengers by 2019, says Via president and CEO Yves Desjardins-Siciliano.

“The fall of 2019, the dedicated corridor would exist between Montreal, Ottawa and Toronto at a minimum and even possibly all the way to Quebec City at that point,” he predicted in an interview with The Canadian Press.

Via has been promoting its plan to build tracks dedicated to passenger rail service since 2014, just five years after its proposal for a high-speed service withered under the weight of the recession.

But the proposal was recently refined to focus on building electrified tracks after Justin Trudeau was elected with a Liberal government committed to spend massively on infrastructure projects.

The plan, which would involve private funding, falls in line with the federal Liberal government’s stated desire to construct “green” infrastructure, said Desjardins-Siciliano.

“There’s a perfect alignment between this government’s desire to have generational, transformative projects that are a step-change in Canada’s modernization, with this project,” he said.

Yves Desjardins-Siciliano took over as the new head of Via Rail, on a five-year term, on May 11, 2014. (Via Rail handout photo)

It also fits with a report to Parliament in February which called for “private-sector approaches” to improving both passenger and freight rail services in Canada.

Via has been openly courting public-sector pension funds eager to invest in long-term, stable projects, to gauge interest in its plan, until it gets the green light from Ottawa to formally solicit partners.

Private-sector investment could come in the form of a public-private partnership to help offset the costs of construction, or an equity investment.

Desjardins-Siciliano said he has had discussions with the Canada Pension Plan Investment Board, the Ontario Teachers’ Pension Plan and the Ontario Municipal Employees Retirement System among others.

The “high-frequency” aspect of Via’s proposal appears out of sync with the Ontario government’s appetite for faster train service.

In October, the province appointed former federal cabinet minister David Collenette as a special adviser on “high-speed” rail, with a mandate to make a business case for building a rail link from Windsor through communities in southwestern Ontario to Toronto.

Desjardins-Siciliano’s plan envisions the construction of dedicated passenger rail lines for trains that would travel at an average speed of 110 kilometres an hour, initially along a corridor from Toronto to Montreal, with stops in several communities along the way.

Until 2009, Via had promoted a lofty plan to construct a high-speed rail service for the Windsor-Quebec City corridor.

But that plan no longer makes either economical or practical sense, said Desjardins-Siciliano, who sees Via competing with passenger cars rather than airlines to get people from city to city.

In competition with low-cost airlines

He cites Europe as an example of where high-speed trains are readily available, but not in high use, because they are not as economical as flying and don’t make frequent stops.

“Less than 10 per cent of rail travellers (in Europe) travel by high-speed train,” Desjardins-Siciliano explained.

“Why? Because conventional speed rail stops every 50 to 100 kilometres and therefore is an alternative to the car,” he said.

“(And) a high-speed train ticket is more expensive than a plane ticket because of low-cost airlines.”

CN Rail, which owns much of the tracks currently carrying Via passengers, said it is ready to discuss any plan that would open its rail lines to more freight traffic.

Last month’s federal budget set aside $3.3 million over three years to study the viability of Via’s dedicated rail line proposal, but made no commitments to pay for the construction itself.

The Railway Association of Canada predicted the plan would relieve congestion on highways in the Toronto-Ottawa-Montreal corridor, and reduce passenger travel times between the cities.

3D printers are available to everyone with even a small budget. That means that even though what they produce may not be up to the quality level you would manufacture or sell yourself, the ability to directly control, modify, and create items is moving to consumers. And they are taking advantage of these small printers matched with predefined designs and low cost design services.

Will this trend replace the supply chain as we know it? Not immediately, and certainly not completely. Certainly the ability to print single quantities of custom or hard to find items on demand and inexpensively will take over some segment of the manufacturing and order delivery process in the short term. It’s the longer term impact of on-demand manufacturing that will have the biggest impact for manufacturers and retailers.

Target, another one of the country’s largest retailers, just followed Walmart’s lead by raising wages to $10 an hour. According to Reuters:

“Target Corp has started raising employee wages to a minimum of $10 an hour, its second hike in a year, pressured by a competitive job market and labor groups calling for higher wages at retail chains, sources said.  …The $1-per-hour raise marks the second time Target has followed Wal-Mart Stores Inc in raising base wages.”

Thanks to all of us, hundreds of thousands of Target workers will now have more money in their pockets to take care of their families.
Will you spread the word about this incredible victory by sharing this graphic on Facebook? 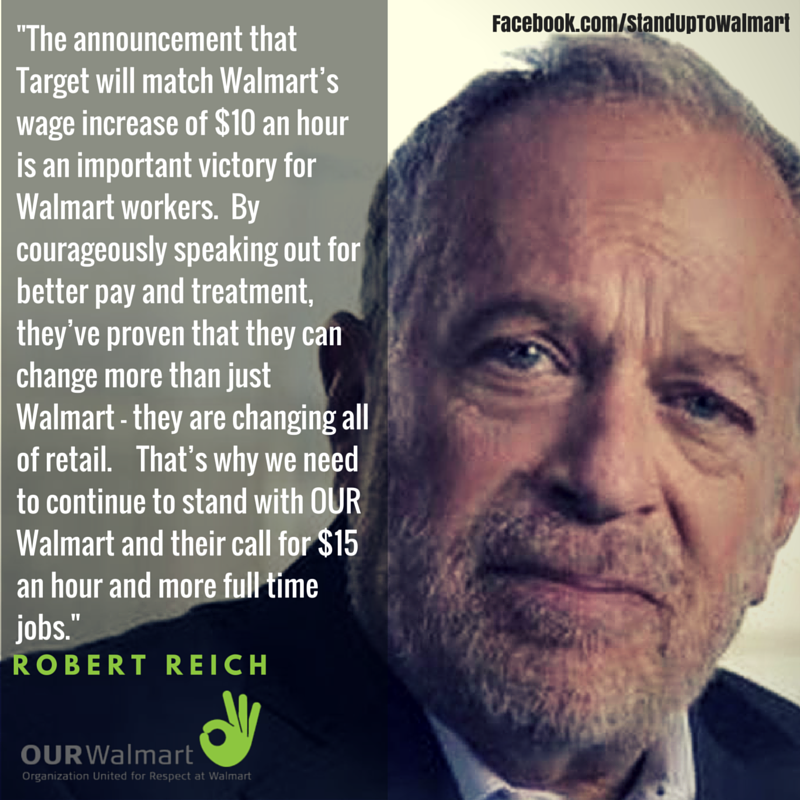 We showed that we could move the largest company in the world to raise wages when no one else thought we could. It showed that anything is possible if we stand together and we’ll keep standing up until ALL associates receive a REAL raise and $15 an hour with full-time schedules.

Since we started standing up through OUR Walmart and joined our efforts with other organizations like the Fight for $15, millions of workers have received raises and are making more than the federal minimum wage of $7.25 an hour. These incredible raises would not have happened without us. When we change Walmart, other retailers follow and we improve the lives of workers everywhere across the country.

This is why I will always stand up with the thousands of other associates fighting to change Walmart.

Let’s spread the word about the Target victory and encourage others to join the fight. Share this graphic now.