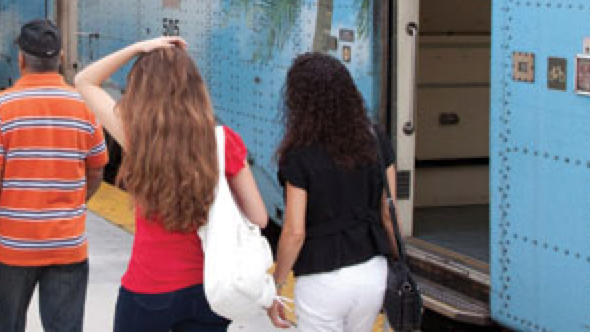 The operators of Tri-Rail overcame some obstacles at the state level and finalized their plans for a downtown Miami passenger rail station.

The passenger line, which currently runs from near West Palm Beach to Miami International Airport, would share the downtown Miami station of the All Aboard Florida/Brightline passenger rail starting in 2017. Right now, Tri-Rail passengers must transfer to the Metrorail line in Hialeah to reach downtown.

“I would like to thank the South Florida Regional Transportation Authority (SFRTA) Board for their unanimous approval of a plan to allow for the completion of the commuter rail platforms at the All Aboard Miami Central station, which is a major component of this Tri-Rail project,” Miami-Dade County Mayor Carlos Gimenez said. “This collaborative partnership with the SFRTA, the City of Miami, the Downtown Development Authority and others, will also serve as a model for increasing mobility and transportation options for Miami-Dade’s 2.7 million residents and millions of visitors.”

The $68.9 million needed to build a Tri-Rail platform at the AAF station already under construction was pledged by Miami-Dade County, the City of Miami, the Omni Community Redevelopment Agency, the Overtown Park/West CRA and the SFRTA. Since it wasn’t able to secure state funds or legal immunity against rail accidents on the tracks this year, SFRTA agreed to borrow $20 million to make up the different and to set aside money in case of lawsuits.

Creating a link between the Tri-Rail’s CSX tracks and the Florida East Coast Railway line that Brightline will utilize opens up the possibly of extending Tri-Rail service up the FEC line – the Coastal Line plan long promoted by SFRTA. That would require additional funding and new stations to be constructed along the FEC line.

By 2017, the Brightline train will carry passengers between downtown Miami, Fort Lauderdale and West Palm Beach. Eventually, Orlando will be added to that service.

One thought on “Tri-Rail finalizes plans for downtown Miami station”