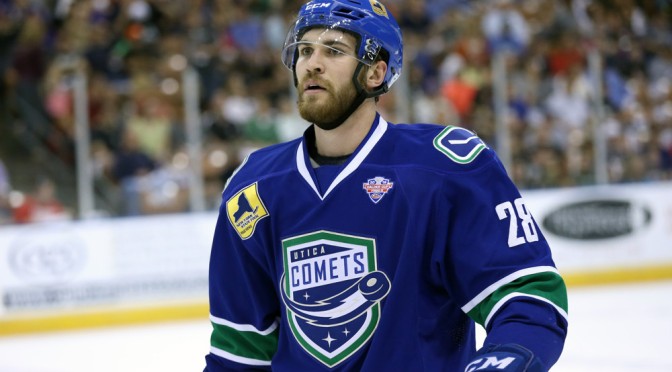 The Utica Comets season has been pushed to its furthest possible point after a 5-1 loss to the Albany Devils on Saturday evening at the Times Union Center. The Devils four goal third period was sparked by a controversial short-handed goal that came after Comets goaltender Richard Bachman was knocked to the ice on what appeared to have been a goaltender’s interference.

Cole Cassels (1-0-1) and Michael Pereira (0-1-1) each picked up their first career Calder Cup Playoff points on the Comets lone goal of the game. The Comets have now lost back-to-back playoff games for the second time in franchise history, with the first time coming during Games 1 and 2 of the 2015 Calder Cup Finals.

Cassels got the Comets off to a roaring start when he found the back of the net halfway through the first period. After the line of Michael Pereira, Brandon Marino, and Cassels applied heavy offensive pressure, Cassels sniped a wrist shot over Wedgewood’s glove to give the Comets their first lead of the series.

The lead did not last long as the Devils scored their first of five unanswered goals seven minutes later when Ben Thomson banked a shot in off of Bachman’s leg pad.

The Devils kicked off their four goal second period with a power-play goal four minutes in.

Then the game spiraled out of control and away from the Comets.

While short-handed, the Devils hemmed the Comets into their own zone as they looked to set-up the breakout. Jim O’Brien kicked the skate out from under Bachman, and sent the goaltender sprawling out on his stomach. The puck squirted from behind the net and into the slot, where Reid Boucher jammed the puck in to the net before Bachman could recover his position in the crease. The referees conferenced for a short amount of time, and deemed the goal a good goal.

On the ensuing face-off, the Comets rushed Wedgewood and picked up the lone penalty after a scrum on the ice. With Ehrhardt in the box for an Unsportsmanlike Conduct minor, the Devils scored 40 seconds after their previous goal to extend their lead to 4-1.

An extra insurance goal in the second period’s waning minutes was the final insurance goal the Devils would get on their way to grabbing a 2-0 series lead.

The series now shifts to Utica for Game 3 at the Utica Memorial Auditorium. It’s do or die for the Comets, as Albany just needs one more win the claim in the series. Puck drop is scheduled for 7 pm, where Comets fans are being asked to wear white and WHITEout TheAUD.

One thought on “Game 2: Comets Fall Into 0-2 Series Hole”