M-1 Rail and Quicken Loans late last week announced that QLINE has been selected as the official name of Detroit’s streetcar line.

A mockup of a ticket for QLINE
Source: Quicken Loans

The two organizations also unveiled the QLINE logo, which features a stylized “Q” that “symbolizes the connectivity accomplished through the rail line,” M-1 Rail official said in a press release.

In May 2015, Detroit-based Quicken Loans received naming rights as a result of its financial support during the project’s fundraising period. In addition, the company is one of 20 station sponsors along the route.

“The launch of this modern streetcar marks a monumental moment in the development of Detroit in the 21st Century,” said Quicken Loans President and Chief Marketing Officer Jay Farner. “Quicken Loans is proud to play our part in the beginning stages of modernizing the transit system in our burgeoning urban core.”

The 3.3-mile route will run from Congress Street in downtown Detroit to West Grand Boulevard. Construction began in 2014 and is slated for completion by the end of this year.

The first modern streetcar vehicle is expected to be delivered during the fourth quarter. Each car will travel up to 35 mph

The Federal Railroad Administration (FRA) on Wednesday will hold an open house to review draft project elements for the expansion of Union Station in Washington, D.C.

The project elements include rail infrastructure, public concourses, parking, bus and taxi facilities, retail and public open spaces, according to a notice posted on the FRA website.

The agency is seeking public input as it prepares a draft environmental impact statement (EIS). The EIS review process will wrap up with a record of decision from the FRA and a conceptual design for the expansion project.

The Union Station Redevelopment Corp. and Amtrak are proposing to expand and modernize Union Station to support current and future rail service and operational needs.

No, the picture at the top (from KINGLYHEIRS) is way back when it opened 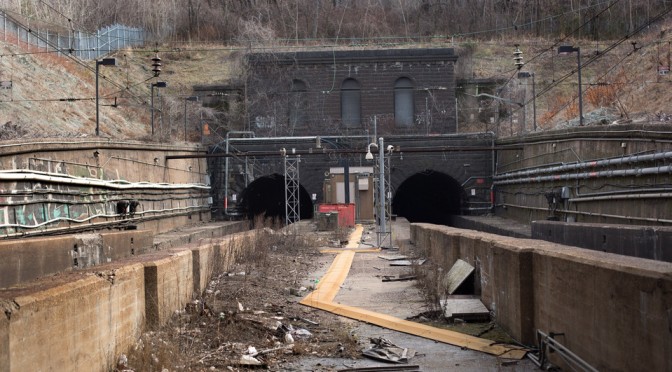 The project to build a new rail tunnel under the Hudson River will receive $70 million in funding for critical preliminary engineering work, with $35 million in federal funding coming from Amtrak and $35 million from the Port Authority of New York and New Jersey (PANYNJ), according to a PANYNJ press release.

The existing Amtrak Hudson tunnels, which Amtrak and New Jersey Transit trains use to transport riders between New Jersey and Manhattan, are more than 100 years old and are deteriorating. Their deteriorating condition was further damaged by Hurricane Sandy in 2012.

U.S. Transportation Secretary Anthony Foxx also announced that the department will commit the necessary resources and take steps to accelerate federal environmental reviews and permitting for the project. The project has been included in the President’s Federal Infrastructure Projects Dashboard, which means it should receive a “swift and thorough” environmental review process, PANYNJ officials said.

NJ Transit has issued a formal notice-to-proceed for consulting services, which will be funded by Amtrak and NJ Transit.

In addition, PANYNJ, Amtrak, the U.S. Department of Transportation and NJ Transit have agreed to enter into a memorandum of understanding that will result in a framework for coordination among the various parties to advance Gateway. This includes the creation of an executive committee that would coordinate activities and working groups focused on environmental permitting, construction and preliminary engineering, funding and financing, rail operations and governance matters for the project.

The local agencies have announced their intent to apply for competitive federal grants in the coming months to advance Gateway, which also includes the Portal Bridge replacement project in New Jersey and the completion of the Hudson Yards right-of-way preservation project in Manhattan.

FORT PIERCE — Construction is completed at the plant that will supply railroad ties for All Aboard Florida’s Brightline train service.

Access to the grand opening is by invite only. Starting at 11 a.m., attendees can tour the 16,280-square-foot facility, where ties will be built for the $3.1 billion high-speed passenger railroad that would run between Miami and Orlando.

Rocla — of Lakewood, Colorado — is leasing the property from Florida East Coast Railway, a sister company of All Aboard Florida.

FEC trains would haul limestone from Miami-Dade County and granite from Georgia to the plant to mix with concrete to build the cross ties. Fort Pierce was chosen because it is halfway between Jacksonville and Miami, Robert Ledoux, FEC general counsel, told the Planning Board in June.

The concrete ties also will be sold to the Tri-Rail, CSX and Norfolk Southern railroads, officials have said.

The plant, which would be the first financial benefit the rail project provides to the Treasure Coast, would employ 42 full-time workers, earning an average annual wage of $44,000 plus benefits, the city said. It also would generate about $250,000 a year in city property taxes, according to the city, and $121.4 million and 392 jobs in Indian River County.

By Center for Biological Diversity

The Food and Drug Administration (FDA) will begin testing food for glyphosate, the world’s most commonly used pesticide, according to Civil Eats. This marks the first time that a U.S. agency will routinely test for glyphosate residue in food. It comes after the Government Accountability Office released a report condemning the FDA for failing even to disclose its failure to test for glyphosate in its annual pesticide residue report.

Just last week 35 members of the U.S. House of Representatives sent a letter to U.S. Environmental Protection Agency (EPA) Administrator Gina McCarthy expressing concerns regarding the potential negative health and environmental impacts of a pesticide, Enlist Duo, that combines glyphosate and 2,4-D. EPA is currently reanalyzing its decision to register the dangerous pesticide following a remand order from the 9th Circuit Court of Appeals.

Bernie Sanders failed to impress major media outlets over the weekend as he barely managed to win seventy per cent of the vote in three western primaries.

The major cable networks briefly mentioned Sanders’s vote tallies in Washington, Alaska, and Hawaii but noted that he ran out of steam well shy of eighty per cent.

“There’s no point in sugarcoating it,” one analyst put it. “Rough night for Sanders.”

According to one cable executive, Sanders needs to “put up some big numbers fast” if he expects the networks to continue giving his campaign airtime.

“It’s going to be harder and harder to justify covering him while he’s stuck down in the seventy-per-cent range,” the executive said.

While Sanders campaign officials remain optimistic about the upcoming primary in Wisconsin, media outlets are calling it a “do or die” state after his sputtering finishes over the weekend.

“I think if he limps across the finish line with, say, seventy-five or seventy-nine per cent, it’s going to be time for him to reassess things,” one cable representative said. “That would have to be a wake-up call.”

A spokesperson for CNN could not be reached for comment, as the network was busy preparing a ninety-minute special on the birth of Donald Trump’s new grandchild.

By Andy Borowitz, The New Yorker

The article below is satire. Andy Borowitz is an American comedian and New York Times-bestselling author who satirizes the news for his column, “The Borowitz Report.”

I’ve harped on the use of big data in the supply chain a few times already. In fact, historically one of the issues with the supply chain in general and EDI specifically is the amount of data generated by the plethora of transactions moving between trading partners. And as the demands for visibility increase so does the number and complexity of the documents.
A couple years ago I looked into some issues a large retail supplier had with some of their processing. One of my recommendations was to increase the amount of historical data they were storing so that they would be able to look backwards in time to the actual documents that were being questioned by their customers. At the time they were only maintaining a 90 day history. That meant any disputes regarding transactions older than 3 months became difficult or impossible to respond to in any meaningful way.

That recommendation was made during a time when storage space was becoming significantly less expensive, but before the concept of big data had really taken hold as a standard – or at least a reasonable option for data retention.

I came across a report from McKinsey & Company that discussed the concept of big data and a study they had performed. The report dates back to 2011 and covers 5 domains. One sector they studied was “retail in the United States.” Even at that time (before many new tools and storage techniques, not to mention cost reductions) the report indicated, “Big data can generate value in each [sector]. For example, a retailer using big data to the full could increase its operating margin by more than 60 percent.”

Drones aren’t just good for taking arial pictures of your neighborhood or accidentally crashing into trees. They can be used to inspect rural railroad bridges as well as monitor air quality, too.

Edward R. Hamberger, President and CEO of the Association of American Railroads, said Wednesday morning during a State of the Industry call that BNSF Railway, the country’s second largest railroad, is working with the Federal Aviation Administration on drone pilot program.

The program called the “Pathfinder Program” uses drones to remotely inspect track, bridge and other freight rail infrastructures as well as monitor the quality of air in and around railroad lines.

The program is for more than modernizing a transportation industry that to many in the public looks virtually archaic. Drones can provide meaningful support in the safety of railroads.

“Soon, a drone flying at 500 feet may be able to spot a quarter-inch separation in a rail line even at night and in poor weather conditions.” read the railroad 2016 State of the Industry report.

BNSF is one of three American companies, including CNN and PrecisionHawk, working with the FAA in public-private partnership to research safe drone operation.

Though Hamberger admitted the use of drones is very promising for the rail industry, there are many questions that need to be answered before drones become a regular part of the railroad safety infrastructure.

“Does it in fact allow over the line of sight inspection of bridges? How will that work?” Hamberger rhetorically asked during the call.

While questions still need to be answered, it’s clear drones will likely play a role in the future of rail. After all, they can safely inspect parts of the freight rail lines where temperatures can drop well below zero during the dead of winter.