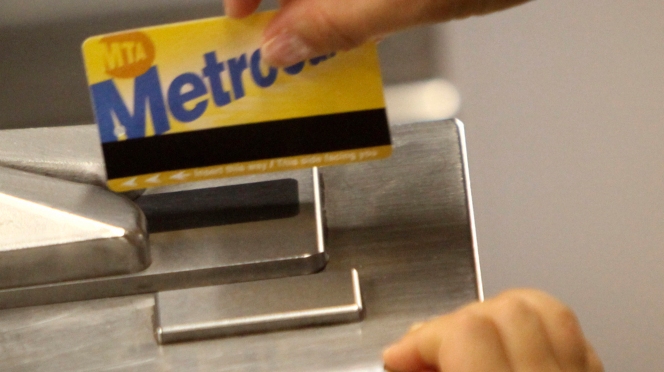 New Yorkers are hit with an “invisible fare” of $130 a month in taxes, fees and subsidies for the MTA, the city comptroller charged Monday.

This ranges from sales and payroll taxes to 50-cent fees on yellow cabs — as well as the money the NYPD spends policing the subway, according to the new analysis.

“This invisible fare is equivalent to every New York City household paying 130 bucks a month,” said Comptroller Scott Stringer. “That’s more than the cost of the monthly MetroCard before we even stand on a subway platform or pay a bridge toll.”

Residents and businesses chip in over $10 billion a year to the MTA’s coffers — with $5.3 billion coming from MetroCard purchases and tolls, the report said.

The remaining $4.8 billion includes eight taxes, four fees and nine subsidies. They include a payroll tax and a subsidy for private bus routes the MTA has taken over.

The city also directly budgets money for the MTA — including over $300 million a year for transit cops. Other sources of funding include expanding select bus service in Queens, The Bronx and Staten Island.

Stringer said he isn’t calling for the MTA to get less money but that Albany and the feds shouldn’t leave the city holding the bag.

The MTA is a state agency, but the analysis found it was only given about $603 million by Albany in the 2014 fiscal year. “It is a hypocrisy that city residents have lived with for years. It makes no sense,” said Stringer.

The MTA is currently facing a $14 billion gap in its five-year capital plan. More than half of it is devoted to the city’s subway.

Chairman Thomas Prendergast sent a letter to Mayor de Blasio on May 4 asking for a $1 billion investment in the Second Avenue Subway over five years.

The first phase will open on the Upper East Side in December next year, but the MTA wants to expand the new line to East Harlem. Prendergast also asked for $1.5 billion for repairs and maintenance for the city’s transit system.

An MTA spokesperson blasted back at Stringer’s comments.

“It is incredible that the comptroller acknowledges in the very first paragraph of his report that ‘the MTA needs more funding from every level of government’ but uses fuzzy math to justify letting the city off the hook for using some of its billion in future surpluses to pay its fair share for mass transit,” said MTA spokesman Kevin Ortiz.