The U.S. Department of Transportation (USDOT) has launched an initiative to create a “national transit map” that will display stops, routes and schedules for all participating U.S. transit agencies.

The department is asking transit agencies to voluntarily permit the collection of “general transit feed specification data” from their websites on a periodic basis, which will allow the incorporation of routing and schedule data into the transit map, USDOT officials said in a press release.

This kind of data defines a common format for public transportation schedules and associated geographic information, according to Google’s Developer page.

With that information, USDOT, planning agencies and researchers will be able to identify and address gaps in access to public transportation. To participate in the national transit map, transit agencies must register their data with the department’s Bureau of Transportation Statistics (BTS) and agree to standard terms of use.

The first “collection day” for the transit map will be March 31, when BTS will download and begin processing agencies’ registered datasets.

To develop the method for collecting, storing and publishing the map, BTS  worked with the USDOT’s chief information officer and office of transportation policy, as well the Federal Transit Administration.

Well, the big “enchilada” for them is pictured at the top of the page.

I’m sure they could handle Baltimore 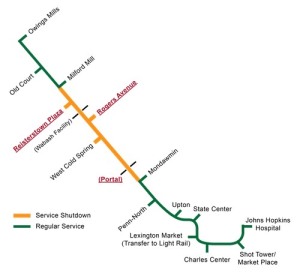 But they are assembling all sorts of “horses” (even Google) to work on this, so let’s see how they do.

A dynamic interactive real time map of all local, regional, intra-state, inter-state, national and North American public surface transportation systems may be a web site that is self-supporting with advertising. The data matrix could be routes, fares, transport unit features and limitations, real time schedule up dates, etc, a single source for North America of all public surface transit. Finally, the site could be used to collect data from users as to opportunities for the alterations/ expansion of systems to accomplish such things as adding nodes to connect local, regional or inter-state systems to each other. I certainly believe the for-profit long haul passenger carriers would support a system that would ehance the conveyance of ridership to their transport nodes.

Years ago I had an elderly friend who once a week made a round trip from Richmond, CA to Menlo Park, CA around SF Bay on only local buses involving 11 tranfers each way. I met her at the local stop in Richmond a little after midnite on her return trip to give her a ride home as she fell asleep in the passenger’s seat. Her experience caused me to fantasize about public transportation being so well developed in the US that I could access every community of a population of 1,000 or more in the lower 48 at least once per week by either bus or train.