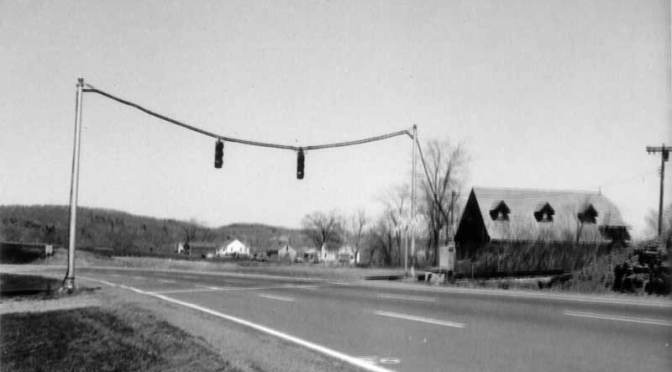 The branch line of the New York Central Railroad (referred to as the Troy & Schenectady) did something almost unheard of. It crossed an Interstate Highway at grade!

Now, the full facts on this highly  unusual event can be found from Gino DiCarlo.

The former Troy & Schenectady line was still operating when the Northway (I-87) was built (1960’s) and there still was a grade crossing on the Northway a short distance south of the “Twin Bridges” over the Mohawk River (this was probably one of only a very few grade crossings on an Interstate Highway in the United States). It wasn’t there long, as the line was cut back within a couple of years to an industrial site just east of Route 9. You can still see where the line passed under Route 9 perhaps a mile north of Boght Corners.

During the period that the line crossed Interstate 87 (ETT has a typo “89”) at Dunsbach Ferry, the following instruction appeared in the Employee Time Table under “special instruction 103 public crossings at grade: Manually controlled traffic signals:” “Trains or engine must stop in rear of stop sign and a member of crew must operate pushbuttons in manual control box. After traffic signals have been operating for at least twenty seconds train or engine may proceed over crossing, signals must be restored to normal position after movement over highway has been completed.”

See some photos from Google Earth of the crossing location.

The only interlocking on the T&S was NYCRR Signal Station 8 at Schenectady, which governed the junction of the T&S and the Mohawk Division Main Line, and the T&S crossing of the Delaware and Hudson. At Green Island, a signal governing movements on the switch that joined the T&S with the D&H Green Island Branch was controlled by Troy Union Railroad Tower 3 on River Street in Troy.
From Gordon Davids

Once we “designed” a fantasy model railroad. The highway crossing remained. we can only cross Interstate 87, the Northway, between the hours of 2 am to 5 am.

2 thoughts on “Crossing The Northway (by Train!)”