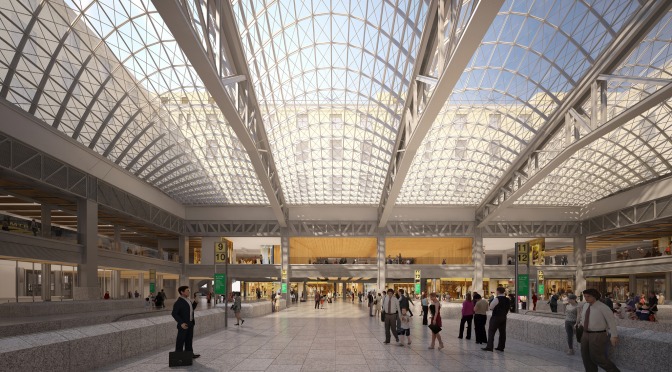 The Empire State Development Corp., the organization that will oversee the $3 billion redevelopment of Penn Station and the Farley Post Office Building in Midtown Manhattan, has released a request for proposals (RFP) for the project.

The RFP was issued jointly by the corporation, the state of New York, Amtrak and the Metropolitan Transportation Authority (MTA) just a few weeks after Gov. Andrew Cuomo outlined his vision for redeveloping the station and post office into a passenger-rail hub that will be known as the Empire Station Complex.

The existing station, which is located beneath Madison Square Garden, will be dramatically renovated, and the post office building will be transformed into a train hall for Amtrak, which owns the station. The hall also will offer services for MTA Long Island Rail Road, New Jersey Transit and the new Air Train to LaGuardia Airport.

According to the solicitation document, the complex development will consist of three major components:
• redevelopment of Penn Station’s upper and lower levels;
• additional project enhancements at Penn Station (as described in the document); and
• adaptive re-use of the Farley Building, including the Annex and Moynihan Train Hall.

The deadline to submit responses is April 22.