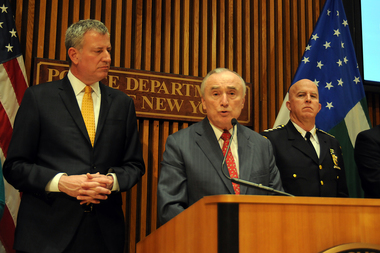 CIVIC CENTER — A recent spike in subway slashings were in part due to an overcrowded subway system that leads to tempers flaring after people jostle each other, officials said Wednesday.

Felony assaults were up 18 percent in January, including 10 slashings and stabbings in January, compared with 2015, while major crime was down nearly 6 percent, according to NYPD crime numbers. And one way to address that issue would be to expand service on a system that sees about six million riders a day.

“Tempers are short when you can’t get on a subway car that is overcrowded, that on the subway car somebody inadvertently with a backpack swings around and ends up striking you,” Police Commissioner Bill Bratton said during the press conference at NYPD headquarters.

“It is overburdened, the MTA, everybody recognizes that.”

“The new trains they are looking at buying, as you saw the other day, was not separated between cars and that will increase capacity by 10 to 20 percent, which will also facilitate people moving from one end of the car to the other, will be very helpful to us patrolling in the sense of not having 10 isolated cars on the subway.”

Police will also take immediate steps to reduce the violence, including increasing the number of officers in the subway system.

“What you are going to be seeing over the next couple of weeks is additional uniforms down in the subway,” said NYPD Chief of Department James O’Neill.

Apart from the additional service and officers, the commissioner recommenced riders not take naps during their ride.

“We believe almost 50 percent of the reported crime in the subway involves sleeping passengers,” Bratton said. “I remember 1967 in Vietnam listening to a favorite performer of that era, Petula Clark, had a very significant hit song, ‘Don’t Sleep in the Subways, Darling.’”

“The NYPD has done an incredible job of keeping crimes in check even while ridership rises, which is why the risk of being the victim of a felony on the subway is roughly one in a million,” said spokesman Adam Lisberg in an email.

In the most recent attack, a 30-year-old man was slashed on a 3 train Monday by a man who was pacing back and forth on the Pennsylvania Avenue station platform before the attack.

Mayor Bill de Blasio emphasized that incidents like the 3 train attack were isolated and the subways were still safe.