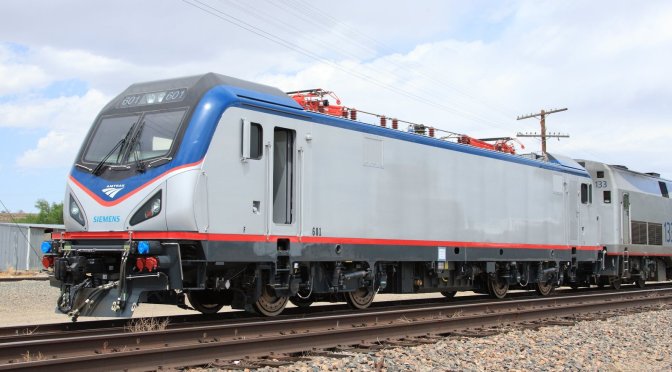 Amtrak‘s new advanced-technology electric locomotives are now in service along the Northeast Corridor, marking one of the latest components of the railroad’s sustainability program, Amtrak officials announced yesterday.

The Siemens ACS-64 locomotives, which will save the cost of about 3 billion kilowatt hours of electricity and cut greenhouse gas emissions during the next decades, are part of Amtrak’s commitment to following sustainable practices in its operations, Amtrak officials said in a press release.

Designed for easier maintenance, the locomotives maximize energy efficiency by using a regenerative braking system that feed energy back to the power grid.

Amtrak also is a member of the Carbon Disclosure Project (CDP), which reports on climate change initiatives. On its most recent submission to the CDP, Amtrak received a score of 99B. The 99 out of 100 reflects Amtrak’s commitment to comprehensive and transparent reporting of greenhouse gas data and climate-related risks and opportunities. The B represents the performance band and measures the company’s actions to promote climate change mitigation, adaptation and transparency, Amtrak officials said.

Renovations to the century-old stations will include improved platforms and overpasses, new stairways and handrails, repairs to canopies and columns, painting and rehabilitation of historic head house entrances and fare control areas, enhanced safety features, and upgraded communication systems, NYCT officials said in a press release.

Crews also will add modern amenities such as new lighting and station artwork, as well as Help Point Intercoms to get in touch with the MTA’s rail control center for information or in the case of emergencies.

Two stations will receive accessibility improvements as part of the renewal: two Americans with Disabilities Act-compliant ramps will be added to the 8th Avenue station, while four elevators will be installed at the New Utrecht Avenue station.

Funded under MTA’s 2010-2014 capital program, the contract for the nine stations pre-dates New York Gov. Andrew Cuomo’s recently announced plan for rapid design and renewal of 30 additional subway stations. However, the agency will work with contractors involved to push for greater efficiency in the renovation process, NYCT officials said.

The work will be completed in two phases. The Manhattan-bound platforms at all nine stations will be the first to close for rehabilitation starting Jan. 18 and continuing for 14 months. After that work is completed, work on the Coney Island-bound side of tracks will begin.

Preliminary preparation work began in April 2015 on various elements of the project, including renovation work on subway, construction of temporary platforms at two stations, pruning trees from along the tracks and renovation of unstaffed control areas, NYCT officials said.

Norfolk Southern is doing more with its property than just talk about mergers with Canadian Pacific.

The Albany Times-Union has been covering this recently. Norfolk Southern has been working on the former Delaware & Hudson line from Albany to Sunbury, Pa., that it purchased in 2015 from Canadian Pacific Railway.

NS has been inspecting the tracks and bridges, and plans to replace thousands of wood ties and “resurface” at least 40 miles of track and possibly as may as 80 in 2016.

NS also is actively seeking to build freight business along the line. The acquisition has eliminated interchanges with CP, enabling it to offer shippers faster service.

The former D&H line also brings NS trains closer to the Mechanicville intermodal yard, which the railroad operates as a joint venture with Pan Am Railways. Pan Am Southern, as the venture is called, operates east to Ayer, Mass., outside Boston.

The $217 million D&H purchase puts NS in direct competition with CSX between Albany and Chicago. The line crosses NS’ Southern Tier line at Binghamton, which connects the Midwest and the New York City metropolitan area.

CP will likely keep the line from Montreal to Albany, over which it moves crude oil and ethanol to the Port of Albany. That line has thrived, moving fracked oil from the Bakken fields of North Dakota to the port.