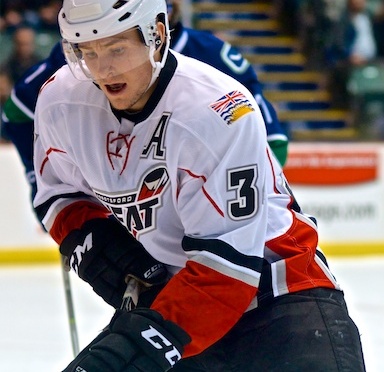 The Utica Comets had no answers for the Toronto Marlies offense in a 7-1 loss at the Ricoh Coliseum on Sunday afternoon. The loss caps off the Comets 0-for-2 weekend north of the border.

Carter Bancks provided the goal-scoring for the Comets (1-0-1), while Richard Bachman suffered the loss by allowing four goals in just 12:11 of action.

The Marlies jumped out to an early lead just 3:44 into the game. Brett Findlay’s pass to Connor Brown appeared to be intercepted by LaBate in the slot. However, the mishandled puck found its way onto the stick of Brown who quickly flicked it past Bachman’s glove.

For the second game in a row the Marlies captured a 2-0 lead, this time courtesy of a David Kolomatis wrist shot into the top shelf.

In a span of exactly two minutes, Connor Brown scored his second goal of the game and T.J. Brennan added his 16th goal of the season to extend the home team’s lead to 4-0.

The second period had more of the same as a three-on-two rush just four-and-a-half minutes into the period ended with the Marlies fifth goal. T.J. Brennan dinged a shot off the crossbar-and-in for his second goal of the game.

With the Comets on their first power-play of the evening, the Marlies found a way to strike again. A pass from Rinat Valiev sprung Brendan Leipsic on a breakaway that he would not miss on.

The Comets finally got on the board late in the second period when Carter Bancks slipped the puck through the legs of Antoine Bibeau. Jordan Subban connected on a defense-breaking long pass from the Comets zone to set-up the breakaway. Jon Landry picked up the secondary assist.

The Marlies lead was extended to 7-1 when Mark Arcobello wristed a shot past Cannata after he skated through a pair of Comets defenders just under three minutes into the third period.

The Comets three-game road trip concludes next week at the Times Union Center in Albany, NY. The Comets and Albany Devils are scheduled for a 7p.m. puck drop.