The existing station, which sits beneath Madison Square Garden, will be “dramatically” renovated, according to a press release issued by Cuomo’s office.

The Farley Post Office will be redeveloped into a “state-of-the-art” train hall for Amtrak, which owns Penn Station. The hall also will offer services for passengers of the MTA Long Island Rail Road, New Jersey Transit and the new Air Train to LaGuardia Airport.

The new facility will offer more concourse and circulation space, and offer retail and modern amenities. When completed, the entire hub will be known as the “Empire Station Complex.”

“Penn Station is the heart of New York’s economy and transportation network, but it has been outdated, overcrowded and unworthy of the Empire State for far too long,” said Cuomo. “This proposal will fundamentally transform Penn Station for the 21st century, and we are excited to move forward with the project in the days to come.”

The original Penn Station was built in 1910. The station’s above ground area was demolished in the early 1960s and Madison Square Garden was built in its place. What is now Penn Station exists entirely underground. It is the main intercity railroad station in the city, and serves more than 600,000 commuter-rail and Amtrak passengers daily.

A public-private partnership will develop the project, with groundbreaking anticipated for this year. Solicitations are being sent to developers this week, and responses are due in 90 days. Amtrak will issue the solicitations for the station, and the state of New York, which owns the Farley Post Office building, will solicit proposals from developers for that part of the project.

The construction cost is expected to be more than $3 billion, including $2 billion for redeveloping the station and post office, and at least $1 billion for ancillary retail and commercial developments between 7th and 9th Avenues. About $325 million of the funding is expected to come from government sources, including the U.S. Department of Transportation, the Port Authority of New York and New Jersey, and Amtrak.

Nearly all of the work will come from private investment, in exchange for an interest in the long-term revenue that will be generated by retail and commercial rents, Cuomo administration officials said.

Amtrak President and Chief Executive Officer Joseph Boardman praised Cuomo for his “leadership, vision and commitment” to the expansion of passenger-rail capacity in New York City.

“We’re proud to work closely with the governor, the Empire State Development Corp. and others on his team to help lead a rail renaissance in Manhattan,” Boardman said in a prepared statement.

Yesterday’s announcement was the latest in a series of statements that Cuomo has made in recent days to lay out his program for improving transportation infrastructure across the state. Earlier this week, the governor unveiled a plan to expand capacity on MTA Long Island Rail Road by adding a third track between Floral Park and Hicksville.

Canadian Pacific Railway CEO and Director E. Hunter Harrison told investors last week that he expects rail consolidation among the largest North American railroads within six years, but his ideas are more than just the usual rumors. One of which is that Kansas City Southern Railway, the smallest of the major railroads, will merge with one of the five other Class I carriers or a third-party that merges two railroads. The major benefit to a KCS buyer would be gaining the only cross-border rail network that connects the U.S. to Mexico’s rapidly growing manufacturing base.

What if each of the western U.S.-based Class I railroads — BNSF Railway and Union Pacific Railroad merge with an eastern counterpart. BNSF or UP, for example, could merge with CSX Transportation or Norfolk Southern Railway. Such a merger wouldn’t “impact the competitive environment,” and shippers would gain better service by having two transcontinental lines. Shippers with access to only one line, who refer to themselves as “captive shippers,” could benefit as well.

Under a dual transcontinental merger scenario, the need for handoffs at the Mississippi River or in Chicago would be reduced, speeding up transit times. The mergers also would reduce corporate costs, because two sets of management would be redundant, and some railyards could be consolidated.

Traditionally, Chicago was the Rail Capital of the United States. Will new Chicago Bypasses develop? What about companies like UPS who rely on Chicago traffic? Union Pacific was created by Abraham Lincoln and Congress to “span the Continent”.Will this happen? A transcontinental merger wouldn’t create major cost savings, nor would it greatly improve service, because interline traffic generally runs smoothly.. Railroads’ differing cultures would only complicate a process. I remember when CSX had just taken over the Selkirk Yard near Albany. There was a blizzard and Selkirk shut down. CSX sent a team of executives to solve the problem. They arrived at the Albany County Airport (built in the 1930’s and not shut because they used strange contraptions called snow plows. These characters arrived in raincoats and rubbers and carrying umbrellas.

The most likely consolidation scenario is a merger or acquisition involving KCS, but the railroad’s high valuation likely is keeping suitors at bay. Acquiring or merging with KCS seven or eight years ago before the railroad’s cross-border business began to take off would have made sense.

The greatest potential for rail consolidation isn’t in the Class I industry but within the small lines that connect to the major railroads. Let’s start with Florida East Coast Railway. Not likely. They are gearing up for the Panama Canal expansion plus their parent company is building a Miami to Orlando passenger train. Just announced purchase of 24 new GE locomotives (see picture at top) .

Genesee & Wyoming, an owner and operator of short lines and regional freight railroads, is best poised to swallow up other lines because the company has access to some $400 million in capital and is the largest strategic player, according to a Stephens research note. Of the 459 privately owned U.S. regional and short lines, which make up about 80 percent of the market, G&W’s network connects with 48 of the lines. Like the larger railroads, many of G&W lines, which total 98 in North America, are seeing intermodal traffic growth. 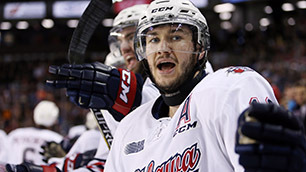 The Utica Comets surrendered a late short-handed goal to the Hershey Bears to break a 3-3 tie, before ultimately losing 6-3 at the Giant Center on Sunday afternoon. The loss sends the Comets to their sixth straight defeat after gaining a point in 14 of 16 games.

The Comets surrendered the first goal for the seventh time in their last eight games just 3:22 into the game. From just inside the blue line, Chris Bourque ripped a slap shot that found its way through heavy traffic in the slot, and into the net for the 1-0 lead.

Three minutes later an unlikely trio for the Comets reset the game. In just his second game since signing a PTO, Michael Pereira received a pass from John Negrin before he stepped into a wrist shot that went through the legs of Dan Ellis. Goaltender Joe Cannata picked up the secondary assist on the goal, his first point as a Comet.

Halfway through the second period, the Comets lone All-Star representative put the Comets ahead for the first time. Joseph LaBate gained entry to the Bears’ zone and flicked a shot on net as he absorbed a check. Hunter Shinkaruk drove to the net hard and buried the rebound into the top shelf for his team-leading 15th goal of the season.

22 seconds later the Bears answered back when Sean Collins clanked in a shot off of the post while on a two-on-one rush.

Five minutes later the Bears had their second lead of the night when Liam O’Brien’s shot was originally blocked by Wacey Hamilton but dribbled its way into the Comets net.

The Comets started the third period with a power play thanks to Carter Bancks drawing a tripping penalty on Ryan Stanton in the waning seconds of the second period.

With the power-play unit established, Michael Zalewski whipped a hard pass to Joseph Labate in the slot. LaBate redirected the pass over the shoulder of Ellis to tie the game at three. Cole Cassels picked up his second assist of the night on the goal.

The Comets power play unit giveth, and then taketh away.

A mishandled puck while on the attack led to a quick two-on-one rush for the Bears. Jordan Subban laid out to take away the pass, but Dustin Gazley was still able to get the pass over to Collins who had an easy back door tap-in for the game-winning goal.

Two empty-net goals for the Bears ran the final score to 6-3.

The Comets return to The AUD for some home cooking against the division leading Toronto Marlies on Wednesday night. Puck drop is scheduled for 7pm.