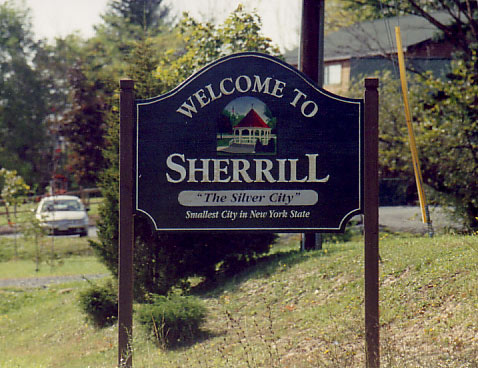 The small city of Sherrill, whose claim to cityhood has been grandfathered in as incorporation rules have changed over the years, turns 100 next year.

Sherrill was primarily founded by Oneida Silversmiths, a company sprung from the mid-1800s as a religious community whose prime tenet was perfectionism.

“Urban legend has it that the Bible utopian society, the Oneida community — the group which started making beaver traps in the mid-1800s and later went on to form Oneida Silversmiths then silverware manufacturer Oneida Ltd. — wanted to created a community surrounding themselves and their industry,” said city comptroller Michael Holmes in a tongue-in-cheek manner.

By 1913, there were rumbles of making the hamlet that sprung up around the Bible commune and accompanying company an official entity.

Sherrill, the city that technically should not be a city, saw its beginnings on April 7, 1916.

By a special act of the state Legislature, Sherrill became a city with a commissioner form of government. The 3.2-square-mile community became New York’s reigning smallest city, with a current population of about 3,200, said city Manager Michael Sayles.

Another municipal oddity, is having a city within a town — Sherrill rests inside the town of Vernon.

In 1887, citizens were sick of getting mail in neighboring communities of Kenwood or Oneida Castle, and appealed to James Schoolcraft Sherman, who later became vice president of the United States. To establish a post office, the community needed a name. The name Sherrill was the name of Sherman’s youngest son.

One thought on “Sherrill, New York: Smallest City in State; as Anniversary”