Just like we need to breathe in this moment, for life to take us to the next moment, similarly we need a little inspiration, for our time to take us into the next phase of life.

Sometimes we think too much about things which already happened in our life or things which we fear that may happen in the near future. This makes our present angry on us as we don’t give enough attention to it. Yes, our present is an attention seeker. Keep it happy. Our present is the only portal that can fulfill our dreams of tomorrow. Cherish your memories of yesterday and learn from the mistake of yesterday so that you can build new memories of tomorrow without making any wrong choices for your life.

Christmas is a time for remembering everything that has come before us. It’s not a kind of memorial day when we remember what we lost, but instead a day to remember the great gifts that have come to us over the many years. The circle of gratitude is widened every year as the holiday expands with new love and new memories.

This is a special Christmas because fifty years ago we received one of the great gifts of television, “A Charlie Brown Christmas”. In many ways this defines the tension of Christmas itself, even though very little in popular culture has been willing to decry the commercialism that is the true “War on Christmas”. And in the process it gave us a new definition of holiday cheer, bringing Vince Guaraldi’s cool jazz into the warm holiday like a sprig of winter itself.

What will be the answer if in western countries which is bustling with life and activity one were to ask how many real men lived; men whose hearts throbbed and eyes wept for the sake of humanity; men who controlled their carnal desires and were the riders and not the mounts of this civilization; who held the reins of life instead of being driven by it; who knew their Creator and whose hearts were filled with love for him and respect for mankind; who led a simple life, in harmony with nature, and were aware of true joys and genuine pleasures; who did not like tensions and conflicts in the world and hated the selfishness and greed of the politicians; who wished every country well and wanted it to prosper; who were eager to give and not to grab; who did not believe that the aim of life was only…

All Aboard Florida wants more time to sell $1.75 billion in tax-exempt bonds it plans to use to help pay for its proposed passenger train service connecting South Florida to Orlando.

The Coral Gables-based company has asked the U.S. Department of Transportation to extend a Jan. 1 deadline that federal officials set for the bond issue. The request marks the second time All Aboard Florida has asked for an extension.

All Aboard Florida had planned to sell the bonds this year, but the tight municipal bond market forced the company to shelve the sale.

Federal transportation officials are evaluating the company’s request for an extension.

All Aboard Florida, which announced in November that its train service will be called Brightline, said the company remains committed to the project.

“Our request to USDOT provides us the flexibility to structure financing in a way that serves the best long-term interest of our business,” Mike Reininger, president of All Aboard Florida’s Brightline said in a statement released by the company. “We remain committed to delivering service from Miami to Orlando and have made significant advancement with our construction to begin Brightline operations in 2017.”

Opponents of the rail project took aim at All Aboard Florida’s request, saying it is a sign of uncertainty.

”The fact that AAF was unable to sell its bonds has prompted them to ask for a second extension from the USDOT. This is a reflection of the project’s weakness,” said Brent Hanlon, the treasurer of CitizensAgainstRailExpansion, also known as CARE FL, an opposition group that has been fighting the rail project.

However, All Aboard isn’t alone in postponing bond issues. Other high-yield borrowers have also been forced to postpone sales. Plus, concern about capital markets has been steady since the summer.

“High yield bonds, leveraged finance, leveraged buyout loans, they all had a bad second quarter and a bad third quarter,” Chris Kotowski, an analyst at Oppenheimer & Co. in New York, told The Palm Beach Post in October. “The market has been dreadful.”

AllAboardFlorida won preliminary approval from the Department of Transportation in December 2014 to issue the private activity bonds. The company was initially given until July 1 to complete the sale.

In May, All Aboard announced it was seeking an extension of the July 1 deadline and the company was ultimately given until Jan. 1 to finalize the sale.

The Florida Development Finance Corp., a special financing unit authorized by the state Legislature to issue tax-exempt bonds to private entities, approved the sale in August.

Under the plan, the FDFC will act as conduit issuer of the bonds, which will be sold by All Aboard Florida to private investors.

According to documents filed with the FDFC, the 30-year bonds will not be rated and will be sold only to accredited investors and qualified institutional buyers. The minimum denomination will be $100,000. Neither taxpayers nor state and local governments are on the hook for the money if the project should fail.

There has been $15 billion set aside at the federal level for tax-exempt, private activity bonds that help pay for transportation projects. The program is designed to increase private sector investment in U.S. transportation infrastructure, federal officials say.

As of Nov. 19, $5.9 billion in bonds had been issued for 15 projects. Another $5.6 billion has been allocated for six projects, including All Aboard Florida.

The Coral Gables-based company’s $1.75 billion allocation is the largest on the federal list. Next in line: $1.3 billion for The Purple Line, a 16-mile light-rail project planned in Maryland.

Although the bond sale has been put on hold, All Aboard Florida has continued to move forward with construction of the first phase of its project between Miami and West Palm Beach. The bonds would be used to fund the project’s second phase from West Palm Beach to Orlando.

In Palm Beach County, All Aboard has crews working at several crossings along the Florida East Coast Railway corridor. Construction at the site of the company’s station in downtown West Palm Beach has also continued.

The company plans to run 32 trains a day along the FEC tracks with stops in Miami, Fort Lauderdale, West Palm Beach and Orlando. All Aboard Florida plans to launch service between Miami and West Palm Beach in 2017. The West Palm Beach-to-Orlando span is expected to begin by the end of 2017. 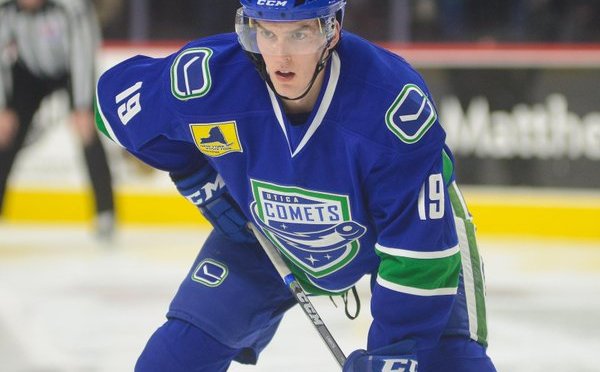 Down 4-3 late in the third period to the North Division leading Toronto Marlies, the Utica Comets found a way to strike twice in 1:16 of game action to defeat the Marlies 5-4 in overtime. John Negrin’s goal with a minute left tied the game before Alex Friesen’s short-handed tally 16 seconds into overtime ended the game.

The scoring kicked off on a Comets three-on-two odd man rush. Blair Jones cut across the top of the circle, to the high slot, and slid a backhand pass through the skates of a Marlies defenseman, and onto the stick of Subban. Subban quickly flipped a backhand to the far side of Jonathan Bernier as the goaltender slid across the crease. The goal stopped Bernier’s shutout streak at 203 minutes and 38 seconds. Blair Jones’ assist on the goal was the 300th point of his professional career.

The Marlies evened the score when Matt Frattin emerged from the corner uncontested and slipped a sneaky backhand over Cannata’s shoulder for a power-play tally.

A minute into the second period Friesen reestablished the Comets lead. On a two-on-one rush, Friesen cut to the hashmarks and let a wrist shot loose that beat Bernier. Jon Landry picked up an assist on the play.

Just 50 seconds later Zalewski cashed in with a highlight-reel worthy goal. With one hand fighting off a Marlies defender as Zalewski drove to the net, he used his one free hand to flip the puck up-and-over the extended leg pad of Bernier.

Utica appeared to have stretched their lead to 4-1 when Ashton Sautner put the puck into the net behind Bernier. The on-ice officials convened and controversially waved the goal off, citing incidental goaltender’s interference in the crease. The replay appeared to show a Marlies defender grazing Bernier, who was positioned about two feet outside of the crease.

From there, the Marlies mounted their comeback.

The comeback was kicked off when Eric Faille slipped a shot past Cannata. William Nylander, the American Hockey League’s points leader, forced the game’s third tie when an uncontested, point blank shot from just above the crease slipped through the pads of Cannata, with just 27 seconds left in the second period.

After the Comets took a too many men penalty, Mark Arcobello capitalized eight seconds into the power play to give the Marlies their first lead of the game.

With the game looking dire for the Comets, and their net empty in favor of an extra attacker, Negrin fired a shot through heavy traffic in the slot, and past Bernier to tie the game at 4 with exactly a minute left. Subban and Linden Vey recorded assists on the goal.

With Wacey Hamilton in the penalty box for a slashing minor, Alex Friesen stepped up and provided the heroics.

With the Marlies trying to gain entry into the Comets zone, Travis Ehrhardt forced a turnover that sprung Friesen on a breakaway. With a defender draped over his back, Friesen got enough on his shot to slip the puck through the leg pads of Bernier and win the game for the Comets.

The Comets return to The AUD on Wednesday night to take on the Rochester Americans at 7 p.m. A limited number of tickets are still available via EmpireStateTix.com.