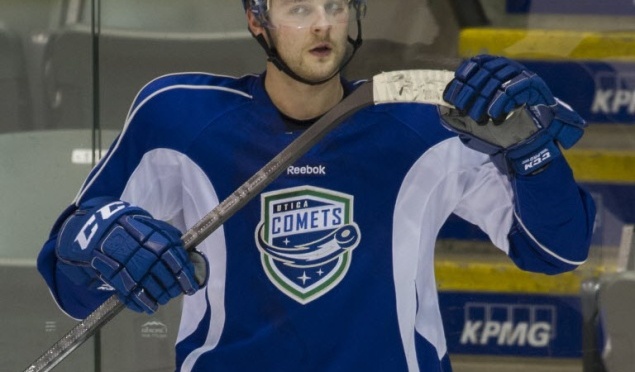 The Utica Comets and Syracuse Crunch added yet another unbelievable chapter to the ever-growing I-90 rivalry on Saturday night. The Comets scored four third period goals in the final 8:32 of the game to erase a 2-0 Crunch lead at the War Memorial at the OnCenter. The win serves as the Comets first third period comeback victory of the season, as well as the Crunch’s first blown third period lead.

“I loved the way the guys stuck with their game,” said Comets head coach Travis Green. “ (They) Played good the first two periods and stayed the course. It is nice to see them rewarded.”

The Crunch broke the scoreless tie with a minute left in the first, with a power-play goal. From just above the goal line, Adam Erne one-timed a pass from Matthew Peca, across the crease to Tye McGinn who banged it into the gaping net.

Again on the power play, Tambellini slipped down from the point, unnoticed, received a pass from Matt Taormina, and fired a shot over the glove of Bachman to double the Crunch’s lead.

The Comets broke Kristers Gudlevskis shutout bid, and cut the deficit to one, thirteen minutes into the third period. Darren Archibald forced an offensive zone turnover and slid the puck over to Linden Vey. Vey drew the Crunch defender over to him before passing it across the slot to Jensen, who banked it into the net off of a diving Gudlevskis.

The Comets tied the game just over three minutes later. Travis Ehrhardt intercepted a clearing pass up the wall, and flicked a quick shot on net. Gudlevskis made the save but directed the rebound into the slot and right onto Hamilton’s stick. Hamilton, from his knees, fired hit past the sprawling goaltender to knot the game at two.

Just 54 seconds later the comeback was completed. Michael Zalewski, on a fast break, passed it to a trailing Alex Friesen. Friesen juggled the puck around DeAngelo, fired a shot off of the mask of Gudlevski, and then jammed the rebound home before the goaltender could find the puck. The goal prompted a loud reaction from the Comets faithful, as the familiar “U-TI-CA” chants rang out during the final two minutes.

Grenier added an empty-net goal for good measure with 17 seconds to play.

“Anytime we can win against Syracuse is a big win for our team,” said Wacey Hamilton. “We know how big the rivalry is and how important these divisional games are. To get two points was huge, and to do it in that fashion made it a little sweeter.”

The Comets brief two-game road trip concludes on Wednesday night in Rochester, when the Comets take on the Rochester Americans. Puck drop from the Blue Cross Arena is scheduled for 7pm.