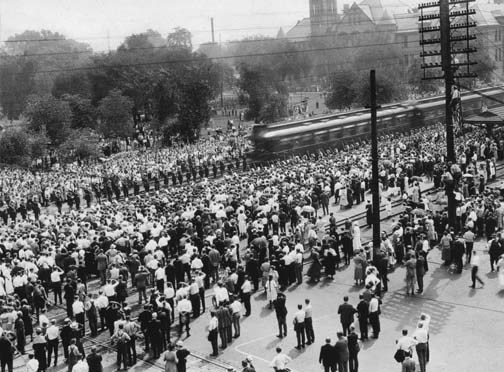 Over the years we have written a lot about trains run for the Presidents of the US. We have done some on their funeral trains but not recently except Lincoln and FDR.

The train carrying the body of President Warren G. Harding traveled across the country from California, where he died on August 2, to Washington, D.C., for the funeral.

President Warren G. Harding traveled west by rail out of Washington, D. C. aboard the Pullman Private Car Superb in June 1923, to revitalize both his health and his rapport with the American people. He failed the first objective and briefly met the second. Dying of a heart attack in August, he returned to Washington, D.C., in a casket, and then onto Marion, Ohio, for burial, uniting the country in grief.

Warren G. Harding’s administration was plagued with scandals like Teapot Dome. He may have learned enough about the corruption in his cabinet and appointments before his death to realize that his presidency was about to crumble. Harding set out on a cross country trip of good will to explain his policies to the people. He suffered from high blood pressure and an enlarged heart. The strenuous trip took its toll. He was the first President to visit Alaska and seemed to enjoy his time there, but on the return south he fell ill. His train reached San Francisco and on July 29, 1923, he checked into the Palace Hotel, room 8064. Soon after, doctors determined that he had pneumonia. By August 1st his fever and accelerated pulse had subsided. He made plans to go fishing the next day off Catalina Island. That night Mrs. Harding read to him to help lift his spirits. She read a flattering review of his presidency by Samuel Blythe of the Saturday Evening Post. He fell asleep and Mrs. Harding left the room. Later a nurse entered to check on the President and noticed that his face was twitching, his mouth dropped, and his head then rolled to one side. It was concluded that he suffered a stroke. There is evidence that he had long suffered from heart problems and could have had a sudden heart attack. Rumors abound that the actual cause of death may have been food poisoning, perhaps by Mrs. Harding, or the mob. Mrs. Harding did not allow an autopsy to be performed.

Harding’s sudden death while on a tour of the west turned his train into a funeral train for the return trip to Washington. The train was draped in black, but not elaborately. Harding’s body was placed in the drawing room at the Palace Hotel on Friday and moved to the train that evening. The train departed at 7:15 p.m. After passing slowly through many of the towns along the way to allow mourners a view, the train arrived in Washington on Tuesday, August 7th, at 10:22 p.m. Harding’s body was removed to the White House, and then on Wednesday laid in state at the Capitol Rotunda where a funeral service was held. Some 10,000 school children were recruited from Washington’s playgrounds to strew Pennsylvania Avenue with flowers as the funeral procession moved from the White House to the Capitol. Wednesday evening the train began the journey home to Marion, Ohio, arriving Thursday, August 9, 1923.

Prior to the trip, Pullman outfitted the car with a public address system for whistle stop speeches and a transmitter for broadcasting. This was the first nation-wide broadcast of Presidential speeches and the first time a car of this type was fitted with wireless equipment.

See a video of Harding’s Funeral Train passing through Chicago. Funeral train for the 29th President of the United States, Warren G. Harding, who passed away on August 2nd, 1923. Scenes include Kedzie Station; the crowd waiting for the train to arrive; the Elks Committee waiting to meet the train with wreath; the Medinah Temple Committee with wreath; City of Chicago Committee with wreath; Boy Scouts; veterans and military honor guard; arrival of train at station and train leaving station; crowds follow train; and Dr. Harding, President’s first cousin, with wreath.

The funeral train of President Warren G Harding in August of 1923 In Clinton Iowa.

It drew a large crowd when it passed through Cedar Rapids. Greene

Square Park and the old Washington High School are seen in the background.
The honor guard lined up on both sides of the railroad tracks.

President Warren G. Harding’s funeral train passed through Canton on its way to his hometown of Marion.

Harding’s funeral train car is sitting in the Southeastern Railway Museum in Duluth, Ga. At the time we did our first-pass restoration of the car, Malcolm Campbell wrote this article for the museum’s web site:

The Superb, which opened to the public in 1995, after an 18-month restoration project, is classified as a heavyweight. Heavyweight cars are distinguished by a riveted carbon steel body, six-wheel trucks, clerestory roof, a steel underframe shaped like a fish belly, and a concrete floor. These cars were so durable that many were in mainline service into the 1960s.

Built in 1911, the Superb is the second oldest heavyweight private car in existence, and the oldest that is still as built by Pullman.

Harding’s 10-car Presidential special traveled to Tacoma, WA, with intermediate stops at St. Louis, Denver, Salt Lake City, Butte, MT, Spokane, WA, and other cities. After a side trip to Alaska by ship, the President became ill and was rushed south to a San Francisco hospital where he died August 2. The last photograph of Warren G. Harding was taken as he left the Superb at Southern Pacific Station.

On August 3, slightly less than 24 hours after his death, Harding’s casket was placed back on board the Superb. The funeral train left the station behind a Mogul locomotive with a clanging bell; the growing crowds there were the first of an estimated 3,000,000 people who lined the tracks eastward to pay their last respects.

Today, the Superb is the only existing railcar to have carried the casket of a President during his term in office.

Prior to Harding’s trip, President Woodrow Wilson used the car on occasion. In 1926, it was painted red and temporarily re-named Pope Pius XI for use in the “Cardinals Train”

that carried church officials from New York to Chicago for a Eucharistic Congress. During World War II, it saw service as a supply and porter car in New Jersey.

During most of the years between 1928 and its 1969 retirement, the Superb operated as a business car for the Charleston & Western Carolina Railroad. When successor railroad Seaboard Coast Line donated the car to the museum, it carried only a number. With its name removed, the Superb was lost to history for a time.

Time has done its damage in 87 years, but these heavyweights were built to last. The restoration project moves forward as we focus on those brief moments in 1923, when the Superb was the very center of the nation’s attention.