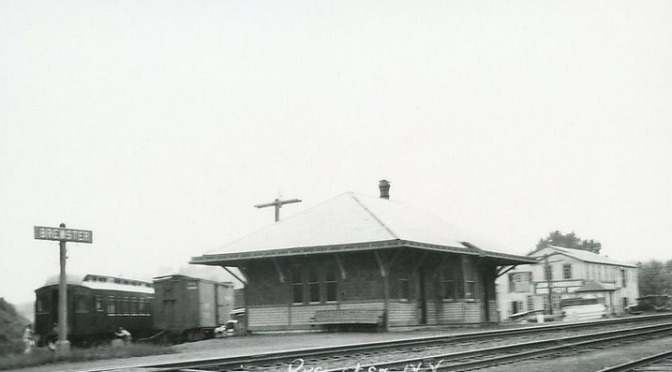 I know that many of you have seen “MY” WebPage  www.ominousweather.com/Penney.html

From time to time I will add more pictures and facts. The most important in Brewster is the railroad. So lets talk a little about it.

In 1848, the Harlem Line reached “Brewster’s Station.” A rival company began building the Hudson Line in 1835, reaching Albany by 1849. By the early 1850’s the Harlem Line had revenues of one million dollars a year and transported nearly three million passengers at a fare of two and a half cents per mile.

The railroad helped boost population and travel to Brewster.The freight trains on the Harlem Line carried mainly iron ore, animals, and dairy products. Dairy, lumber, mining, and circus businesses in Putnam County benefited from the new mode of transportation.  Trains helped carry heavy material for these businesses including both raw and processed materials.  The railroad also dispersed large quantities of material that could not be used locally.

Initially, farmers were against the development of the railroad as the train tracks frequently ran through their property.  They feared the danger this posed to their animals, the loss of prime low lands, and the damage to their crops by soot and smoke.  Opposing farmers were soon convinced of the benefit of the railroad as it further opened the New York City market to their goods. In the 18th and early 19th century goods were often sent across the county to Cold Spring where they were loaded onto sloops headed for New York City. The railroad provided a faster and more direct route to the New York City market.

The opportunity for growth encouraged Gail Borden to open a milk condensery in Brewster in 1863.  The Borden factory became a major employer for the area.  Close to 80,000 quarts of milk were condensed daily Monday through Saturday with finished products sent, via railroad, to New York City.

The railroad helped in the growth of local mining interests most notably the Tilly Foster Iron Mine. Previously, the expense of transporting the iron ore to the blast furnaces in Pennsylvania where steel was produced hindered the rapid development of the mine.

The railroad was instrumental in the development of the Croton Water System in the 1890s. It made it easier to bring supplies and materials for construction of the aqueduct, dams and related facilities. Traffic of milk from Brewster farms decreased during this era as many farms were condemned to protect the purity of the watershed. The milk business also began to decline as refrigerated train cars made it possible for New York City to obtain fresh milk from upstate New York and New England.

Brewster was an important station since it was the main service point for steam engines on the line.  There were 15 to 20 stalls for servicing engines and a turntable.  The Harlem Line employed many engineers, brakemen, firemen, and mechanics, most of who lived on North Main Street near the depot.  In 1952 diesel trains were introduced and the roundhouse was no longer needed and it was demolished.  The Harlem Line was electrified to White Plains by 1912. However it wasn’t until 1984 that the line was electrified to Brewster North.

In 1881 the Putnam line also began running through Brewster, and Brewster with its 2 lines became known as “the Hub of the Harlem Valley.”  “The Put”, as the line was called, connected 155th Street and Highbridge in the Bronx to Brewster, which meant it really served Westchester County.  “The Put” was electrified in 1926.  The Putnam line freight cars usually carried iron ore, milk, and ice. The freight business of railroad began to diminish as airplanes and trucks started to ship products faster. On  May 29, 1958 the last train service ran on the Putnam Line.

One thought on “Some Cool Things About My Birthplace of Brewster, NY”